Chevy is elbowing its way into the off-road market at various levels — such as the Colorado ZR2 and Silverado Trailboss. With the Detroit automaker set to introduce the 2020 Chevy Silverado HD sometime late next year, new spy photos over at TFLTruck.com shows a camouflaged version heavy-duty pickup truck with a few interesting bits that could make this a Silverado HD Trailboss model with a new Duramax diesel engine under the hood.

The heavy-duty Silverado is no secret. There are countless spy photos of the truck along with one lone teaser the automaker released back in April. Since then, things have been quiet. Chevy released a teaser darn near 18 months ahead of the truck’s is scheduled on-sale date. That allows for products to change, or, maybe, get a new additional trim, such as a Silverado HD Trailboss.

The photos show a Silverado HD pickup with what looks like a slightly raised suspension over other HD prototypes spied in the wild. TFLTruck.com reports there could be Rancho off-road shocks underneath. Right now, this is just speculation, but it would make a great addition to the Silverado HD lineup, giving the automaker a wide breadth of off-road capable pickups. 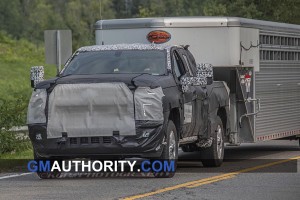 In addition to the raised suspension and suspiciously off-road ready shocks, the large exhaust hints at a 6.6-liter Duramax turbodiesel engine under the hood. Another giveaway that this is an off-road capable pickup is the rear bumper, which TFLTruck.com points out is sculpted around the hitch. This could help give the truck greater ground clearance.

Slowly, we will see more and more of the prototypes as we get closer to the Silverado HD’s scheduled launch. This means more teasers, exposed prototypes, and a reveal at a splashy auto show. Until then, though, we will have to keep scrutinizing every spy photo we see for clues about the new heavy-duty pickup truck.