The 2019 Cadillac XT4 is the luxury brand’s latest product to hit the market, selling 212 units through September. Keep in mind that the launch of the vehicle is just beginning to happen, so we expect numbers to increase sharply when Q4 2018 sales come in. To help drum up excitement for the new model, Cadillac released a new promo that does little to highlight the new product, and is more about celebrity.

Nick Kroll and John Mulaney portray old New Yorkers, reprising their characters from their Broadway show “Oh, Hello,” as Val the Vlogger, played by Awkwafina, drives them around in hopes of getting the underground tour of New York City. 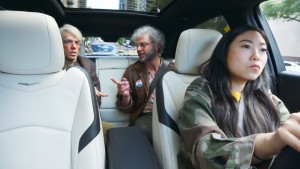 Kroll and Mulaney are great—even if the characters feel a bit cliche. But they easily steal the limelight from the Cadillac XT4. The ad feels like Awkwafina drove the two around who just riffed and improvised a series octo-generic one-liners, and the editor spliced together the best ones to make this commercial.

The commercial also tries to incorporate the “Is that a Buick?” flair where people act suspired that this new vehicle just so happens to be a Buick. The Cadillac ad tries to do the same. After Awkwafina returns to Kroll and Mulaney’s apartment, the two are seen sitting outside as another 2019 Cadillac XT4 drives up. Kroll says, “Now that is a cardiac.” Mulaney says, “You mean a Cadillac?” Kroll says he’s having a heart attack. It’s an interesting play on words, we guess.

Not every commercial will land with everyone, but this one, titled “Now That’s a Cardiac,” feels like an ad you release six months after the crossover hits the market. It would have been the perfect opportunity to lay out the features and amenities of the 2019 Cadillac XT4. Have a look for yourself in the video above, and let us know your thoughts below.