As Chevrolet’s mid-engine Corvette draws closer to its momentous unveiling, likely at the 2019 Detroit Auto Show, yet another prototype has been spied in full camouflage near Germany’s Nürburgring, with the passengers side door open, the hood up, and someone hovering over the engine as the test driver has a chat. Our spy photographer seems to have caught the car just prior to a run around the infamous Nordschleife, as nearby is what appears to be a GM support vehicle, with a couple of stacks of spare wheels and tires on-hand.

Honestly, there isn’t very much we can take away from these photos; we already knew the engine was located back behind the driver there, and mid-engine Corvette prototypes have been popping up in spy photos and video clips taken at the Nürburgring from time immemorial. But hey, it’s our first time seeing the hood up on one of these prototypes, so that’s new.

It appears to be quite a large hood, too. It’s still unknown exactly what the forthcoming mid-engine Corvette will call upon for motivation, but one pervasive rumor from the typically-trustworthy Car and Driver holds that the car will launch with a 500-horsepower version of the 6.2-liter V8 small-block LT1 engine. Eventually, the publication suggests, the car will add 600- and 800-horsepower versions of a high-revving, 5.5-liter DOHC V8, the more potent of which will employ a pair of turbochargers to reach its lofty power goals. 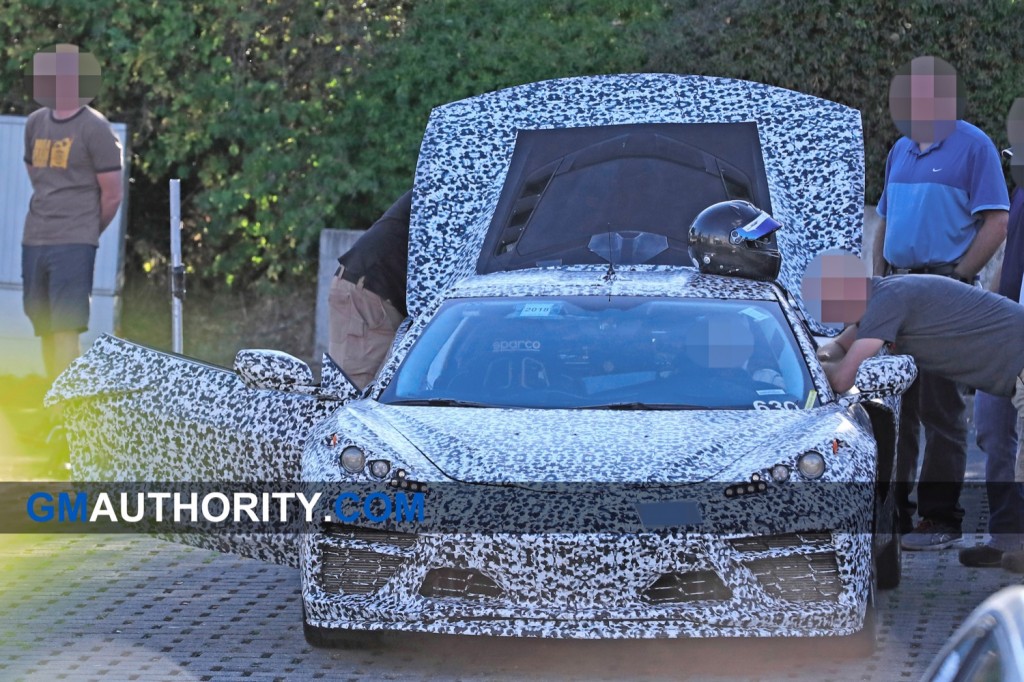 All of that sounds plausible. Granted, extracting 500-or-so horsepower from a sixteen-valve pushrod V8 displacing 6.2 liters, while offering exactly the sort of durability and reliability that GM demands from its road cars, could be a bit of a tall order. So might wringing nearly 110 horsepower-per-liter out of a naturally-aspirated factory 5.5-liter V8, even if it is a high-revving DOHC design. Those numbers are well within the range of what’s physically possible, but, well, there’s a reason racing engines seldom come with a five-year/60k-mile warranty.

Yet GM appears to have a renewed interest in dual-overhead-cam V8 engines, if the new Cadillac 4.2-liter twin-turbo V8 LTA engine (named “Blackwing”) is any indication, and that mill could give GM an architecture to work with in developing the larger DOHC Corvette V8s. If true, the mid-engine Corvette might need about as large a hood as it can get, as DOHC engines tend to be nowhere near as space-efficient as their cam-in-block counterparts. Ever seen an LS next to Ford’s “Coyote” V8?