Heidts Hot Rod & Muscle Car Parts ventured to the 2018 SEMA Show in Las Vegas this week to again show off its PRO-G independent suspension systems. As we’ve reported on before, Heidts makes such independent suspensions for F-body generations of the Chevy Camaro, transforming the pony cars into more competent, well-handled corner carvers.

But it wasn’t the Chevy Camaro that took center stage at the Heidts SEMA both this year. More rather, it was a complete Chevy Tri-Five chassis with independent suspension setups front and rear.

“This is a GM-certified re-pop frame from Woody’s Hot Rodz that features our complete front and rear independent suspension,” Brett Kinsfather, director of sales at Heidts Suspension Systems, told website Chevy Hardcore at the show. “Our stuff is all about being independent. The PRO-G setup was designed for the enthusiast that wants to take their classic car and put it on the track or they are looking for serious street performance.” 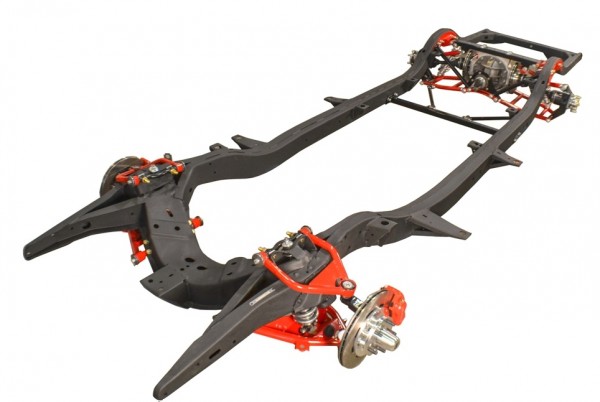 Now, Chevy Tri-Five enthusiasts have the option of buying a complete OE reproduction Woody’s Hot Rodz Tri-Five frame through Heidts, along with all the components needed to have true PRO-G independent suspension front and rear. It won’t be cheap, given that just the bare frame itself starts at $7,999, but it is a great way to replace an old, rusted or warped Chevy Tri-Five frame and make it a proper good-handling car in the process.

Beside the Chevy Tri-Five and third- and fourth-generation Camaros, Heidts also makes independent suspension systems for vehicles like 1955-’59 Chevy pickups, as well as many vintage Ford products. You can check the company out in person at the 2018 SEMA Show in Las Vegas, which runs through Friday, November 2nd.

For all the latest GM SEMA news, stay tuned to GM Authority.