Regular listeners of the Joe Rogan podcast will have notice that there’s no shortage of personalities from different walks of life on his show. From huge names like Elon Musk talking about everything from electric cars to artificial intelligence, pop-culture scientist Neil deGrasse Tyson, to geologist Robert Schoch scientifically arguing how the Sphinx is much older than people think, the podcast has become a cult following for curious minds. The UFC commentator, comedian, martial artist, and bow hunter also likes cars. Aside from Musk, the Joe Rogan podcast has also hosted automotive media stars such as Chris Harris and Matt Farah, as well as ICON founder Jonathan Ward. Most recently, Rogan interviewed retired NASCAR driver Dale Earnhardt Jr.

Dale Jr. started in the Cup Series back in the year 2000, after a couple of seasons running in lower bracket stock car divisions in the mid-to-late 1990’s. Prior to that, he was a mechanic for Dale Earnhardt Sr.’s Chevrolet dealership, and has remained loyal to the Bow Tie Brand since he was a boy. 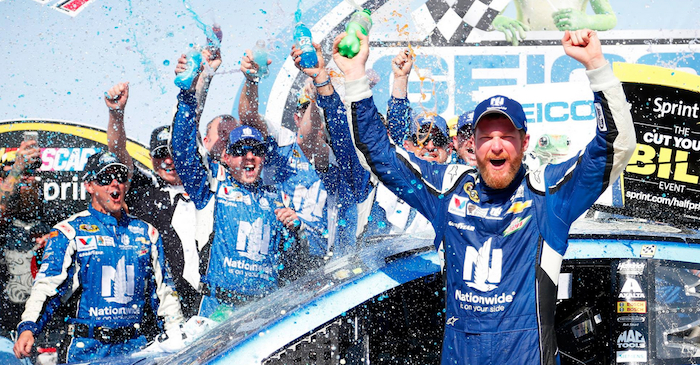 The soft-spoken Dale Jr. goes in detail on the Joe Rogan podcast about his first car, which was a 1980’s Chevrolet S10, some of his projects, such as his recent purchase of a Chevrolet Nomad, and his new daily ride: a 2019 Silverado 1500 pickup truck. It’s not all jovial car talk, however. The NASCAR veteran went into great detail about his frightening issues with concussions – which caused him to retire early. The No. 88 Chevrolet driver’s traumatic experience and road to recovery was bad enough to where he never wanted to deal with it again, and thus, never take the risk of jumping into a race car again. Much of which is detailed in his new book, titled Racing to the Finish: My Story.

But Dale Jr.’s perspective of wanting to live his life eventually took over, and mentions that he sometimes gets in the driver’s seat for an Xfinity Series race or two, just to scratch the itch. He tells Joe Rogan that he’ll continue to do this until he gets bored of it, which might be never. For a full listen, press play on the video of the Joe Rogan podcast above.