Corvette Racing has qualified last in the GTE Pro class for the FIA WEC 6 Hours of Shanghai, with drivers Tommy Milner and Oliver Gavin setting a combined average lap time of 2:00.228.

The No. 64 Corvette C7.R, which will start 11th in its class, was the only GTE Pro entry unable to break the two-minute barrier in the session. The next fastest entry was the No. 71 AF Corse Ferrari 488 of Davide Rigon and Sam Bird, who set an average lap time of 1:59.689 to take 10th position.

The FIA amended its previous Balance of Performance for the one-off American entry prior to qualifying, blaming an error for the accidental 28 kg weight penalty it was handed earlier this week. Despite this, Gavin, Milner and the Corvette Racing crew still seemed to struggle after limited running at the Chinese circuit. 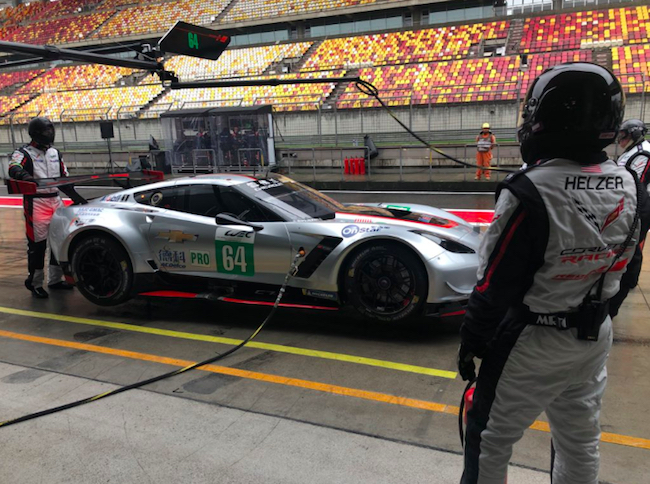 Pole was taken by the No. 66 Ford GT of Stefan Mucke and Olivier Pla, who set an average lap time of 1:58.627. That was enough to edge out the No. 81 BMW M8 GTE of Martin Tomczyk and Nicky Catsburg, who could only muster a 1:58.874 from the big Bimmer. The No. 97 Aston Martin of Maxime Martin and Alex Lynn will start third on the grid after setting an average lap speed of 1:59.00.

The front and midfield of GTE Pro is tight, with Ford, Porsche, Aston Martin and BMW all looking similarly competitive. As is common at Shanghai, rain is predicted for tomorrow, but it’s not yet clear at which point in the race it will come. This will certainly shake up the order, with strategy set to play a crucial role in how the GTE Pro race shakes out.

The green flag for the WEC 6 Hours of Shanghai will wave at at 11 am local time on Sunday, which is 10:00 pm ET or 7:00 pm PST. You can also keep up with live updates from the race through Corvette Racing’s twitter account.