Chase Elliott, the final Chevrolet Camaro driver left in the hunt for the 2018 Sprint Cup Series championship, was knocked out of the NASCAR playoffs following a late-race wreck at ISM Raceway Sunday afternoon.

Trouble began after a restart on Lap 269 of 312, when the No. 41 Ford of Kurt Busch got loose on the exit of Turn 2 and got into the side of Denny Hamlin’s No. 11 Toyota. Unable to regain control, Busch then slid across the track and collected Elliott in the No. 9 car – ending the 22 year-old’s shot at a win, along with his playoff berth.

Elliott had led 16 laps in his No. 9 Chevrolet Camaro and won the first stage of the race, but was penalized for speeding at pit entry on Lap 80. It proved to be a crucial error for the Hendrick Motorsports driver – he likely would have been well clear of the chaos if it hadn’t been for the error.

“You can’t come down pit road leading the race and speed and expect to race for a championship the next week,” he said post-race. “Just unfortunate and especially that late in the race. So, that was just my fault and really no excuse for it. So, we will try again next year.”

The benefactor of the madness was Joe Gibbs Racing’s Kyle Busch. ‘Rowdy’ inherited the lead from Coke Zero 400 winner Erik Jones on Lap 277 and drove home to a trouble-free victory, marking the 51st win of his career. The win gives Busch crucial momentum going into the final race of the season at Miami-Homestead.

“What a day! What a race!” Busch said. “It’s an awesome team and awesome group of guys. Can’t say enough about everybody at Joe Gibbs Racing—all the men and women there that work so hard to prepare such great race cars that I get to drive.” 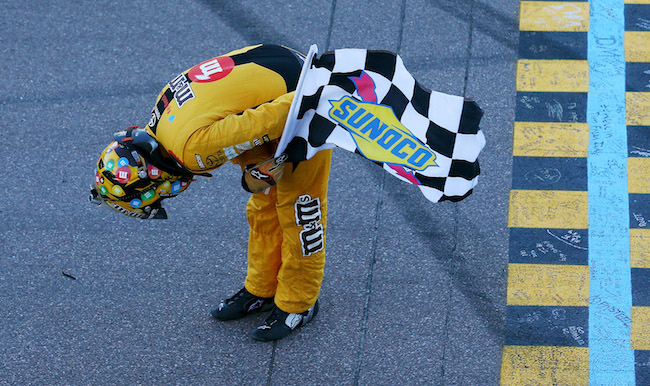 Busch crossed the finish line .501 seconds clear of Brad Keselowski. Kyle Larson chalked up a third-place finish in a Chevrolet Camaro, while Aric Almirola and Kevin Harvick rounded out the top five. Harvick and Busch will join Joey Logano and Martin Truex Jr. in the final four shootout – which will go down at Miami-Homestead Speedway on November 18th at 3:00 pm ET.

A complete video recap of the Can-Am 500 at ISM Speedway can be found below, while full race results can be viewed at this link.