We’re 43 days away from the end of the year, and just weeks away from the countless year-in-review pieces set to flood news feeds as writers kick up their feet to celebrate the holidays. That means we also get a slew of automotive awards and honors handed out, too, with sites selecting their favorite vehicles of the year. Pickuptrucks.com is doing the same, asking, “What’s the best half-ton truck for 2018?” The answer? The 2019 GMC Sierra 1500.

Pickuptrucks.com called the redesigned Sierra 1500 “the quickest, strongest truck in this test, made better by the inclusion of some novel new technology.” The site gave nods to the truck’s 6.2-liter V8 engine and the transmission gearing of the 10-speed gearbox. The Sierra also came out on top in braking performance when loaded to its max payload. 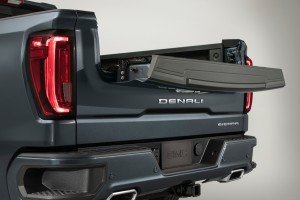 But it wasn’t all praise. The site did have some issues with the 2019 GMC Sierra 1500. The site criticized the Sierra’s interior as being nearly identical to the one found in the cheaper Chevy Silverado 1500. While the two have different exteriors, the site said it would have liked to see some differentiation inside, too. Another hangup was outward visibility.

The Sierra beat out four other competitors for the Pickuptrucks.com’s top honors. The Nissan Titan Pro-4X placed fifth, the 2019 Chevy Silverado 1500 High Country came in fourth, followed by the Ram 1500 Limited in third, and the 2018 Ford F-150 Lariat in second.

While the judges did pick the Ram 1500 as their favorite, the empirical test numbers tipped the scales in the Sierra’s favor. The stellar powertrain, bold, luxurious styling, and innovative MultiPro tailgate helped the Sierra stand out from its competitors.