GM stock jumped as much as 7 percent in premarket trading on Tuesday on news that the automaker had struck a new partnership with Honda to develop autonomous vehicle technology and to bring self-driving cars to market as part of its Cruise Automation division.

In fact, GM was trading as high as $35.05 at 9:30 am. But the newfound collaboration wasn’t enough to sustain a day-long rally for the Detroit-based automaker. By mid-morning, GM stock was up less than 2 percent.

By comparison, Honda’s U.S. shares were down more than 3 percent in trading Wednesday. 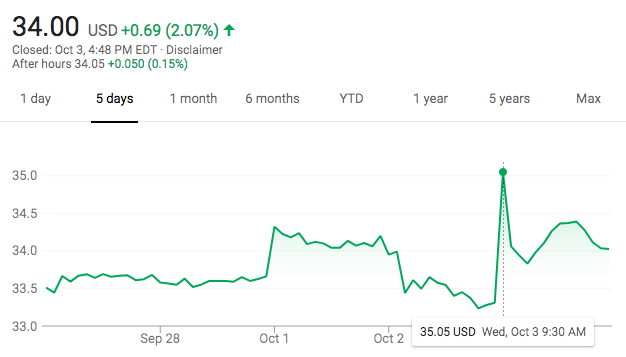 GM shares are down more than 21 percent over the past year. In fact, they hit a new 52-week low during trading on Tuesday, October 2nd.

But despite today’s rally, GM shares continue to trade only four points higher than the $33 per share level that the “New GM held its Initial Public Offering (IPO) in November 2010. The automaker has been doing a significant amount to increase its share price, exiting unprofitable markets, divesting loss-making divisions, making adjustments to its business model in order to prioritize profit over market share, while investing heavily into new-age mobility ventures such as electric and autonomous vehicle technologies.