The 2018 SEMA Show is in full swing at the Las Vegas Convention Center, and there’s something peculiar we want to point out: every single 2019 Camaro SS at the Chevrolet display has what’s been officially called a “concept” fascia design. The original look that debuted in springtime of this year is apparently nowhere to be found, save for a couple of tuning companies who got their hands on early builds.

This is important because we have received word that GM is working on getting this revised fascia design to market as soon as possible. The fact that there are no 2019 Camaro SS models on display with the original fascia further galvanizes what we’ve heard. Even the new 2019 COPO Camaro and eCOPO Camaro Concept feature the emergency refreshed look.

Chevrolet could be doing a combination of things at SEMA when it comes to the 2019 Camaro SS refresh. The gesture could be taken as an outright admission that the original design has been received negatively by customers, and are hoping to regain favor with this update. Or Chevrolet could simply be looking to gauge interest in this “concept” front clip, while keeping the original design at home. 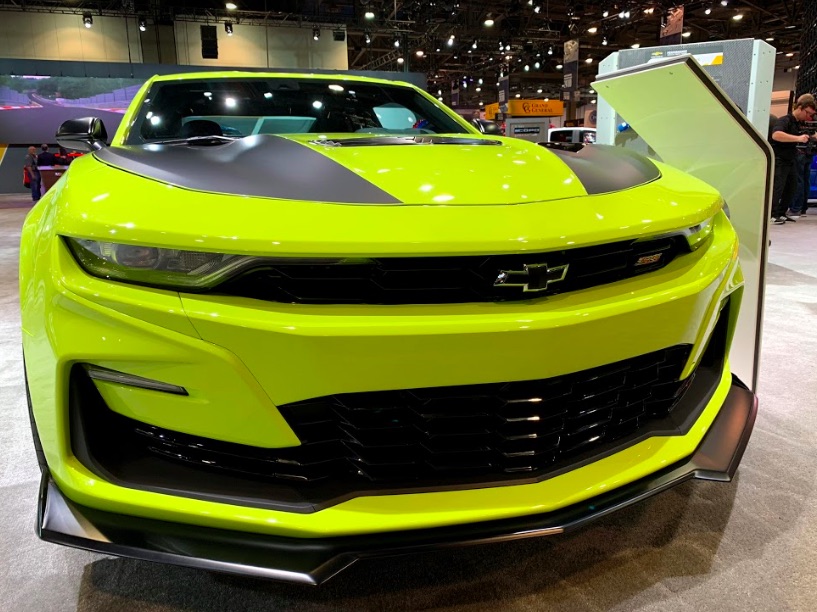 The Camaro is currently Chevrolet’s most affordable sports car, slotting below the Chevrolet Corvette. The current model was introduced for the 2016 model year and represents the sixth generation of the Camaro nameplate. The model rides on the GM Alpha platform shared with the Cadillac ATS and Cadillac CTS, though the majority of the architecture underpinning the Camaro are unique to it.

The 2018 Chevy Camaro represents the third model year of the sixth-gen Camaro that deleted the Camaro 50th Anniversary Edition and the Krypton Green exterior color, while adding the ZL1 1LE Extreme Track Performance Package. There’s also an expanded availability of the SS 1LE Track Performance Package, which is now available on the 2SS Coupe, as well as the addition of a washer fluid level sensor.