GM has filed an application to register “Chevrolet FNR” and “FNR” as trademarks with the United States Patent and Trademark Office (USPTO), GM Authority has discovered. 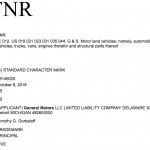 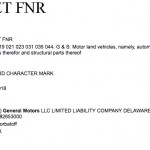 FNR is an acronym for Find New Roads – Chevrolet’s slogan since 2013. The brand has used the FNR moniker twice before on two Chevrolet concept cars, both of which were developed by its Chinese joint venture development center – the Pan Asian Technical Automotive Center (PATAC).

The first was the Chevrolet FNR concept – a highly-futuristic show car that made its debut at the 2015 Shanghai Auto Show. The autonomous electric concept vehicle and/or its various elements have yet to surface in any production Chevrolet model. The second was the FNR-X concept, a futuristic-looking crossover that’s significantly more production-ready than the former. Having made its debut at the 2017 Auto Shanghai, the FNR-X was a preview of the styling introduced on Chevy’s 2019 Blazer crossover and the new 2019 Chevy Orlando people mover. We’re curious to discover the purpose behind filing to secure “FNR” as a trademark, and especially if the filings foreshadow a future Chevy model or concept. Stay tuned to GM Authority as we dig into what GM has planned for this trademark filing, as well as for ongoing GM news and Chevy news coverage.