The IMSA SportsCar Championship driving team of Oliver Gavin and Tommy Milner is packing up and heading to Shanghai next month for the Six Hours of Shanghai – the fifth round in the 2018-’19 FIA World Endurance Championship superseason. The Chinese race marks the final event on the WEC calendar for 2018, before the action resumes in March, 2019 with the 1,000 Miles of Sebring. 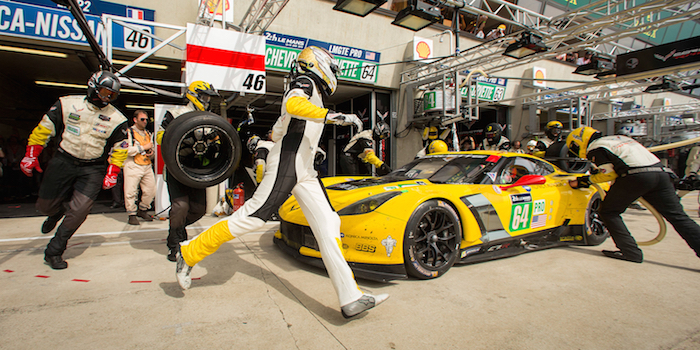 Corvette Racing isn’t contending the full 2018-’19 FIA World Endurance Championship season, but the factory racing outfit is happy to fit one or two events into its busy schedule when possible, such as the 24 Hours of Le Mans. Driving the No. 64 Chevrolet Corvette C7.R, Gavin and Milner failed to finish this year’s Le Mans race after their car succumbed to mechanical difficulties, first from the suspension, and later, from the engine. Their teammates Magnussen and Garcia took fourth in the GTE-Pro class, behind two Porsches and a Ford.

According to Sportscar365, which reported on Corvette Racing’s decision to run at this year’s Six Hours of Shanghai, the race will serve as the team’s Asian debut, and they’ll be marking the occasion with a special “Redline” livery to promote the Redline model series sold in China and elsewhere.

Next year’s IMSA WeatherTech SportsCar Championship season will get underway next January with the 24 Hours of Daytona, and you can bet that Corvette Racing will be back at it again, likely with a car – and more than likely, a driver lineup – much the same as the current one.

Check in with GM Authority regularly for all the latest Corvette Racing news.