Corvette Racing has its eye on victory as the team heads to Road Atlanta this weekend for the final round in the 2018 IMSA WeatherTech SportsCar Championship: the ten-hour Motul Petit Le Mans. Drivers Antonio Garcia and Jan Magnussen, who split time in the cockpit of the No. 3 Chevrolet Corvette C7.R, currently lead in the Drivers’ Championship standings by nine points. They’ll have to place fourth or better at the Petit Le Mans if they want to clinch the championship.

Garcia and Magnussen are the reigning champs in the IMSA SportsCar Championship’s GTLM class, having taken the Drivers’ title in the 2017 season. The duo haven’t quite managed to win a single race this season, although they’ve consistently placed well in the championship.

Chevrolet might also have a shot at taking the Manufacturers’ title at the 2018 Motul Petit Le Mans, although the advantage there goes to Ford; buoyed by the Ford GT’s numerous class wins this season, Ford currently has a ten-point lead over Chevrolet in the Manufacturers’ standings. 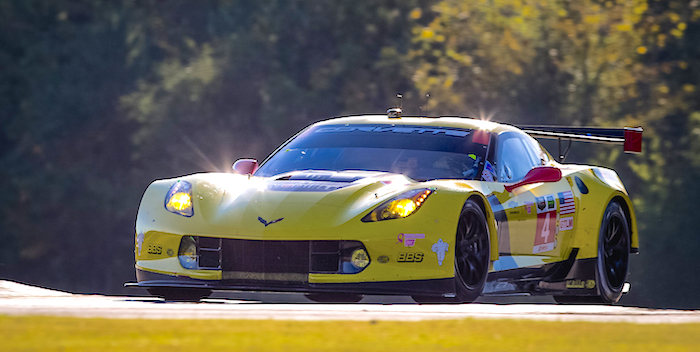 At the Petit Le Mans at Road Atlanta, both Corvette Racing teams – the No. 3 duo of Garcia and Magnussen, and the No. 4 team of Oliver Gavin and Tommy Milner – will be joined by Marcel Fässler. The grueling nature of the ten-hour race necessitates a third driver for each car, and Corvette Racing has elected to deploy the same extra driver in both cars.

At Long Beach this year, Gavin and Milner secured Corvette Racing’s only class victory of the 2018 season, although the duo is currently ranked fifth in the Drivers’ standings, all but precluding them from nabbing the Drivers’ Championship.

Should Garcia and Magnussen succeed in taking home the title, they’ll earn Corvette Racing its third consecutive Drivers’ and Teams’ Championships, as Gavin and Milner nabbed the titles back in 2016. With that, Corvette Racing would have a total of 13 Teams’ titles and 12 Drivers’ titles from the program’s 20 years of competition.