You’d think an Acura Integra and a 1970s-era Cadillac Eldorado would be opposites—water and oil. But with enough gumption, resources, time, and money, blending the two isn’t impossible. However, it does create an odd amalgamation. There’s a listing for such a creation at ClassicCars.com with an asking price of just $27,995. It could be yours, if you dare.

From the outside, the Integra looks like a sleeper. However, upon closer inspection, you can see the widebody kit that hides the car’s real purpose. Underneath the Acura sheet metal is a host of upgrades that were necessary to get the large 8.2-liter Cadillac Eldorado V8 inside because the engine isn’t under the hood. The addition of the 500-cubic-inch V8 makes the Acura a mid-engined vehicle with nothing separating the passenger compartment from the massive engine. 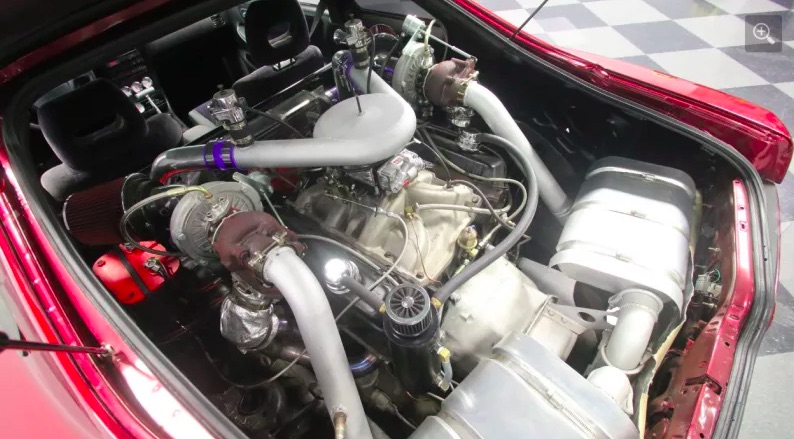 But the owner did more than cram a massive engine in the compact Japanese sports car. The Cadillac Eldorado engine has a host of modifications that include two turbos, a pair of intercoolers, and a 950 CFM carburetor. Gone is the Integra’s wishbone rear suspension. To fit the engine, the entire front Cadillac Eldorado subframe was welded into the vehicle, which also means the classic Cadillac transaxle is here, too.

The whole creation is more of a novelty than something you could drive on a daily basis. Jalopnik writer David Tracy called the sales manager of Streetside Classics who said the car drives “horrendously.” The manager added, “We got it up to 40, and personally I didn’t have the balls to take it any higher.”

The creation doesn’t handle well, and without a firewall separating the driver from the powertrain, heat and noise prevent a pleasant driving experience. None of this is surprising. With a large twin-turbocharged V8 engine inches from one’s head, what would you expect? It’s more of a show car than a daily driver.