With the launch of an all-new generation of models for 2020, the Chevrolet Tahoe and its long-wheelbase sibling, the Suburban, will be getting an independent rear suspension for the first time. Prototypes rocking the new rear suspension design have been spied testing publicly on several occasions now, and while General Motors at first took pains to camouflage the suspension, the automaker has been less guarded with subsequent prototypes.

Now, we’ve gotten our best look yet at the rear suspension design of the 2020 Tahoe and Suburban, courtesy of a prototype Tahoe spied earlier in the month. As you can clearly see in the images above and below, there is no solid, live axle spanning between the rear hubs. Instead, there’s a beefy, black suspension arm visible, tying each hub to a central subframe, and presumably, somewhere out of sight, a pair of constant-velocity halfshafts carrying torque from the rear differential to the wheels. 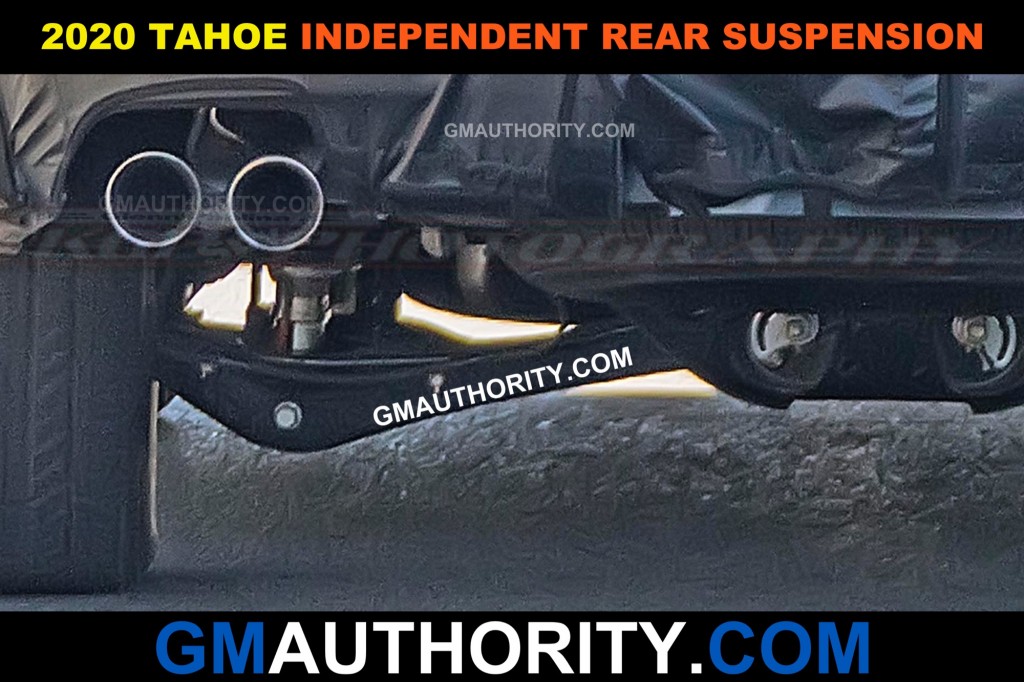 Why Do We Care?

That the 2020 Tahoe and Suburban are to feature an independent rear suspension instead of the usual live axle is significant, with likely implications for both comfort and performance. IRS setups tend to offer greater handling and stability than solid-axle designs, along with a smoother ride over rough driving surfaces.

Yet solid axles are often the favorite among those who find themselves towing or hauling heavy loads with any regularity, thanks primarily to their durability. They’re also popular among off-road enthusiasts, owing to their strength, serviceability, and articulation over difficult terrain.

By switching from a solid rear axle to an independent rear suspension on the all-new, 2020 Tahoe and Suburban, General Motors is essentially attempting to strike a new balance between on-road manners and hauling/off-roading abilities – one that’s a bit nearer the former ideal than in past iterations. It might also be taken as a bit of vindication for Ford Motor Company, whose full-size Expedition SUV has used an independent rear suspension since its second generation launched for 2003.