Here’s our first look at the upcoming 2020 GMC Yukon. We’re looking at the regular-wheelbase version, though an extended-length Yukon XL will also be available.

Like its corporate cousins – the Chevy Tahoe/Suburban and Cadillac Escalade – the Yukon will be completely overhauled (redesigned and re-engineered) for the 2020 model year. And though the tester seen here is covered in a significant amount of padded camouflage, we can still see several noteworthy elements.

This 2020 GMC Yukon prototype also features a large and upright grille, much like the one found on the 2019 Sierra. Notably, the grille on this model doesn’t have the crossbar design element that we’ve previously seen on the Tahoe/Suburban. 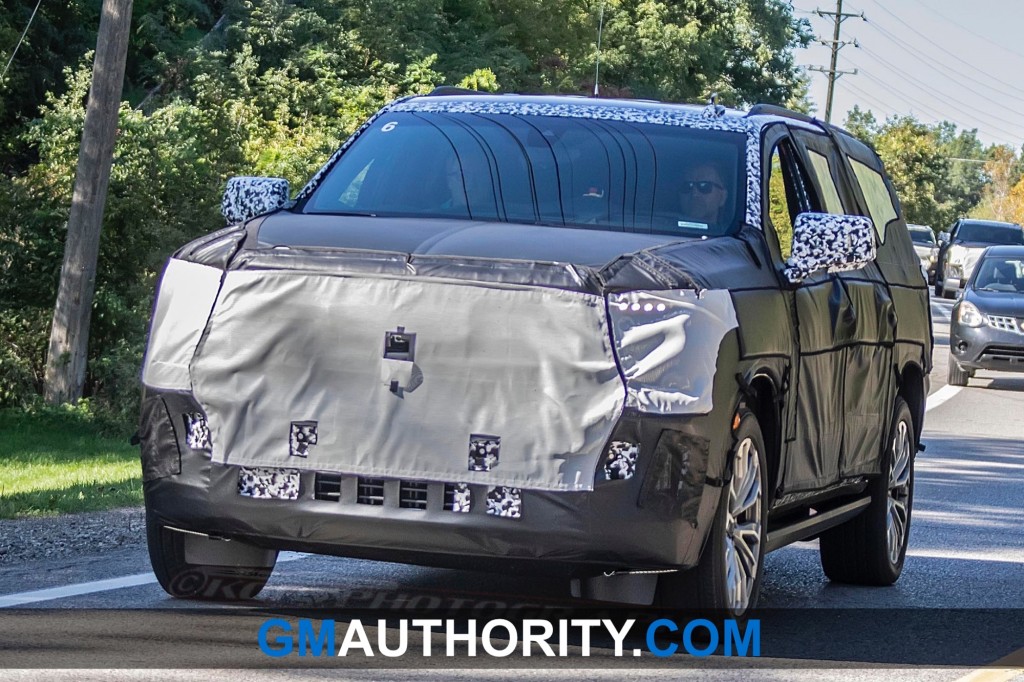 At the front, the prototype appears to be wearing placeholder lights rather than production units. A closer look at the camo reveals that there is space reserved for a rather large production headlight cluster that will likely accommodate GMC’s signature C-shaped lighting elements. 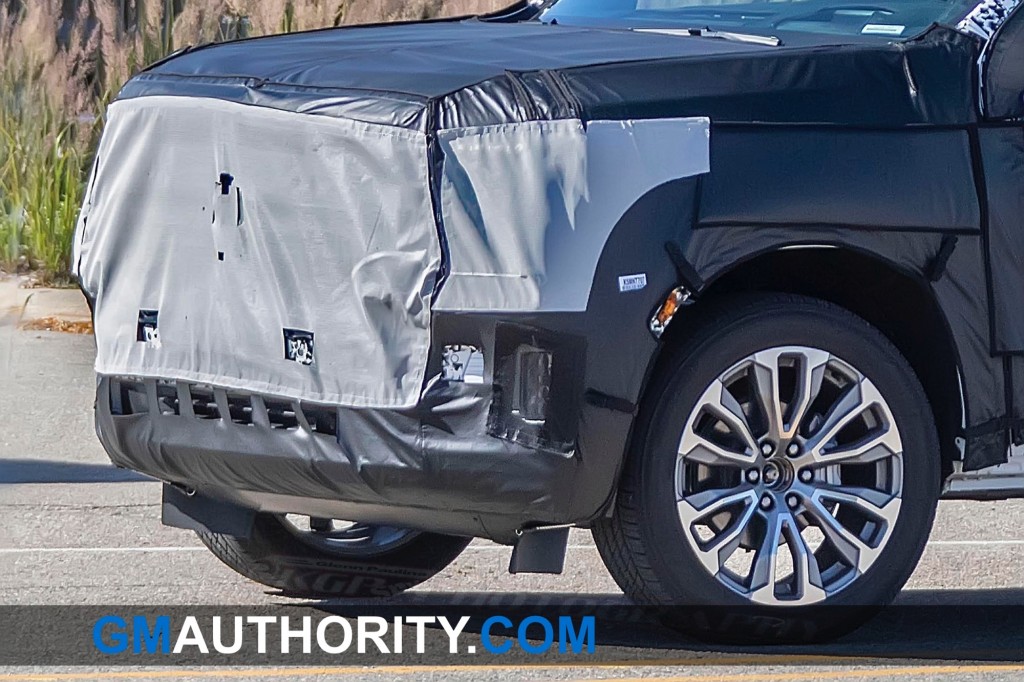 At the lower end of the front fascia is a set of vertical LED accent lights that are very similar to the units in the 2019 Sierra 1500.

Also notice the pedestal-style mirrors mounted on the doors, rather than at the A-pillar junction – another characteristic similar to the Sierra.

The side profile reveals a very upright and boxy shape that we would describe as having a muscular and authoritative presence. The 2020 GMC Yukon tester rides on large dual-six-spoke wheels that appear to be 20 inches in size. 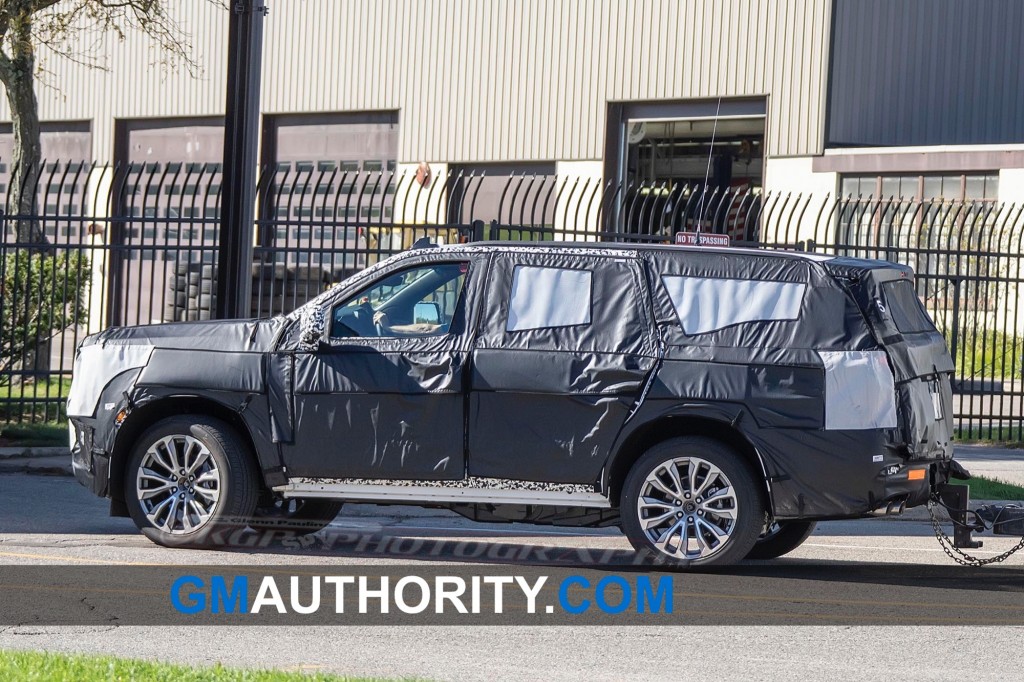 This prototype is towing a trailer, which prevented us from getting clear shots of the rear. Even so, We can see a rather upright rear end with dual exhaust tips – which confirm our previous report of GM paying particular attention to detail on its new full-size SUVs.

The new 2020 GMC Yukon will represent the fifth-generation of the Yukon nameplate. The vehicle will ride on a version of the new GM T1 platform that will also underpin the 2020 Tahoe, 2020 Suburban and 2020 Escalade. The platform currently underpins Chevy’s 2019 Silverado and GMC’s 2019 Sierra.

Weight is expected to be reduced significantly as a result of aluminum swing panels (on the doors, hood, liftgate). GM employed the same approach on the new Silverado and Sierra and saw curb weight decrease by as much as 300 pounds.

One of the biggest improvements to the new model over the current Yukon, which rides on the K2 platform, is the introduction of an independent rear suspension (IRS), which some believe is in response to Ford offering an independent rear on its Expedition.

We expect the standard engine in the 2020 GMC Yukon to be one of the following two motors:

If one of the two aforementioned motors is standard, then the other could be offered as an option. Meanwhile, the up-level engine for the 2020 Yukon Denali will be the naturally-aspirated 6.2 V8 L87 gasoline engine good for 420 horsepower and 460 pound-feet of torque mated to the new GM 10-speed automatic transmission. Like its less potent 5.3L brother, the L87 also features Dynamic Fuel Management.

Outside of the vital mechanical elements, expect the future GMC Yukon to introduce greater levels of differentiation from its corporate cousins from Chevrolet and Cadillac, while introducing greater levels of comfort, luxury, and refinement than the current model.

Two body styles will continue being offered: the regular-length Yukon and extended-length Yukon XL. Besides the range-topping Yukon Denali trim level, the 2020 GMC Yukon will likely also introduce several new sub-models – such as Elevation and AT4 – that follow the model range of the new Sierra.

Expect GMC to unveil the new Yukon in the next few months and launch it in the first half of the 2019 calendar year as a 2020 model.