Last weekend’s Continental Tire Monterey Grand Prix at WeatherTech Raceway Laguna Seca was an excruciating experience for the No. 5 Mustang Sampling Cadillac DPi-V.R team, as the car crashed out hard before the green flag even had a chance to drop. João Barbosa was at the wheel, soon to cross the start line, when the No. 99 JDC-Miller Motorsports Oreca LMP2 impacted the rear corner of the car, sending it spinning into the middle of the track. The No. 5 Cadillac was soon after hit by the No. 66 Ford GT (GTLM), and finally, the No. 911 Porsche 911 (GTLM).

The Mustang Sampling Cadillac DPi-V.R was damaged badly enough that it wasn’t able to even start the race, earning no points for last weekend’s round of the IMSA WeatherTech SportsCar Championship.

The race was nearly just as painful for the No. 10 Konica-Minolta Cadillac DPi-V.R of Wayne Taylor Racing, which retired from the race after 18 laps due to a mechanical issue. The car had started from pole position. 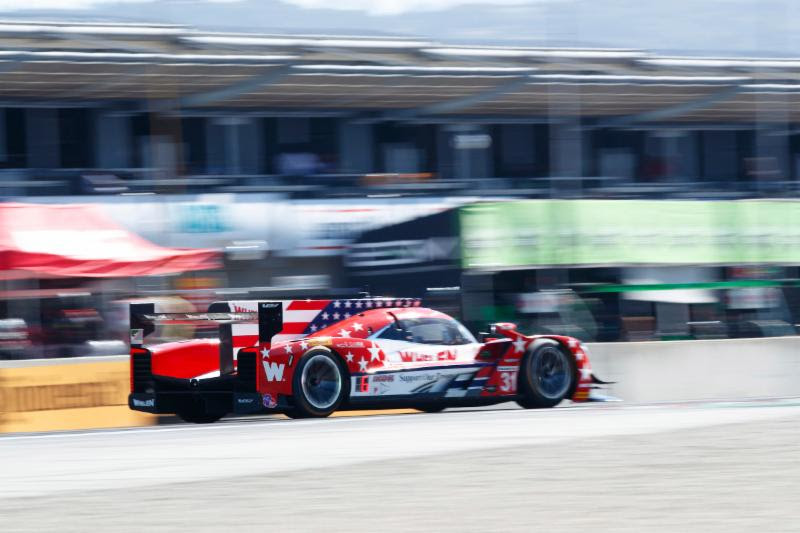 All this left the No. 31 Whelen Engineering Cadillac DPi-V.R the sole Cadillac in the race. The team had had difficulty all through practice in getting the car’s handling dialed-in, starting from seventh after a lukewarm showing in Qualifying, and the best that drivers Eric Curran and Felipe Nasr were able to muster was a fifth-place finish. With that, the team earned some valuable points to keep them in the championship running as the 2018 IMSA WeatherTech SportsCar Championship moves into its final round.

“It seemed they all started going, and then they checked up,” João Barbosa said of the start. “I checked up, and I felt a big hit in the rear, and I got spun around. Then I saw the GT traffic coming at me, and I just braced myself. It was a big hit, but the Cadillac is an amazing car, a strong car.

“I’m sorry for all the Action Express Mustang Sampling guys. They worked all weekend to get the car ready. We had a really good shot today. The car was really good on race pace. Unfortunately, we [were] out of the race, and the championship gets that much tougher now. We’re very disappointed.”