Did you know that 100 pecent of the people currently in GMAuthority‘s employ reside within the United States?

It’s true, and while as journalists we recognize the varied achievements of automakers from the world over, as Americans, we take particular pride in the feats of our own domestic automotive manufacturers. So, we were especially delighted when our spy photographer camped out at Germany’s world-famous Nürburgring Nordschleife produced a few images of the forthcoming mid-engine Corvette (C8) rocking the old red-white-and-blue on its derrière, if you’ll pardon our French.

As shown in these photos, the mid-engine Corvette C8 prototype proudly wore a “U.S.A.” bumper sticker with an American flag pattern as it drove around the distinguished European road course, representing its home country while on the old continent. There is perhaps something a bit funny about it wearing any sort of identifying feature while it’s all covered up in obfuscating camouflage, but we’re too darn proud to laugh. 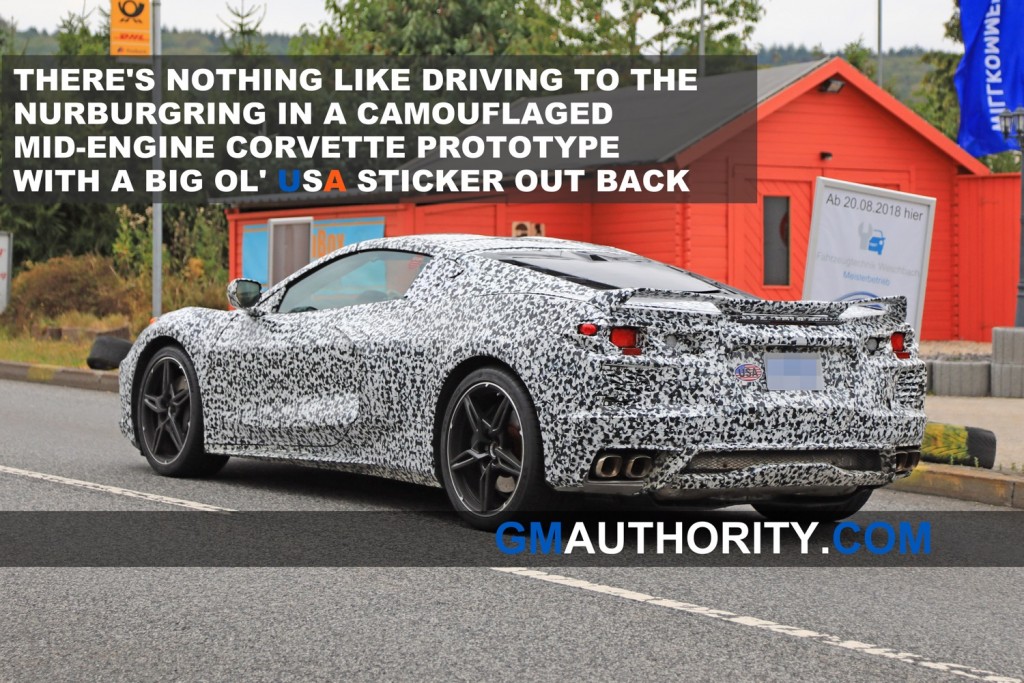 Making us all the more proud as GM fans is that the forthcoming mid-engine Corvette is nearly ready to join a small, elite class of rear-mid-engine American production cars. While it’s a layout that’s long been embraced by several boutique European carmakers, America’s volume automakers have never been quite as keen to install the powerplant just ahead of the rear axle, although the Pontiac Fiero and Ford GT (and earlier GT40) are notable exceptions. The Chevrolet Corvair and DeLorean DMC-12 utilized a rear-engine layout, where most of the engine sat behind the rear axle, while AMC’s AMX/3 never quite made it to production.

Why move to a rear-mid-engine layout? It’s all about the distribution of weight between the axles. Putting mass at the rear of the vehicle helps keep the driven wheels glued for maximum acceleration, and under braking, much of the weight shifts forward anyway, helping the front tires slow the car and exercise strong cornering grip. Now, today’s Chevrolet Corvette – the C7 – already has a slightly rear-biased weight distribution, thanks to a front-mid-engine layout and a rear-mounted transaxle, but even more bias is never a bad thing.

The new layout should help the forthcoming mid-engine Corvette / Corvette C8 compete with the very best of them. It’s a good time to be an American.