The value of GM stock fell 5.8 percent during the week of September 3rd, 2018 on rumors that the automaker’s sales declined 13 percent in August.

General Motors shares opened on Tuesday, September 4th (the day after the long Labor Day weekend) on the New York Stock Exchange (NYSE) at $36 per share and closed on Friday, September 7th at $33.91 per share.

Starting in April, General Motors decided to report sales figures on a quarterly basis, ending the decades-long practice of sharing sales results every month. Due to the new practice, GM refused to confirm or deny the rumored August sales results, which were originally reported by Bloomberg News on information from two sources. The automaker did, however, confirm that it reduced discounts during the month and saw Average Transaction Prices (ATPs) increase by $915 on an annual basis.

GM is expected to release sales figures for the third quarter of 2018 in the the first few days of October. The sales results will include figures for July, August and September – but the figures will not be broken out by month.

Consequently, it would appear that GM’s experiment of switching to quarterly sales reporting sales has backfired, at least for the time being.

One of the biggest things worrying investors is an alleged 23 percent drop in Silverado sales in August. The figure was leaked on Tuesday by sources speaking to Bloomberg News on the basis of anonymity.

However, the validity of the numbers was called into question by several GM Authority readers in the comments section, who claim to have seen the data. 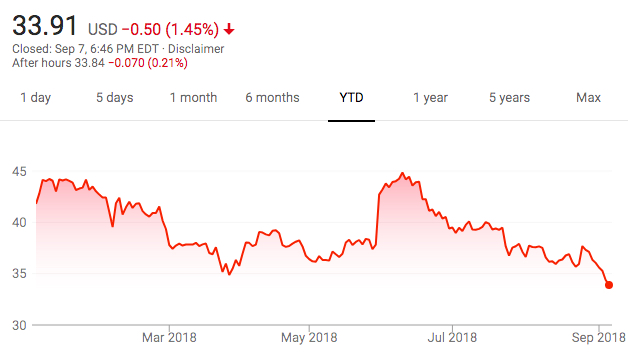 The 5.8 percent drop during the week of September 3rd is the latest in a long-running erosion of GM stock prices. The automaker started the year trading at a rather decent $41.24, but the current $33.91 share price represents a not-insignificant 17.7 percent decline.

The single biggest blow to GM’s stock price in the history of the “new GM” came following Q2 earnings, where the automaker revealed that higher commodity prices will sap roughly $1 billion USD in profit from its 2018 fiscal year.

We’re sure that the ongoing NAFTA negotiations aren’t helping the stock’s value, as uncertainty associated with new deal persists. President Trump has threatened to levy tariffs on vehicles made in Canada if the U.S.’ northern neighbor doesn’t agree to the terms of the new deal reached with Mexico.