Ford Motor Company made waves in 2015 when they introduced the Mustang GT350 with a 5.2-liter flat-plane crank V8 under the hood. Unlike the majority of American V8s, which have historically contained a cross-plane setup, Ford took a page from the Italians’ book on how to make big power. By utilizing a 180 degree flat-plane crank, an engine is able to breathe significantly better, and in turn produce more horsepower. The other key side effect of using a flat-planer? Lots of revs. The Voodoo motor screams all the way to 8,250 RPM before reaching fuel cut-off, significantly higher than the 7,000+ RPM redline of the 5.0-liter Coyote V8 on which the Voodoo motor is based.

You may be asking yourself why more American companies haven’t used flat-plane crankshafts, considering they are so beneficial to performance. Thankfully for the rest of us, this C6 Corvette Z06 owner decided to find out for himself what a flat-plane crank LS7 would be like. The answer? Quite different than a cross-plane motor. 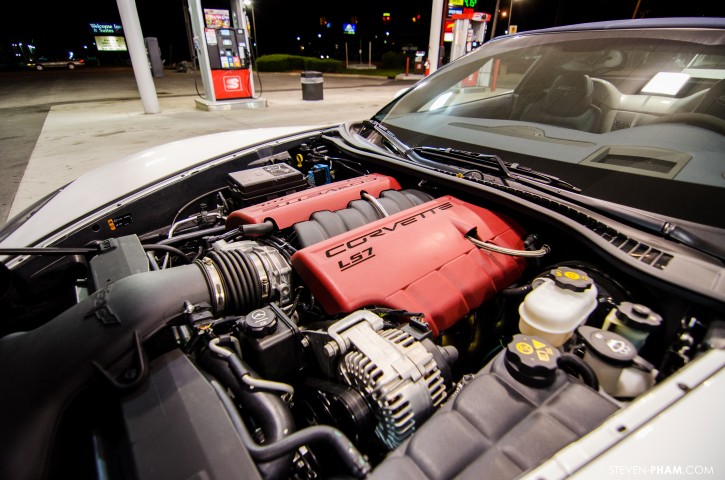 The stock LS7 is a 7.0-liter variant of General Motors’ fourth generation small-block V8. Built by hand in Wixom, Michigan, the LS7 has a reputation for being a bit of a monster that was only found in the C6 Corvette Z06, 427 Convertible, and fifth-generation Camaro Z/28. When looking at the numbers this engine produces, that reputation comes as no surprise: 505 horsepower at 6,100 RPM and 470 pound-feet of torque at 4,800 RPM are stout figures. Rip out that factory supplied cross-plane crank and stuff in a new flat-plane unit, and those numbers are surely going to be even more impressive.

The change in firing order, as necessitated by switching to a flat-plane crank, results in a new soundtrack for the LS7 in the Corvette Z06 as well. Gone is the traditional American muscle howl, replaced by a more exotic sounding exhaust note. The rev limiter has seemingly increased as well, however the owner hasn’t made that information available. Upon finishing the short clip, we had only two questions: how much does this cost? And with this around, who needs a Voodoo?