For ride and handling impressions on the 2019 Cadillac XT4, click here.

Arguably more important than the way a premium car drives is the way it cocoons and comforts you from the outside world. A desirable little mobile fortress that somebody can call their own, and lay claim as master of their own domain. Everything needs to feel fortified, yet serene, and stylish. And it’s no small order to be the best at all of these things in the small luxury crossover market, though Cadillac has finally arrived with the XT4 as the latest contender.

All Cadillac XT4 during the launch drive event in Seattle were fully loaded Sport or Premium Luxury models, tipping the scales at roughly $20,000 over the base $36k MSRP. Does the interior appear $20,000 nicer? It’s hard to say, considering not having a base 2019 Cadillac XT4 available. Nevertheless, the interior is well put together, rather charming, and represents the most modern interpretation of the Cadillac design language thus far.

About the price. The 2019 Cadillac XT4 MSRP jumps significantly thanks to no shortage of optional equipment, even beyond the base model. Options like the $2,450 Comfort and Convenience Package, the $1,500 Enhanced Visibility Package, a $1,400 Technology Package, an $1,100 Driver Assist Package, and an oddly separate $770 Driver Awareness Package.  Further add-ons include a $1,500 navigation package that also adds a 13-speaker Bose Centerpoint audio system, and the panoramic sunroof is $1,700.

Visibility from the drivers seat bears no complaints, really. The rakish roofline may seem give way to the illusion that the belt line is too high, or that the A-pillars are too swept back, but really we never felt claustrophobic, nor short of sight. The myriad of sensors from the various packages also gives aid to drivers that may need it. The backup camera, which is available in a 360-degree overhead surround view now lines the anticipated wheel turning radius, so as to preemptively make the perfect input. The XT4 can’t park itself (yet), but with all of the visual low speed aids, there’s nobody that can’t correctly park this sporty crossover. 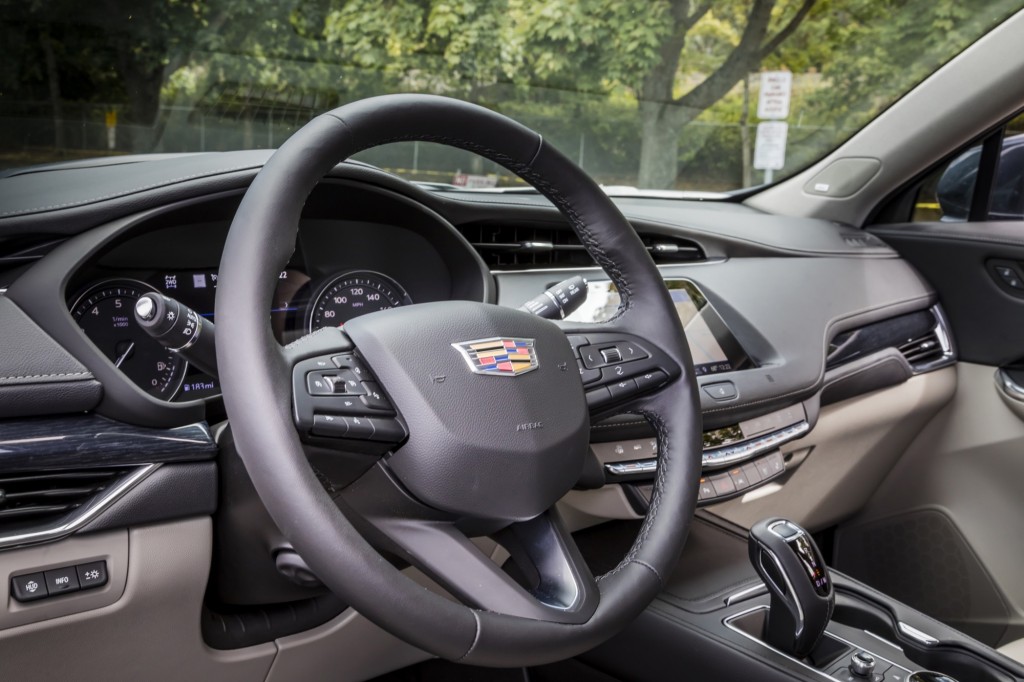 Some of the lowlights, however, are as follows. It would have been nice to see the plastic material switches and buttons nicely spread  throughout the 2019 Cadillac XT4 be swapped out with a more premium material – be it metal, carbon fiber, or wood. It would have been a serious eye opener for the segment, and a crucial detail that lets everybody know that Cadillac is serious about luxury. Perhaps we’ll see this manifest itself on a future Cadillac XT4 Platinum. The electronic shifter also seemed unintuitive. Reverse gear requires a forward selecting motion, which felt odd when the vehicle is about to go backwards. And the steering wheel felt annoyingly cheap. Be it either the feel of the leather wrap-around, or what feels to be a hollow construction, it’s far from the nicest thing in the cabin, yet is the one thing that the consumer will always be touching.

The highlights. Many people probably didn’t catch it – but there are available massaging front seats, which are part of the Comfort and Convenience Package. The controls are a bit cumbersome for a first impression, but anybody who commits to an XT4 will likely get the hang of it over a small amount of time. All of the touch points are perfectly soft, as well. Additionally, the new infotainment system is also lightning quick – and makes us easily forget the resentful CUE system of previous Cadillac products. And no longer are all of the controls confined to a touch screen, and now there’s a convenient rotary dial to help navigate the screen without having to touch it. Seriously – this system is sharp (though it better be, for the money). As a bonus, the 2019 Cadillac XT4 features NFC technology, which you can read more about here.

The next-generation camera mirror (part of the Enhanced Visibility Package) is also more crisp than before, and is far better in the low light scenarios. But we still find our eyes wandering to the traditional way with the flip of a toggle. To which, the mirror is of a sexy and frameless design, that also mimics the shape of the Cadillac crest. And thanks to the wide stance of the XT4 (and the utilization of a midsize vehicle architecture, derived from the E2xx platform), the cabin gives off an unrivaled spaciousness compared to similarly priced vehicles such as the BMW X1 and Mercedes-Benz GLA. Even compared to the Lexus NX, its most direct rival in terms of proportions and pricing, the 2019 Cadillac XT4 offers more headroom, more hip room, and far more rear legroom. And the sunroof is simply a must. Did we mention the cabin air ionizer? Did we mention the Heads Up Display? Did we mention the wireless phone charger? The ventilated seats?

Perhaps the $20,000 of additional content is reasonable, after all.