We’ve already shown you photos of the 2019 Blazer in the studio and in the wild not once, not twice, but thrice. And most recently, we caught up to another prototype of Chevy’s new midsize crossover SUV and got some more detailed shots of the vehicle in the wild.

Specifically, the model seen here is the LT trim level coated in the eye-catching Red Hot exterior color. Though it might look it, this is not the Blazer RS – which features even an more aggressive and distinctive appearance. 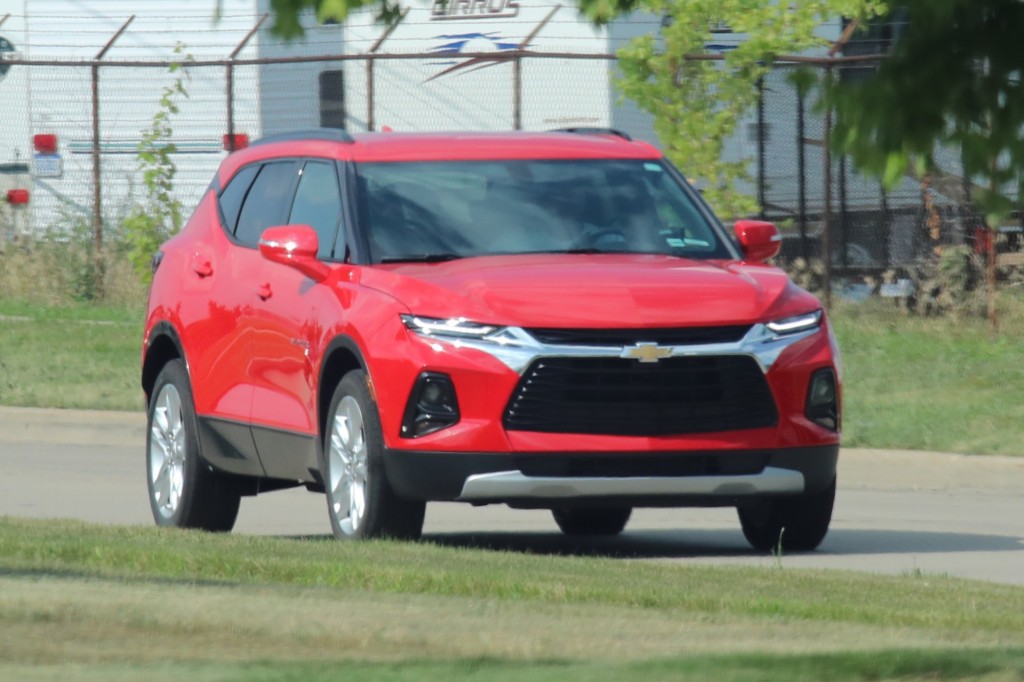 The front end features the most aggressive fascia we’ve ever seen on a Chevrolet crossover. Standard on all 2019 Blazer models, the dual-element lighting setup is comprised of narrow LED daytime running lights located at the top row along with primary HID lights sitting a level below them. From what we’ve seen, the setup does an excellent job in the lighting department.

An aggressive black grille sits up front, with a bright chrome piece joining the left and right lights, thereby introducing the newest iteration of Chevy’s famous dual-port grille. The red hot Blazer also features a silver/chrome accent in the lower facia, which we believe is unique to the LT trim, as it differs for other models such as the lower LS and higher-end RS and Premier.

One of our most favorite styling elements on this model is the black A-pillar, and the way it interacts with the sections above and below it.

The side mirrors are installed using a pedestal-style mount on the belt line, with the configuration resulting in a small vanity window fore of the primary front windows. The exterior of the mirrors feature built-in turn signal indicators. 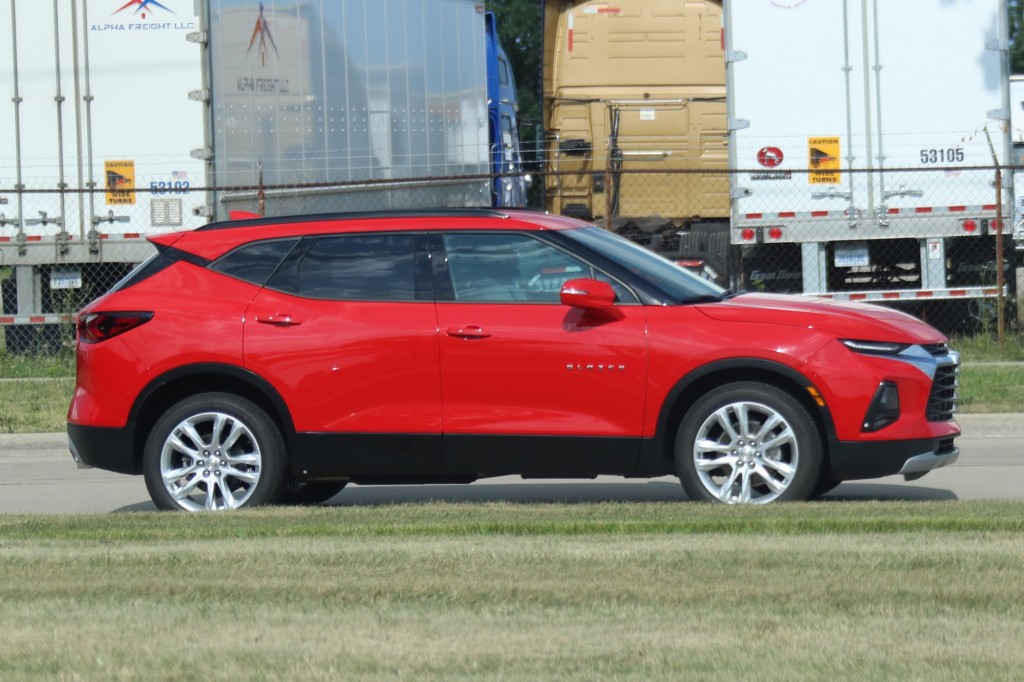 Like the front end, the side reveals another unique design element that will make this model instantly recognizable as the new 2019 Blazer: the shape of the greenhouse / Day Light Opening (DLO), particularly the section where the roof element and the belt-line come together at the C- and D-pillars. The treatment leaves a small gloss black space between both elements, which runs into the tailgate. As is the case for most new Chevrolet models, the Blazer name is affixed to the front doors.

Other notable elements include wheels that (seem to be) 18 inches in diameter with a dual five-spoke pattern, along with body-color door handles and black longitudinal roof rails. The daytime front running along with the taillights wrap around to the side of the car, providing a more dynamic appearance and better visibility of the vehicle for other motorists. 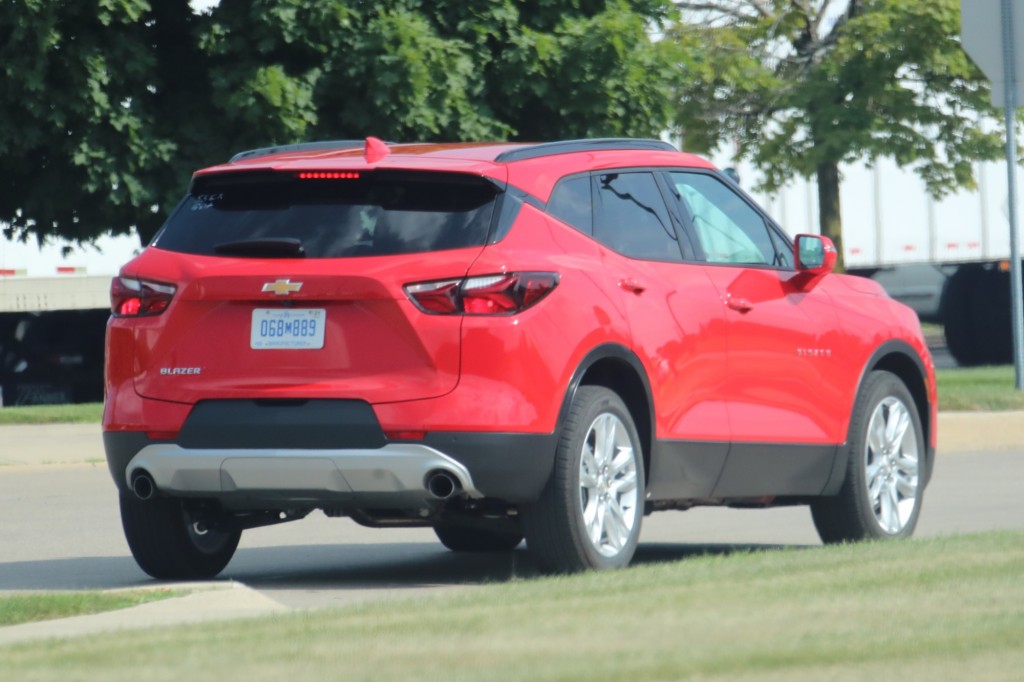 The rear end starts off with a body-color tailgate-mounted spoiler, high-mounted LED CHMSL, and a rear window wiper. Notably, the Blazer features an exposed rear wiper, while its more premium C1 platform mate, the Cadillac XT5, conceals the wiper beneath the rear spoiler.

The unique treatment of the junction between the roof and greenhouse (between the C- and D-pillars) is noticeable via a mostly vertical gloss black element to the left and right of the rear window, which is in fact part of the rear spoiler design. This element merges into the gloss black  upward-sloping element that separates the roof from the belt line.

The taillights are pure Chevrolet and have a significant amount in common with those of the Equinox and Traverse, while differing substantially from the new units introduced on the 2019 Camaro and 2019 Malibu.

We have reason to believe that the elements described from this point forward are unique to the Blazer LS and LT trim levels: the body-color liftgate gives way to a plastic gray insert just above the rear bumper cover. Like in the front, the lower fascia at the rear features a silver/chrome accent and dual exhaust via two circular outlets. By comparison, the range-topping Blazer Premier finishes the grey plastic pieces in body color while adding a trapezoidal exhaust treatment, and the Blazer RS features glossy black lower fascia elements with the same trapezoidal exhaust outlets as the Premier model. 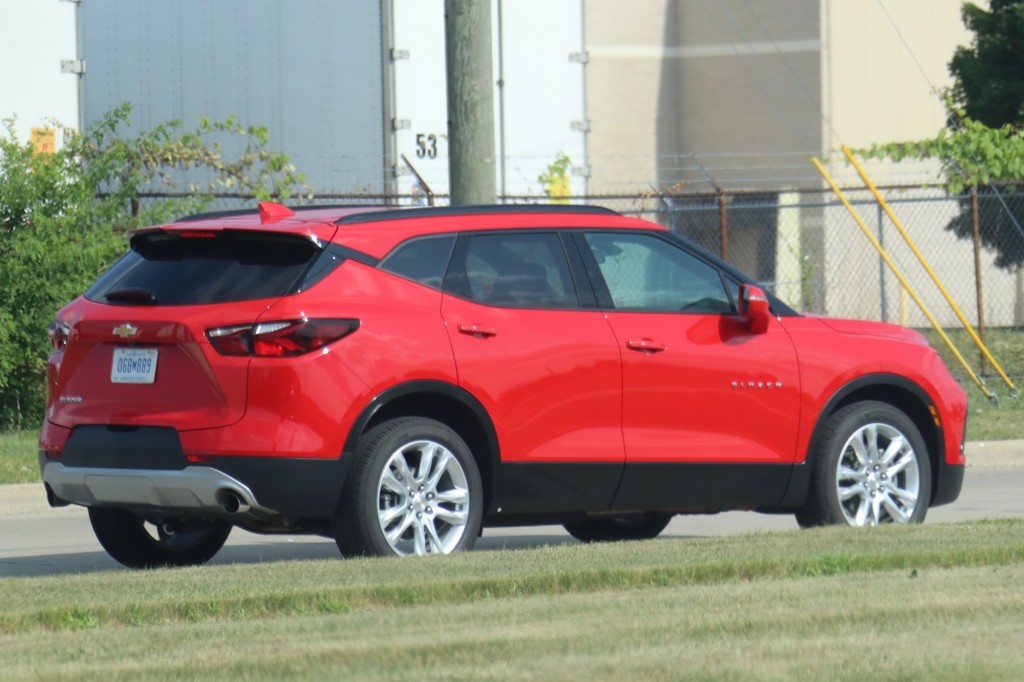 Under the hood, the 2019 Blazer will offer two engines:

Both engines will be paired with the new GM 9-speed automatic transmission.

Enjoy the photo gallery, and tell us how you like the mid-tier model of the new 2019 Blazer in the comments. 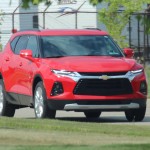 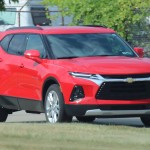 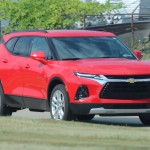 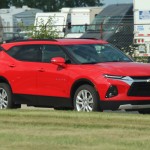 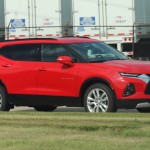 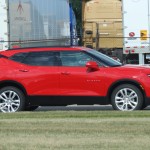 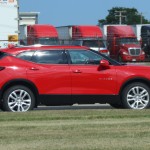 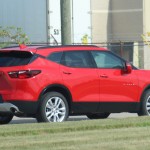 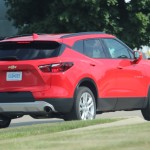 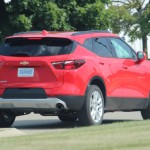