GM is executing a double-pronged strategy in transitioning to the all-new 2019 Silverado and Sierra. The approach involves:

This strategy of overlapping production of two different truck generations has been used previously by GM and by other automakers, as it allows for steady levels of inventory and sales volume (thanks to the last-gen models), while ramping production of the all-new units. That much was already clear (at least to those who read GM Authority on the daily). What was not very clear, however, was which GM plants were carrying out the aforementioned assembly work. We made an infographic to clear up any confusion. 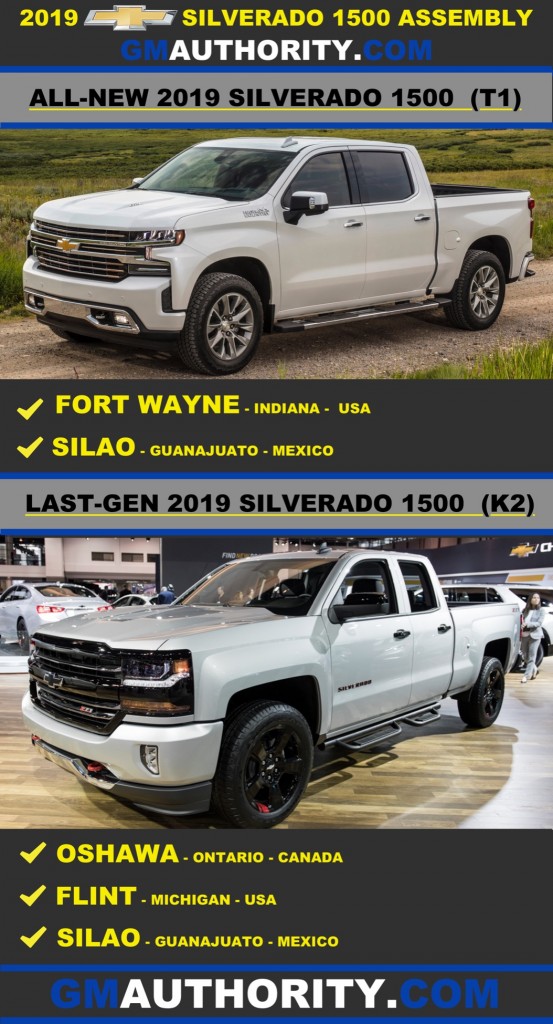 Assembly of the outgoing, last-generation K2-based trucks falls on the following three plants:

During its second quarter 2018 earnings call, GM told analysts that these plants are running at more than 100-percent capacity “to meet demand and maintain inventory for the current-generation pickups during the transition to all-new full-size pickups.”

Notably, the models of the last-gen Silverado and Sierra in production are the Double Cabs with 5.3L V8 L83 engine. GM manufacturing officials have told us that productions of the K2 trucks at these facilities will continue through the end of 2018.

Meanwhile, assembly of the all-new T1-based Silverado and Sierra falls to the following two plants:

As of Monday, August 13th, GM Authority has received a few reports from owners who have ten delivery of their all-new Silverados and Sierras.

Four Plants, Coming Down To Three

So, there you have it: a total of four plants are currently involved in the assembly operations of GM’s all-new and last-gen pickup trucks.

However, it’s all but confirmed that this number will decrease to three facilities once production of the all-new 2019 Silverado and Sierra is running in full force, and there it’s no longer necessary to produce the K2 trucks at Oshawa.