A new patent application filed by Apple for “enhanced automotive passive entry” explores the idea behind using an iPhone to replace a vehicle’s key fob.

The ability to lock, unlock, and even start your vehicle with using smartphone isn’t a new. Owners of the 2011 and newer GM vehicles can already do this using one of the myBrand apps on their smartphone, such as myChevrolet, myCadillac, myBuick, and myGMC (previously called OnStar RemoteLink). GM’s apps, however, work in a very different way from what Apple is proposing.

GM’s myBrand mobile apps allow users to remotely lock/unlock the doors to their vehicle, start the engine and sound the horn and lights; myChevrolet app pictured

Since key fobs already function based on the concept of proximity rather than direct contact, Apple suggests this same method can be applied to an iPhone or even an Apple Watch. The rationale behind Apple’s patent is that key fobs can be “bulky and be an additional item that a user must carry.

How It Would Work

The patent suggests that the technology used to determine the range and position of key fobs can be improved upon, as the “magnetic signals emitted from magnetic antennas” are of a short range. In addition, current proximity technology is susceptible to hacking, and a key fob running on an iPhone or Apple Watch would surely be more secure. We should note that yet another approach to the security concern is the use of blockchain technology, which Porsche has already successfully tested in its own vehicles… but that’s a discussion for another time. 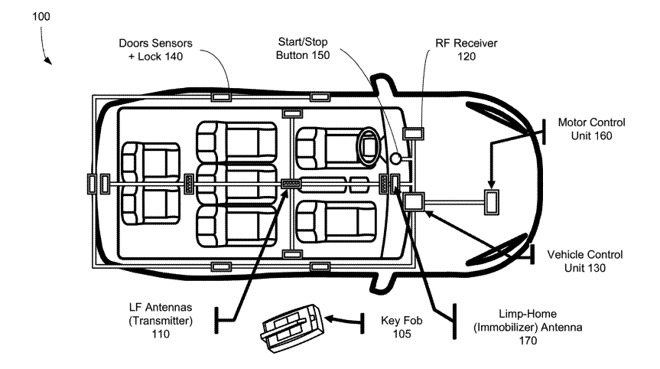 In technical terms, Apple has proposed the use of both magnetic antennas and radio frequency (RF) antennas as means to determine the range, signal strength, and other data pertinent to the functionality of such technology. In turn, these processes would enable the system to detect at a far greater range than the systems currently in place.

In addition to the security benefits as well as having one less item to carry, the proposed system could also be used to increase safety measures. Since the technology would be able to determine where the phone is located inside the vehicle, it could potentially prevent the engine from starting if the phone is not located in a designated area.

There’s also a key difference between GM’s current implementation of the functionality included in the myBrand apps and what Apple is proposing in its patent. GM’s solution never talks to the vehicle directly, instead using GM’s OnStar subsidiary as an intermediary of sorts. In this use case, the phone technically never contacts the vehicle directly, but instead sends a command (such as to unlock a door) securely via the internet to OnStar, which then processes the command and sends it back out securely via the internet to the vehicle. The process is repeated in reverse to give the user a message of success or failure on their smartphone. In that regard, the smartphone and app serves as a useful companion to the vehicle’s actual key/key fob.

By comparison, Apple’s patent involves the phone having direct contact with the vehicle, thereby circumventing the internet, which might slow things down. However, we do have to wonder what would happen in case a user lost or severely damaged their iPhone.

At this time, Apple has not yet confirmed concrete plans to implement the technology in question. But if or when it were to be brought to market, would you use it instead of your car’s keyfob? Let us know in the comments.