In the past, all of the 2020 Cadillac CT5 prototypes captured by our spy photographers have worn gobs of camouflage. Designers even went so far as to introduce dummy design elements such as a fake hood scoop, faux bodywork on the front doors, and phony taillamps in the form of a continuous ribbon to make us believe that we’re looking at a Dodge Charger prototype. But the tester our spy shooter caught up with today does away with (nearly) all that, revealing more than we have ever seen about Cadillac’s upcoming   tweener sedan.

Update: GM/Cadillac camo artists fooled us all, as the prototype vehicle seen here is not at all the 2020 Cadillac CT5. Instead, It’s the upcoming Cadillac CT4 – as we have just learned. 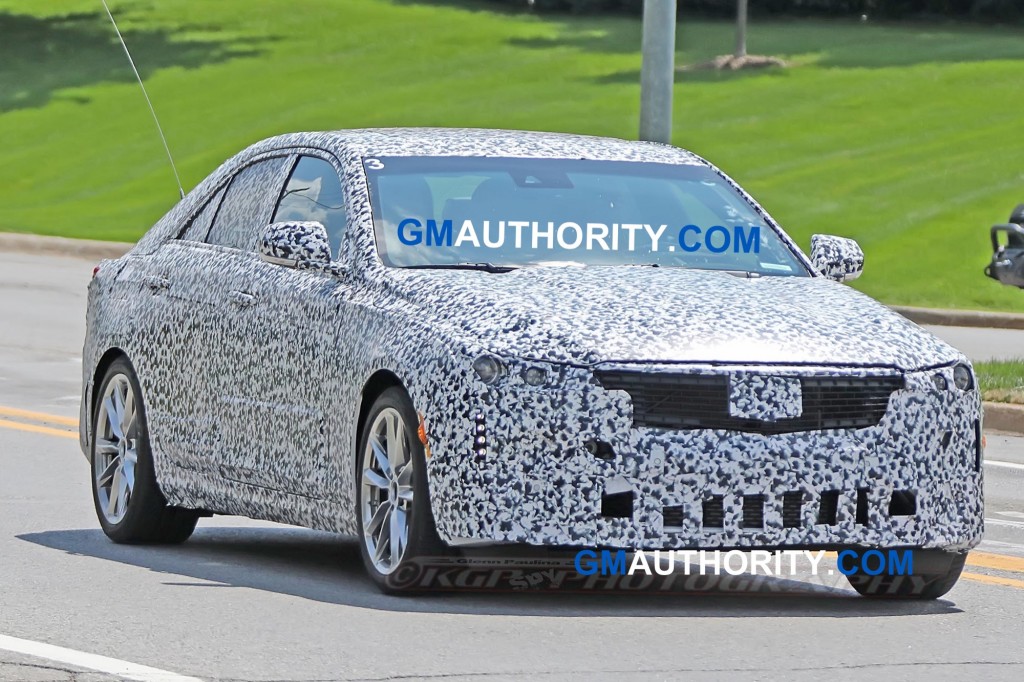 Notably, the front end of this particular model doesn’t appear to be wearing production lights or grille. We can understand not wanting to show the production-intent grille, but the headlights is a different matter – since a CT5 prototype we saw in June was equipped with production headlights.

Either way, we can still make out the general shape of the headlights as having both horizontal and vertical elements introduced in the Cadillac CT6 refresh as well as by the new Cadillac XT4. 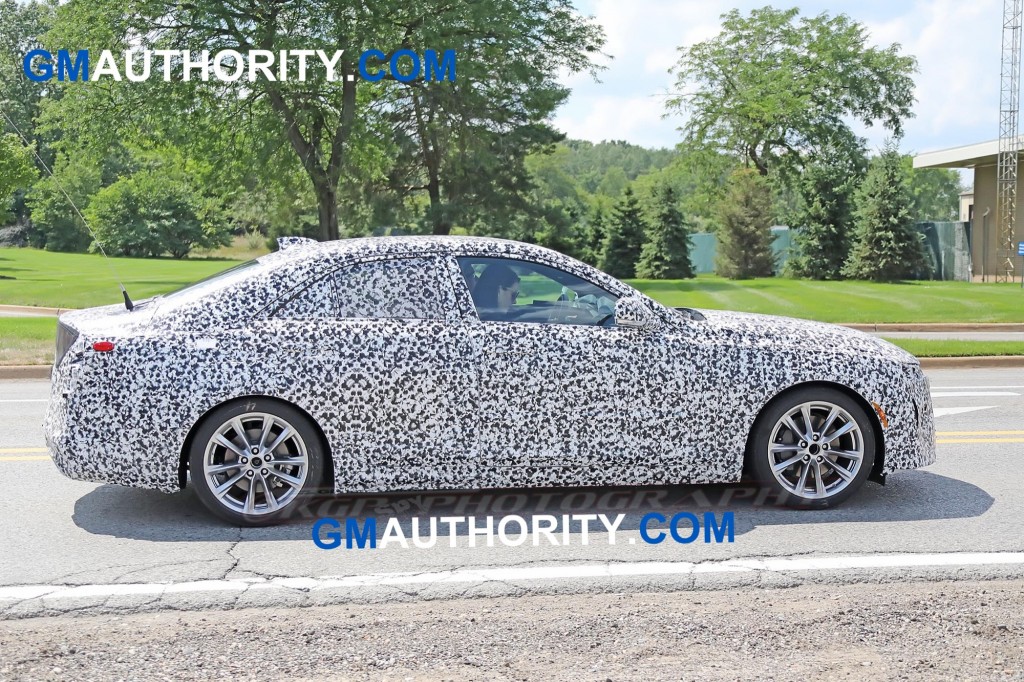 The bigger news is that this prototype has done away with the faux body work on the front doors of prior models as well as the cladding around the C-pillar, revealing the sedan’s true silhouette. Note that the greenhouse trim ends at the junction of the rear door and the C-pillar, rather than extending into the C-pillar with a vanity window, like on the larger CT6.

This is the first time we have seen these twin five-spoke wheels on a 2020 Cadillac CT5 tester. The rims are wrapped in a set of sporty low-profile tires, with the combination filling out the wheel wells quite nicely. 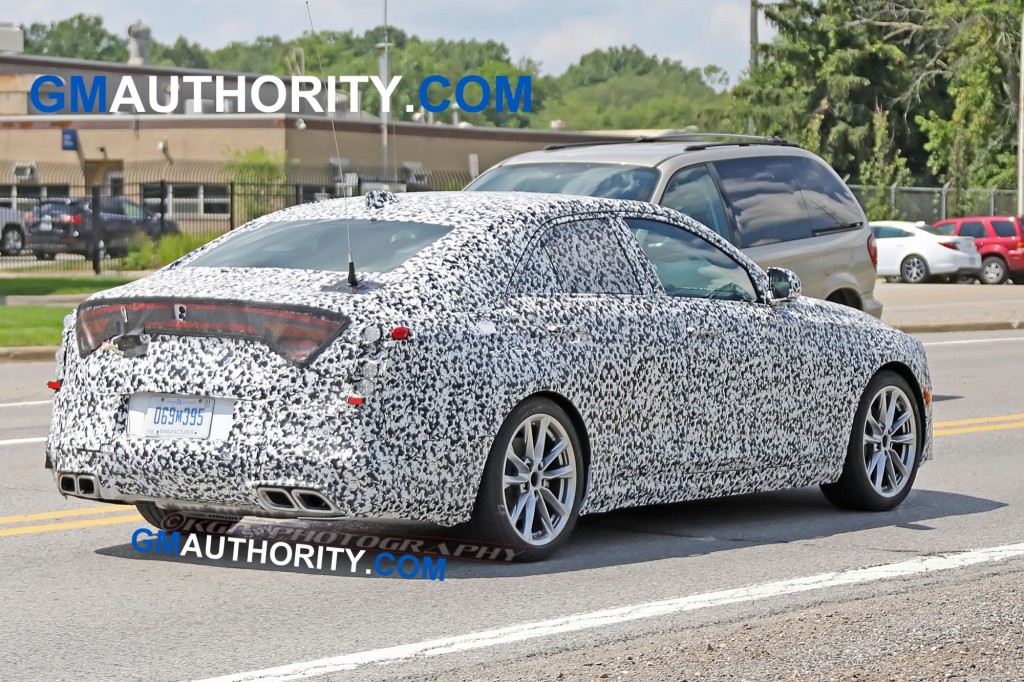 As with prior prototypes, this CT5 tester’s camo around the taillamps tries to fool us into thinking that we’re looking at a Dodge Charger and its signature uninterrupted ribbon lights. But look at the outermost portions of the rear end, and you’ll see hints of Cadillac’s signature vertical taillights. Rather than the connected taillamp design seen on the prototype models, expect the CT5 to feature an iteration of the boomerang-shaped taillamps seen on the 2019 CT6. 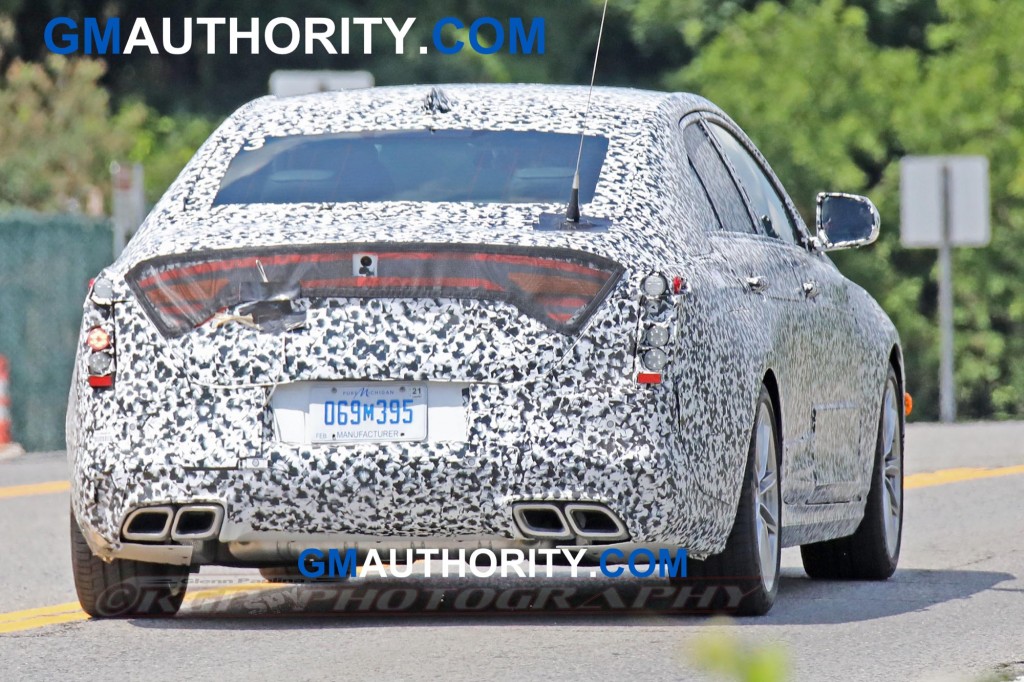 The 2020 Cadillac CT5 is an upcoming Cadillac car range expected to replace both the ATS and CTS lines in Cadillac’s product portfolio. The vehicle will slot between the ATS and CTS lines in terms of packaging, pricing, and feature set. A CT5 Coupe variant is likely, as are high-performance CT5 V-Sport and CT5-V models. A CT5 convertible is possible later in the model’s lifecycle.

Exterior styling is expected to be heavily based on the Cadillac Escala concept, with horizontal and vertical lighting elements throughout. The cabin will feature an all-new horizontal layout for the center stack, similar to the one introduced by the 2019 Cadillac XT4. Cadillac’s new “Y” trim level strategy will be present and accounted for, offering different personas for various customers.

The CT5 is expected to adopt the general design direction of the Cadillac Escala Concept, pictured

The 2020 Cadillac CT5 will ride on the GM Alpha 2 platform, an updated version of the highly-acclaimed GM Alpha platform introduced by the ATS and CTS, and subsequently used by the sixth-gen Chevy Camaro.

Expect a reveal in the next six months, and an on-sale date in the first half of the 2019 calendar year as a 2020 model.

The 2020 Cadillac CT4 is an upcoming Cadillac car range that will slot in the subcompact “C segment”. It will in many ways be a spiritual successor to the Cadillac ATS, as the CT5 straddles the space between the ATS and CTS. A high-performance CT4-V variant is forthcoming, but it’s currently unclear whether the model will derive coupe and convertible variants.

The 2020 Cadillac CT4 will ride on the GM Alpha 2 platform, an updated version of the highly-acclaimed GM Alpha platform introduced by the ATS and CTS, and subsequently used by the sixth-gen Chevy Camaro.

Expect a reveal in the next ten months, and an on-sale date in the second half of the 2019 calendar year as a 2020 model.