This low weight translates into endearing track manners, and helps make it a ringer of a vehicle for SCCA autocross competitions, likely for either the B Street (with the V6 Camaro 1LE) or F Street classes (with the base Camaro SS), when it becomes categorized for next season. To wit, a base Camaro Turbo won the D Street category at SCCA Solo Nationals last year, and a highly modified 2019 Camaro Turbo 1LE driven by GM engineers won the CAM-C class at the V8-oriented SCCA CAM Challenge earlier this month. The car is highly competitive, and motorsport pilots have taken notice.

Who Is It For?

A bare-bones 2019 Camaro turbo starts at $26,495. And like the Camaro V6, the 1LE package for the Camaro Turbo is an additional $4,500. At a starting price of $30,995, the 2019 Chevrolet Camaro Turbo 1LE comes in between the prices of cars like the $26,415 Volkswagen Golf GTI and $41,120 Ford Focus RS, but comes just above of the $29,360 Ford Mustang EcoBoost equipped with the Performance Pack. As you can visualize, the spread is quite large, and the market space is wildly competitive. Our tester was a loaded up 3LT model (that means leather, dual-zone climate, and Bose sound) that came equipped with optional $1,595 Recaro seats and $1,300 Performance Data Recorder, tipping the scales at $33,450.

Just based on the MSRP alone, chances are that potential customers only have the money for one vehicle. This means that these entry level performance cars have to be just as practical as they are fun to drive, which the hot hatch segment provides. Utility is a key factor here, and not just in terms of daily livability. Any regular autocross or track driver knows that it’s a necessity to have a dedicated wheel/tire set for those special days, and these bulky items can fit easily in anything with a lift-back. We’re going to take this moment to point out that the F-Body Camaro had this level of utility.

The name dropping didn’t stop with Volkswagen and Ford performance hatchbacks. Chevrolet even mentioned the Honda Civic Type R in the market space its trying to annex – but there’s likely next to nobody that will cross-shop the apex predator of front wheel drive with a Camaro, despite the Honda starting at an appealing $34,700. A more coherent cross section of the Camaro’s competition comes to be the BMW 2 Series, Nissan 370Z, upcoming four-cylinder Toyota Supra, and of course, the Ford Mustang EcoBoost.

The other headwind for this car is that there are a lot of superb options on the second-hand market right now. A quick browse on any automotive online marketplace will show a 505 hp C6 Z06 Corvette – a legend – going for within a couple grand of a 275 hp Camaro Turbo 1LE. Or, to put it another way, as much money as it would take somebody to jump to a Camaro V6 1LE. Just as well, buyers with some imagination could opt for the $26,455 Toyota 86, $6,000 less than a Camaro Turbo 1LE, and build up their ride with the difference. However, few vehicles are this approachable and capable from the showroom.

There are a couple of major draws why one would opt for a Camaro Turbo 1LE. Firstly – it has a track-backed warranty. If there’s a mechanical failure at the track, GM is supposed to cover it. Bin it into the tire wall because you ran out of talent, however, and that’s on you. Thankfully, the optional Performance Data Recorder – which is another great reason to get a Camaro Turbo 1LE – captures all sorts of information (including live footage, speed, racing line, and braking) to either accelerate the learning process for beginners, or for the seasoned track rats to fine-tune their technique. And despite our concerns about where the racing tires are gonna go, people will still manage around it.

To state the obvious, there remains the imposing muscle car aesthetic buyers get with the Camaro that they won’t get from the hot hatches, and it’s reinforced by a proper RWD layout. 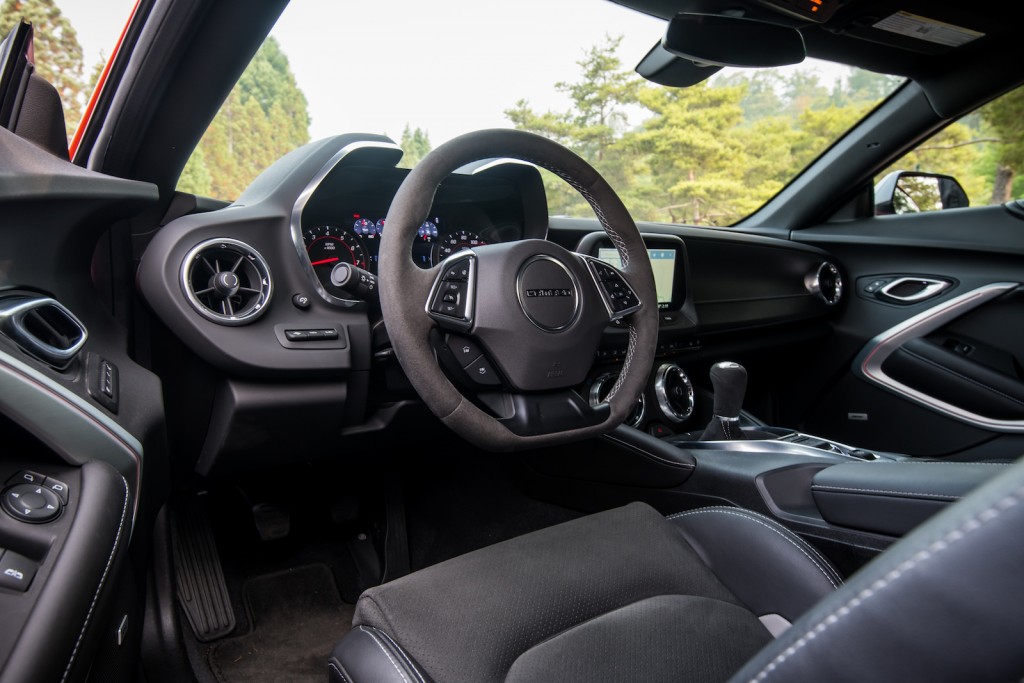 How Does It Go?

The Goodyear Eagle F1 Asymmetric 3 run-flat borrowed directly from the Camaro SS measures P275/35R20 in the rear and P245/40R20 up front. It’s a great street tire and, at .97G lateral grip, didn’t really have us seeking more traction on the road course.

Uncorked on the track, the handling of the car is enthralling. In addition to the tires, the 275 hp Camaro Turbo 1LE borrows tires, brakes and FE3 suspension package from its V8 big brother with 455 horsepower. And it rides on an architecture that enthusiastically handles 650 horsepower. The chassis tuning of the 2019 Camaro Turbo 1LE puts it well above the asking price, and well above its stereotypical muscle car brand cachet.

Whatever sensations of rolling, pitching, or loss of grip there might be, the Camaro Turbo 1LE re-centers itself expeditiously, thanks to its wonderfully low heft, and near-even weight distribution. The limit of this car can be found gradually, and there’s never really any sudden bite from the car as that limit is being found. It’s a companion that can be immediately driven quickly by beginners.

Strangely, the weak point of the Camaro Turbo 1LE is the drivetrain, where its otherwise a forte in the Camaro lineup. The 275 hp, 295 lb-ft 2.0L LTG turbo doesn’t have the strength found in the 310 hp/350 lb-ft 2.3L EcoBoost from Ford, nor does it sound particularly enticing. And in a clever way to disguise its lack of power on the high-end of the rev range, the shift indicator lights projecting from the optional Heads Up Display are calibrated to the power band of the LTG, not its redline. The six-speed shifter can also frustrate – it’s not the same system as the SS model – and at times felt overly notchy and downright stubborn, despite the joys of no-lift-shifting. Maybe some day we’ll see a form of the new 2.7L turbo four cylinder in the engine bay of the Camaro connected to the six-speed of the SS model. But for now, the Camaro Turbo is, by our measure, how to get the lightest 2+2 RWD American car on the market today. The engine is also very tuner friendly, having been on the market since 2012 with the Cadillac ATS. It wouldn’t be hard to find some modifications to either make the LTG sound better, or push out more power.

If the people at Chevrolet truly want to gain customers from the hot hatch segment, they need to build one. Manipulating the Camaro to do the job of a hot hatch isn’t the way to go about it, but that doesn’t stop the 2019 Camaro Turbo 1LE from being a RWD lightweight champion, carried to the top by its sharpness and balance. 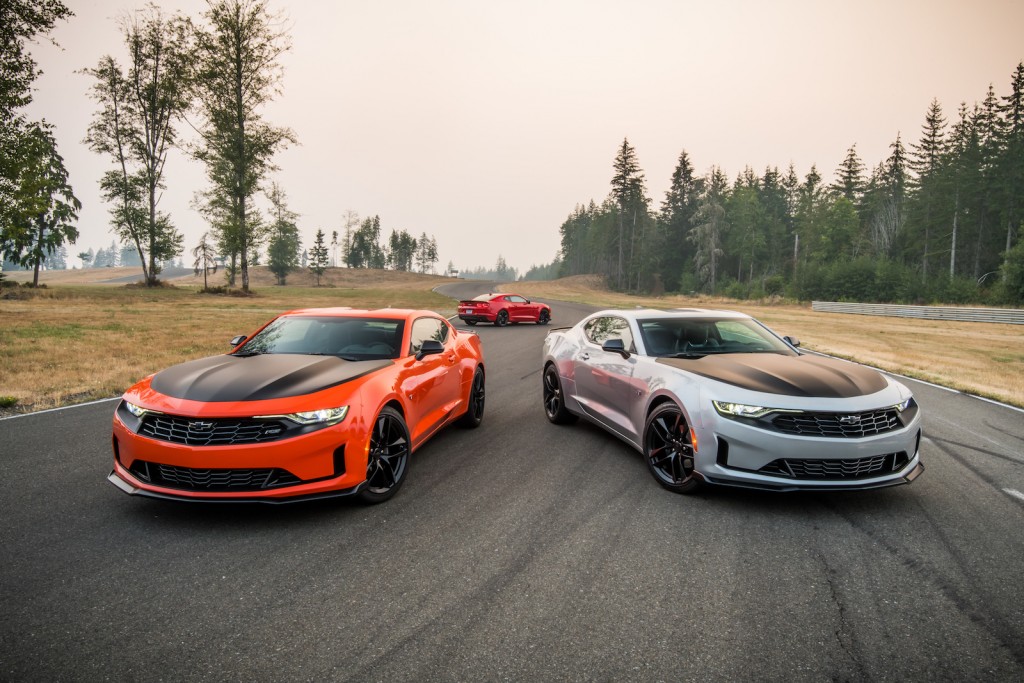