Last year, General Motors announced plans to launch two new all-electric cars in the next 18 months (by 2020), as well as 20 new EVs by 2023. Now, GM Authority has discovered that the automaker will utilize the platform that underpins the Chevrolet Bolt EV for the two upcoming vehicles.

In a presentation entitled Changing The World With AV delivered in November 2017, the automaker’s upper management told investors and industry analysts that it will leverage its existing BEV architecture currently used by the Bolt EV in the near term by introducing two new CUV entries by 2020. 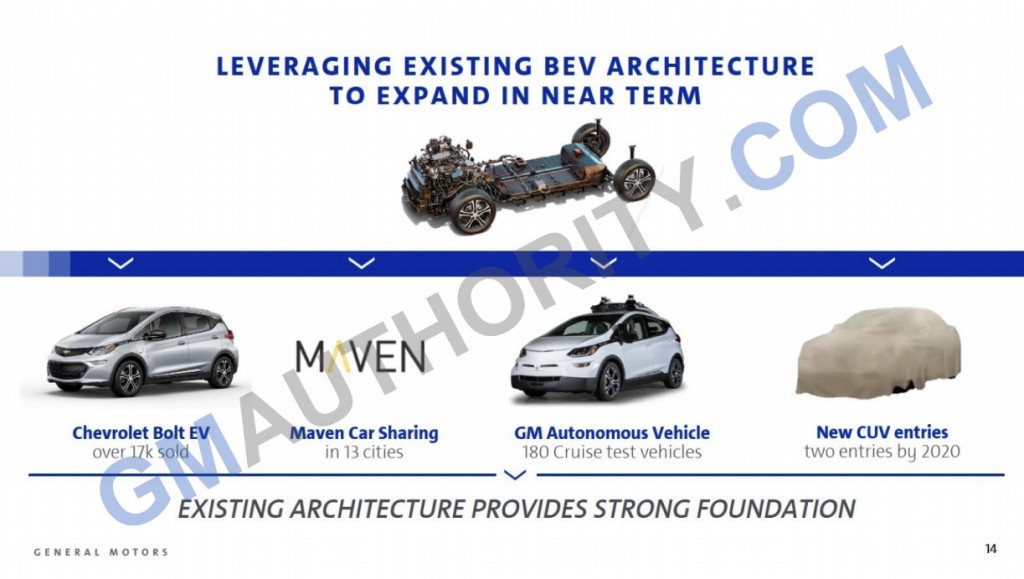 A slide from a GM Presentation entitled “Changing The World With AV” indicates plans to use the Bolt EV’s BEV architecture for two new CUV entries (November 11, 2017)

The platform that underpins the Bolt EV started out as a heavily-modified variant of the electrified version of the Gamma platform used by the Spark, and Spark EV, which preceded the Bolt. During the course of the Bolt’s development, however, engineers ended up creating an entirely new electric vehicle platform that is internally known as Battery Electric Vehicle 2, or the BEV2 platform.

It’s currently unknown what two future GM crossovers the architecture will underpin, but reading the tea leaves gives us reason to believe that one of the two future GM electric cars might be a production version of the Buick Enspire concept revealed earlier this year in China. GM showed a photo (above) of an unbranded future electric crossover during a presentation at the 2017 Barclays Global Automotive Conference. Hours after posting slides of the presentation online, the automaker quickly replaced the above image with one of a covered vehicle.

The second future GM electric crossover is unknown at this point. The model could be a longer version of the Bolt EV with three rows of seating, or perhaps the long-awaited subcompact GMC crossover.