General Motors has filed two trademark applications to register the terms Verity and Maven Verity with the United States Patent and Trademark Office (USPTO), GM Authority was first to discover and report.

Filed on June 29th, 2018, the filings are assigned USPTO serial numbers 88020515 (Verity) and 88020539 (Maven Verity), and the applications state that the terms will be used in conjunction with the Goods and Services categories of: 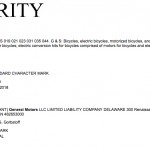 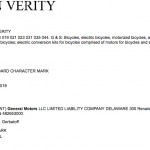 This is the second time that we have seen General Motors refer to bicycles and some form of motorized bicycles in conjunction with its Maven transportation and car sharing service. In October 2016, GM filed a trademark application for Maven that referenced the following Goods and Services categories:

That filing made us wonder (nearly two years ago) whether GM was planning to enter the business of bikes and e-bikes, and this June 2018 application for Maven and Maven Verity serves as further proof that The General is planning to expand Maven into electric bicycles, likely as a way to solve the “last mile problem”.

Notably, the “last mile problem” takes place when a consumer interested in using a car sharing service (like Maven) is deterred from using the service because he or she is unable to get to the location of the parked shared car by being too far away. In such an instance, an electric bike would help alleviate the last mile problem.

So, two GM trademark filings roughly two years apart associated with bikes/e-bikes should serve as a solid confirmation that GM is looking to introduce bikes into its Maven transportation service. The more pertinent questions revolve around how GM will implement e-bikes into Maven:

Stay tuned to GM Authority as we follow this story, and for more GM news and Maven news coverage.