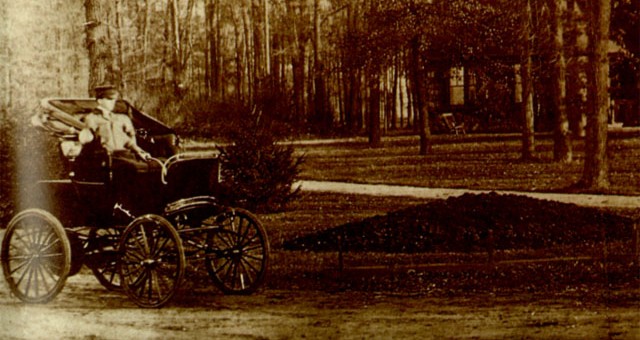 At the turn of the 20th century, gasoline-powered cars were a minority. Instead, electric cars were more reliable and less complicated. Thus, some of the first Oldsmobile cars developed were actually electric vehicles.

Outright Olds tells the story of the Olds Motor Vehicle Company, established in 1897 by Ransom. E. Olds. After a year of development at his Detroit, Michigan, factory, he decided electric cars would help diversify the company and provide a better solution for early car adopters. Even though gasoline-powered cars were more affordable, Olds saw potential in the electric car and its benefits.

The least expensive Oldsmobile electric was to sell for $1,600 (yearly income hovered around $468 in the early 1900s) and Olds allocated a great deal of space to begin producing electric cars. But, in 1901, the factory caught fire and just one car was saved: an Olds Curved Dash model. The fire actually spurred sales of the Curved Dash, which sold for $650, and plans for electric cars were ultimately scrapped.

However, if the fire never broke out, the automobile could have been quite different. Evidence shows Oldsmobile was sincere about pushing electric cars after catalogs showed drawings of additional electric car models, the Cabriolet, Stanhope and Phaeton. A trade journal from 1900 also showed Olds placed a large order for batteries from a Cleveland, Ohio, company.

Yet, gasoline became an easy solution for motorists and the internal-combustion engine quickly turned into a more reliable contraption. America’s love affair with cars only grew throughout the 20th century