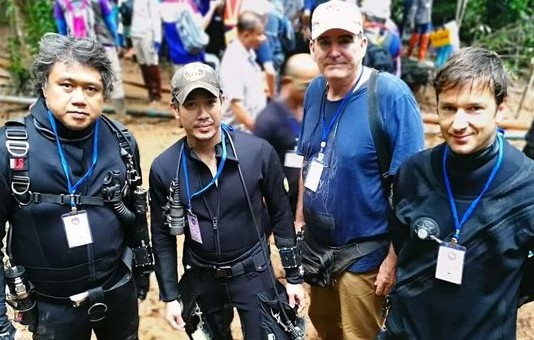 For days, the world watched as the Royal Thai Navy worked to rescue 12 boys trapped in a flooded cave in Thailand. One of millions watching was General Motors’ information technology launch manager Ruengrit Changkwanyuen. It just so happened Changkwanyuen is also a dive master.

He volunteered his time and expertise to help rescue the 12 trapped boys and GM CEO Mary Barra has since recognized him for his bravery, the Detroit Free Press reported Wednesday. Changkwanyuen has traveled the world for his work with GM but learned to dive in the Great Lakes in the United States.

He spent most of his time in open waters exploring shipwrecks, but in 2005, he earned the dive master title and began exploring cave diving in 2010. Fortunately, cave diving is exactly the expertise the Royal Thai Navy needed.

“When you break into wreck diving and cave diving, it requires more discipline and planning. Cave diving is very technical,” Changkwanyuen said. Unlike open-water diving, if something goes wrong during cave diving, it’s difficult to resurface and poses a new set of challenges.

Changkwanyuen first volunteered as an equipment specialist and consultant for the Navy SEAL time, but he then transitioned to a liaison and coordinator for dive teams from the U.S. Navy, China and Australia. He called it a major relief when the first boy emerged, and then 11 others followed.

Barra sent Changkwanyuen a personal email after she learned of his actions in Thailand.

When I learned that one of our own was at the forefront of the efforts, I was reminded of something I keep discovering — never to be surprised by the bravery and commitment of the men and women of General Motors. Your dedication to doing the right thing embodies the very best of human nature.