General Motors Company shares recovered some of their value in Friday trading after experiencing their biggest one-day drop earlier in the week. 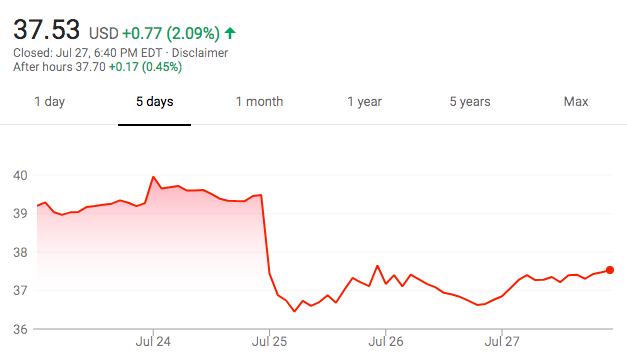 The reason for the steep drop is widely believed to be the automaker’s second quarter 2018 earnings, as the automaker revealed that costlier raw materials and unfavorable exchange rates in Brazil and Argentina will negatively impact its earnings for the year. The headwinds will cost the company approximately $1 billion in profit in 2018.

As a result, GM has adjusted profit outlook for the year downward, signaling earnings of about $6 per share for 2018. Earlier in the year, the auto giant forecasted earnings in line with last year’s figure of $6.62 per share.

During Q2 2018, General Motors’ pretax profit fell 13.3 percent to $3.2 billion. The automaker’s North American operations – by far its biggest and most profitable, were impacted more than any of its other regional divisions.

It would appear that investors at large have reconsidered GM stock as an investment opportunity on Friday, despite the initial sell-off after the unfavorable Q2 2018 earnings report and associated downward forecast adjustment.

Could it be that Wall Street views the GM’s various non-core efforts, such as monetizing autonomous vehicle division, as major contributions to the automaker’s bottom line? Stay tuned as we learn more.