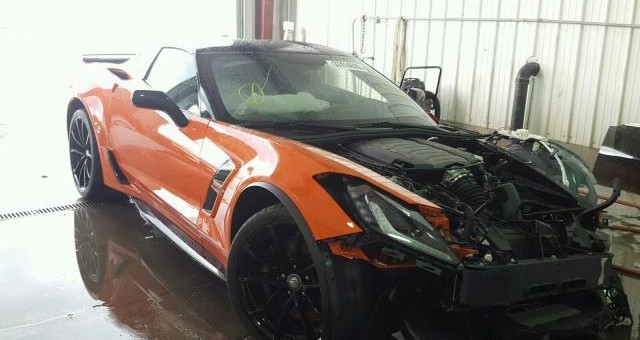 Well, I assume it was fun, while it lasted. Drivers of the McLaren 720S and 2019 Chevrolet Corvette apparently couldn’t handle the power of their new toys.

While out for a joy ride in the suburbs of Washington DC, a driver, in their one-day-old McLaren 720S, lost control of the car and hit a tree, leaving the $300,000 vehicle destroyed. Reports released by the Fairax County Police Department said the accident was caused, “because of speed.” But of course.

Coincidentally, around the same time, a brand-new orange 2019 Chevrolet Corvette Grand Sport with only 15 miles on the odometer now lies a complete wreck in a warehouse in Lincoln, Nebraska and is on the salvage auction site, Copart. With its front driver side corner crushed, a wheel not in place, and damage to the undercarriage, the current bid is upwards of $13,000. After reviewing the front end damage it is surprising that the engine looks practically untouched.

The 6.2L LT1 V8 in the Corvette, which makes 460 horsepower and 465 lb-ft of torque is clearly enough power to cause some serious damage if you can’t tame it. As for the McLaren, its more exotic twin-turbo 4.0L V8 makes 710 hp and 568 lb-ft of torque. With such capability, it’s easy to see how either the McLaren or the Corvette can get away from the less skilled of drivers.