The Chevy Traverse got a complete overhaul for the 2018 model year, consisting of a complete redesign and re-engineering. The new model represents the second generation of the Traverse nameplate, with the design of the all-new model being significantly different that its first-gen predecessor, which was introduced for the 2009 model year and ran all the way through 2017.

Chevrolet describes the all-new 2018 Traverse as having a look inspired by its full-size SUVS, with purposeful proportions complemented by premium cues such as chrome accents, LED signature lighting and available D-Optic LED headlamps.

“The all-new Traverse blends Chevrolet’s characteristic SUV cues with capability and refinement,” John Cafaro, executive director, Global Chevrolet Design, was quoted as saying. “Inside and out, it offers style with a purpose.”

We’ve heard an overwhelming amount of positive acclaim when discussing the 2018 Traverse with other automotive journalists and car shoppers alike, and for good reason: no matter what angle you’re looking at, the new model is a looker… and in this installment of the GM Authority Photo Comparison, we’re going to highlight how the all-new Traverse differs from the outgoing model.

The new Traverse’s sculpted front end is distinctively Chevrolet, and brings the Traverse nameplate into the modern era. The hood features tasteful surface styling, bringing the focus into a large variation of Chevy’s signature dual-port grille looks right at home on the full-size model, while the significantly more narrow headlights with LED daytime running lights (standard on all models) contribute to the Traverse’s dramatic appearance. High Intensity Discharge (HID) headlamps are standard on all models, while the Premier and High Country models get even more potent D-optic bi-function projector LED headlamps.

The foglights on the lower end of the front fascia are pushed out to the corners, accentuating just how wide the new Traverse truly is. The fact that the new Traverse continues to use wing-mounted side mirrors gives it an even sportier appearance, and doesn’t make the mirrors look like “ears” – a factor commonly associated when vehicles use a pedestal-style side mirror mount.

From the front three quarters position, the beauty and presence of the new Traverse is even more apparent. Rather than a rounded, unoffensive profile, the new Traverse is bold. It’s perhaps from this angle that the influence from full-size Chevrolet SUVs is most noticeable. 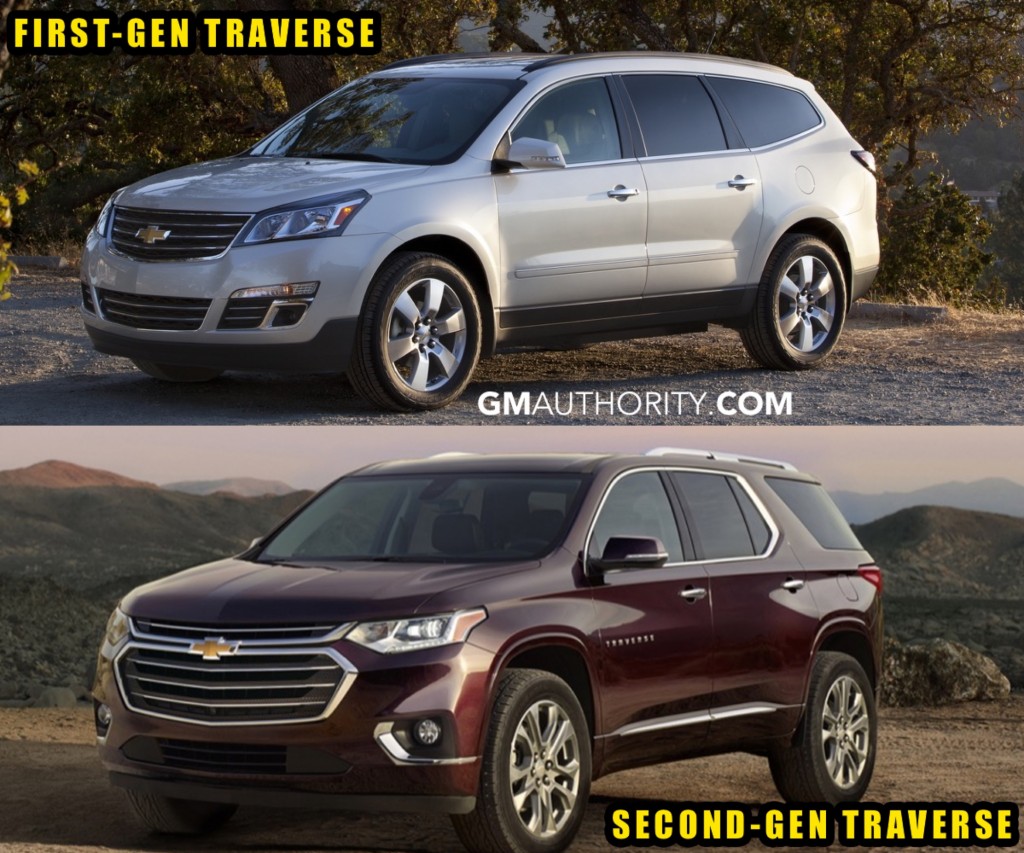 One of the key elements that make the new Traverse look so good is its bold and confident stance: the two inch increase in wheelbase length with a slight decrease in overall length naturally helps proportions, but the blocky, muscular surface detailing over the front and rear wheel-wells as well as the vast abundance of straight, bold lines contribute the most to the uncompromising stance.

The side profile includes various minor but vital details that contribute to the bold yet refined appearance. In the front, wrap-around headlamp assemblies with narrow edges flow into a concave character line that ends an inch or two below the door handle on the front doors. Faux-running boards with a chrome highlight and the TRAVERSE nameplate break up the vast amount of vertical sheetmetal on the doors. The sheet metal noticeably widens as it reaches the rear wheel well – just look at the area just ahead of the rear wheel. Like the headlight housing, the taillight assemblies wrap around and become narrower as they flow toward the front of the vehicle, running into a rather straight character line.

On higher-end models, large 20-inch wheels fill out the wheel wells, which are rounded but feature a hint of squared-off style. Lower-end models get 17- and 18-inch wheels that don’t look quite as substantial. 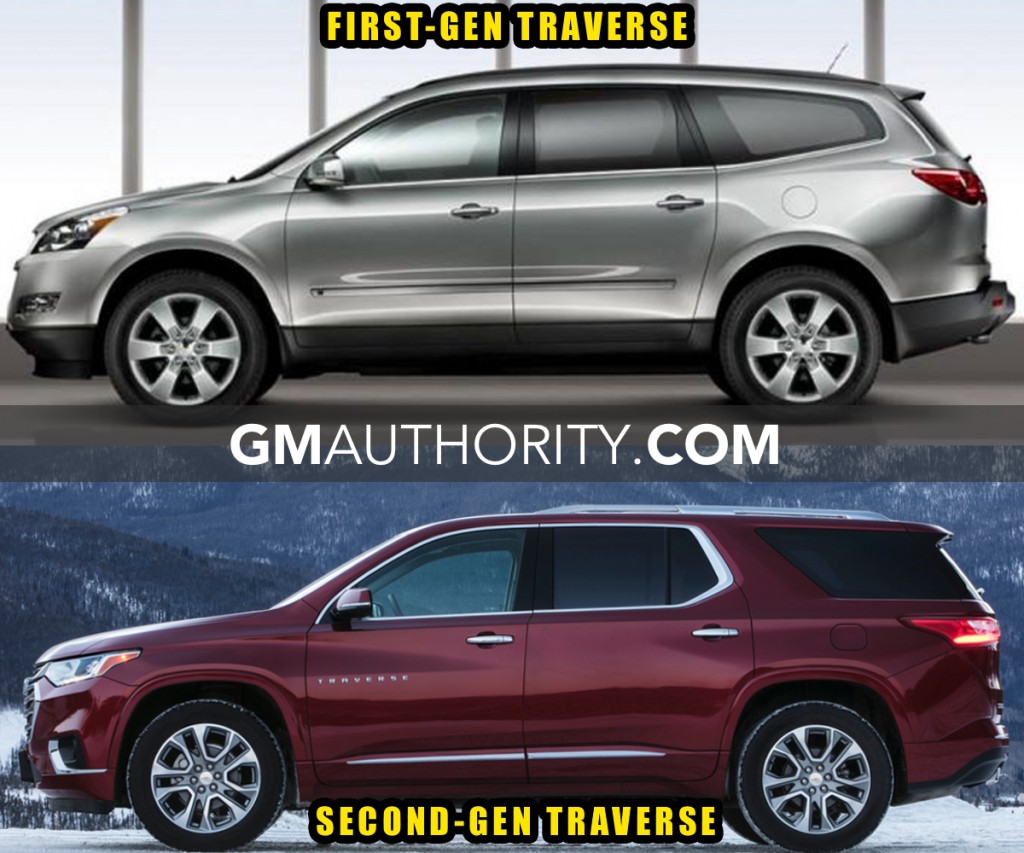 Chrome DayLight Opening (DLO) trim is uniquely applied on the new Traverse, getting thicker just aft of the C-pillar. This helps focus the attention on the passenger compartment, as opposed to the cargo area. The C-pillar treatment is quite unique: it is prominently exposed and leans forward, while its equivalent on the previous model was not at all accentuated on the exterior. Instead, it was disguised by some glass and a black plastic trim piece – which were functional but didn’t do much for the model’s design.

Out back, the liftgate-mounted spoiler is not only functional, but also has a design purpose: it contributes to the new Traverse’s aerodynamic properties while visually extending the length of the model.

The rear end of the new Traverse continues the bold yet refined theme established at the front and side profiles.

Starting at the top, the aforementioned liftgate-mounted spoiler provides a visual effect that makes the crossover look longer. Another unique element is the junction between the D-pillar and the liftgate: given that both are black, the D-pillar seems invisible, making it appear as if the roof past the C-pillar is “floating”.

The taillights perfectly communicate the Chevrolet design language that is apparent across the entire lineup. As they wrap around, they run into a character (shoulder) line that runs the entire length of the crossover. We should note that the taillamps look incredible in the dark thanks to the LED setup standard on all models.

The lower end of the rear facia delivers a chrome strip that runs the width of the vehicle. Like the fog lights in the front, this element is intended to accentuate the width of the vehicle. Below it, dual exhaust via a set of integrated rectangularly-shaped outlets deliver a uniform appearance by having a consistent shape with the rest of the vehicle (such as the taillights). The outgoing model featured dual exhaust out of round outlets, that looked decent, but always struck us as an afterthought by comparison.