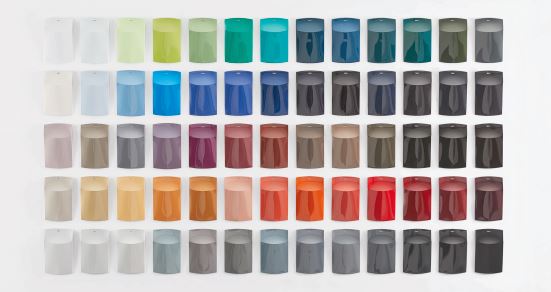 “Keeping it real” is the mantra behind 2018-2019’s automotive global color trend report, according to GM coatings supplier BASF. From gray hues to achromatic colors, this year’s palette seeks to blend the digital and natural world.

In its annual automotive color trends report, BASF notes that as more people spend time online, especially on social media, the lines between the digital and physical world blur. That is why hues of gray and blue are prominent in its 2018-19 palette, because they mimic the color of digital screens and gadgets.

In North America, the German coatings supplier named “metal’s mettle” (a metallic gray), “kleur” (a deep red), and “centripetal blue” (a dark blue) as the most import colors for the region. These darker colors were selected to mimic scientific advancements, passion, and the changing role of vehicles in North America.

With the rise of ride sharing services and autonomous vehicles, BASF predicts that vehicles will transition from a personally owned object to a public mode of transportation, especially in North America. According to the report, “for cars that are designed for sharing, color pallets with a universal appeal will play a significant role.”