General Motors has filed a trademark application to register the term AV1 with the United States Patent and Trademark Office (USPTO), GM Authority has discovered. 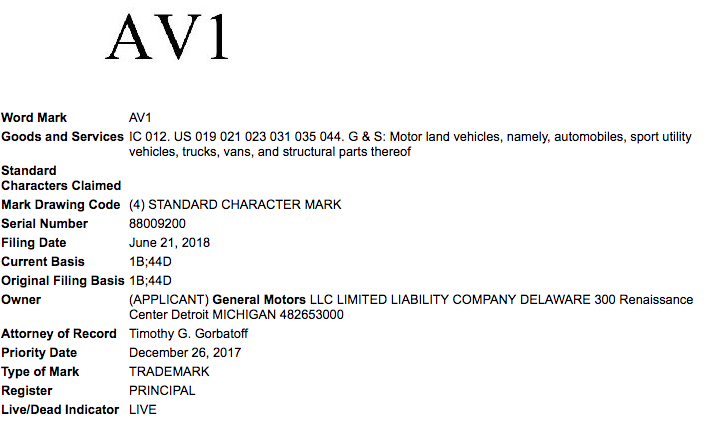 AV1 could stand for “Autonomous Vehicle 1”, a name along the lines of the GM EV1 – The General’s first electric car produced from 1996 through 1999.

We should note that in January, GM announced the Cruise AV – the first production-intent vehicle built from the start to operate safely on its own, with no driver, steering wheel, pedals or manual controls. Along with announcing the Cruise AV, General Motors also announced that it has filed a Safety Petition with the Department of Transportation for the fourth-generation self-driving Cruise AV, asking the department permission to safely deploy the self-driving vehicle in 2019.

As such, the application for the term AV1 could indicate plans to commercialize the Cruise AV, or a vehicle like it. However, the term would run contrary to GM’s strategy on releasing vehicles under its brands (Chevrolet, Cadillac, Buick, GMC, Holden, Baojun, etc.), rather than bringing to market a GM-branded vehicle.