I somehow escaped my youth not having to work either in retail or in the restaurant business. It may be too early to tell, but it’s likely spoiled me for the rest of my days. That’s not to say that I didn’t work. In a previous life, I was a lifeguard for six years. And when we weren’t cleaning the pool deck, or sleepily perched on the lifeguard stand, or occasionally rescuing the struggling toddler, we drilled our first aid and CPR skills. I never really imagined how that would come in handy during a 2018 Buick Regal TourX road trip that traced the famous Oregon Trail.

With Mike and I down in the points after the first day, we had to find ways to catch up (it’s been over a month since this drive, and we’re still salty about those damn biscuits). We awoke early to a brisk Utah dawn in our chilled tents, where we showered in what closely resembled a metal ice bath bucket. It was the last opportunity for hygiene before our stop in Boise, Idaho, some 380 miles away. In between stops is Shashone Falls, where incredible views awaited, as well as the next challenge. 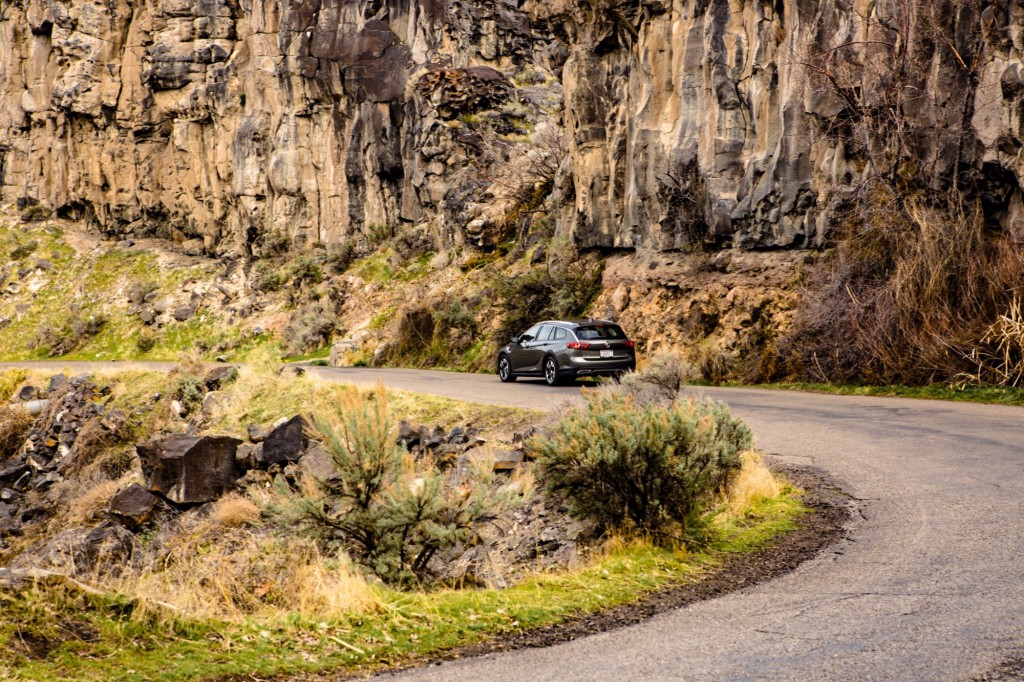 This also meant jumping back in the saddles of our Buick wagon to enjoy Idaho’s vistas, and  80 mph posted speed limits. Damn the torpedoes of fuel economy points and “Smart Driver” score. By now we were well acquainted with this German-built, American-branded machine sold around the world. And with such favorable speed limits, we could really uncork that 2018 Regal TourX without much care for John Q. Law. The Regal Tour X can suck up the miles like a Dyson vacuum cleaner, constantly stable, pointed and proficient in the skills of silence. Buick has been mastering the art of “quiet tuning” over the years, and Regal TourX is no exception. Which means enjoying the road trip tunes of Eric Clapton that much cleaner, without much wind noise, even at barely legal speeds.

After satiating our eyes with some rather mystifying cascades carved into the Snake River canyon, which are otherwise deceiving from the flattened horizon above, Mike and I had a go at wrapping splints for points. Since I had experience in doing so, I took the liberties in wrapping Mike’s leg with two pieces of wood and medical bandage wrap. The twists were that I had to first saw the wood into a more manageable size with a hand saw, and Mike had to crutch-hop some 40 yards, around a sapling, and back to the starting line with a wrapped leg.

We ended up having the second fastest time, but, much like our biscuit scenario, the winners didn’t really make a splint at all. From my years of learning, studying, and re-learning first aid, a flimsy once-over with a bandage isn’t actually supporting any broken limb. We at least took the time for a splint to function as intended. Still, the high-placing finish did close our points spread.

We high-tailed it to Boise for some dinner.