When GM China announced the all-new Buick 2018 Excelle Sedan, many believed that it was just another variant of GM’s global D2 platform shared with the likes of the second-generation Chevy Cruze, Opel-Vauxhall Astra K and Chinese-market Buick Verano. In fact, some publications (we won’t name names) incorrectly identified the new Excelle four-door as being an Opel Astra sedan for the Chinese market. But due to our own investigative work, the platform that the new Excelle sedan rides on has been identified, and it brings to light a major piece in GM’s global product strategy.

First things first: the new Excelle sedan does not ride on the D2 platform. The vehicle is simply too down-market/low-cost and China-specific to utilize what was initially a global platform in the D2 architecture. Knowing that made us wonder whether the new Excelle sedan is underpinned by the GM-PATAC K platform – the chassis that underpins China-specific models as the current Buick Excelle GT, Excelle GX and the Buick GL6.

A week ago, we reached out to several contacts at GM China and Buick China for clarification, but got nowhere until one representative officially told us that the new Buick Excelle sedan is not based on the PATAC K architecture, but is instead “the first product off an all-new global platform.” Try as we might to get the name of the new architecture in question, we were told that The General is not yet ready to share such details.

So let’s use the simple process of elimination to get to the bottom of this: the platform that underpins the new Excelle Sedan is not D2, nor is it GM-PATAC K, since neither platform is “all-new”, as per GM’s own description. That leaves us with two possibilities, one of which is VSS-S, GM’s upcoming vehicle set strategy that aims to place all future front-drive GM cars on a single core vehicle module. That would be a good guess, but GM’s own materials state that VSS is still about two years out, with the first model on a vehicle set set to launch in 2020. That leaves us with the only remaining option: the new GM GEM platform.

Short for “Global Emerging Markets”, GEM is as much a new vehicle platform as it is a holistic product development effort for vehicles destined for emerging markets. In fact, the project also includes a common engine for vehicles riding on the GEM architecture.

GM has been working on the initiative, originally called Project Amber, since the beginning of 2015. The first official confirmation of the project came in July 2015, when GM announced a $5 billion investment for a new vehicle architecture for developing markets. At the time, the announcement was created around the Chevrolet brand as GM focused on strengthening its presence in Latin America. The GEM platform, however, will also underpin some Chinese-market Chevrolet and Buick models.

Another piece to this puzzle are recent reports that peg GM using a single-architecture strategy for its core products in Latin America. That architecture is none other than the new GEM platform.

The GM GEM initiative uses a crucial market forecast: between 2015 and 2030, growth in car sales across emerging markets will outpace expansion in the world’s mature economies. However, new car buyers in said emerging markets have traditionally been relegated to buying new cars that can only be described as “second-rate”. The vehicles represent a very basic, if not plebeian, mode of frugal transportation with sub-standard safety, performance, technology, along with the overall driving and ownership experience. GM’s forecast goes on to state that in the next 15 years, buyers in these markets will come to expect better vehicles with higher levels of technology, safety and efficiency than is currently offered in affordable vehicles in those regions.

With that forecast in mind, GM’s decision to create a specific platform to underpin emerging-market vehicles makes sense, especially when the approach delivers a better product to the customer while allowing GM to benefit financially and optimize its return on the investment. 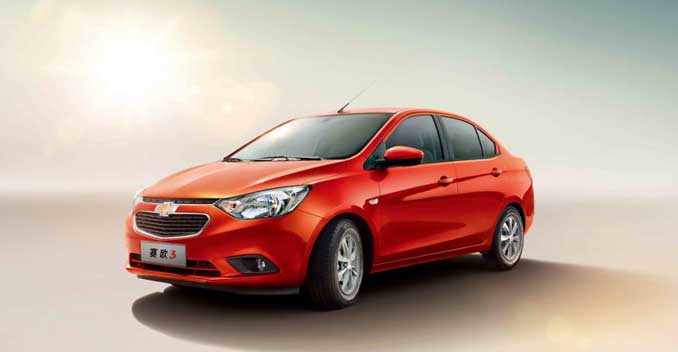 And benefit financially it will: General Motors forecasts that it will sell just over 2 million GEM-based vehicles per year across various developing markets around the world. That’s not insignificant volume, given that the automaker sells roughly 3 million vehicles per year in the United States. With that in mind, GEM delivers significant opportunities for scale economies – which is the whole point.

The GEM platform will enable GM to consolidate several fragmented architectures currently used for vehicles offered in developing markets into a single platform and engine family, thereby deriving savings from the larger sourcing and manufacturing scale. In effect, the new GEM platform will enable GM to create vehicles for developing markets faster and at a lower cost, while also producing them for less.

The platforms that GEM will replace are:

According to all public-facing GM material, the first GEM-based vehicle is set to go on sale in 2019. However, the timeline may have been advanced for Q3 or Q4 of 2018, given the announcement of the new Excelle sedan for China.

When we asked GM China representatives when the new Buick Excelle sedan will launch, we were told that information surrounding the matter will be shared at a later time. 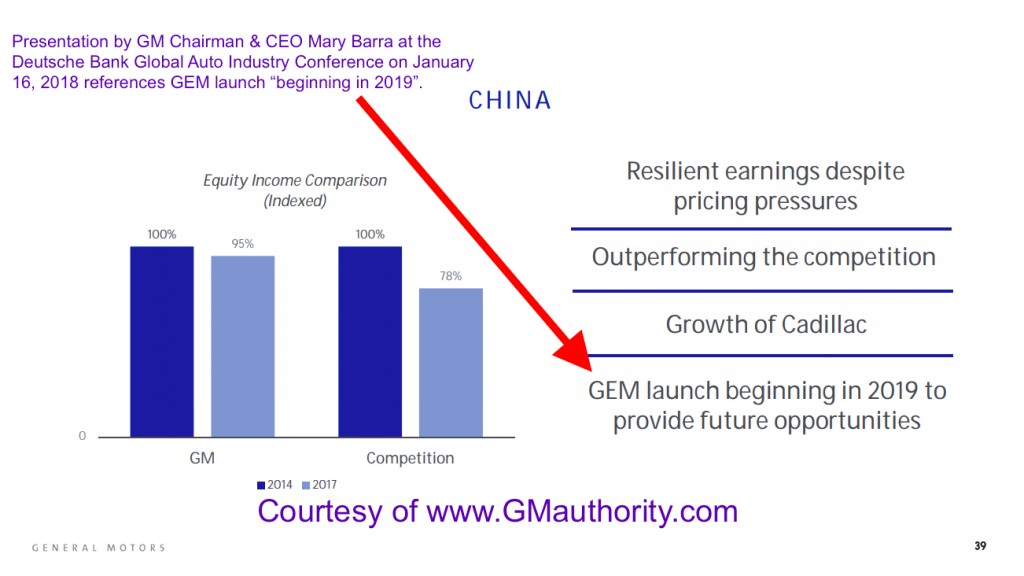 Though the GEM-based vehicles will all be derived from the same new platform, specific models for various regions and countries will be tailored to suit the market’s prevailing customer preferences or regulatory requirements.

Development of the GEM platform as well as for all car lines based on it is taking place at PATAC – the Pan Asia Technical Center – a joint vehicle development venture between GM and SAIC – in China.

After the new Excelle sedan launches, we should see a flood of future models on the GEM architecture, some of which will replace existing models as successors, while others will be all-new entries. Following is a list of GEM-based vehicles we expect to see in the future:

See the following links for more on the platforms in question: