Cadillac surprised us all on Wednesday when it announced the 2019 Cadillac CT6 V-Sport. And the new 2019 CT6 isn’t just for show, with the brand bringing a lot of go by introducing the long-awaited Cadillac 4.2L twin-turbo V8 engine. Assigned RPO code LTA, Cadillac says the engine will be exclusive to its own vehicles, though we have reason to believe that may change in the future.

In developing the new engine, engineers started from a blank slate and focused on performance and small packaging. The result is an engine that pushes out an estimated 550 horsepower at 5,700 rpm and 637 pound-feet of torque between 3,200 and 4,000 rpm in the 2019 Cadillac CT6 V-Sport, along with 500 horsepower and a yet-to-be-determined amount of torque in the non-V-Sport CT6. The new Cadillac V-8 is decidedly different from any GM eight-cylinder engine used over the past eight years for two primary reasons: first, it’s a Dual Overhead Cam (DOHC) design and second, it features a “hot V” configuration, which delivers a tidy and small packaging and astounding performance. The DOHC design lends itself to smoother operation compared to an OHV engine. Also, Dual Overhead Cam engines are typically more powerful than overhead valve engines from a displacement standpoint, though exceptions to the rule do exist. For instance, a 4.2L DOHC motor will likely be more powerful than a 4.2L OHV motor. But despite their more efficient use of displacement, DOHCs are typically larger in physical size compared to OHV engines, since the DOHC configuration is taller as a result of two cams residing above the valves.

The new Cadillac V-8 LTA engine features what is now referred to as a “Hot V” configuration. To understand the Hot V design, it’s worth exploring how a traditional turbocharged engine works first.

In a typical turbo-charged engine, cylinder heads receive air through ports at the top of the engine, while exhaust exits lower through ports outside the manifolds, which connect to the turbos.

In a “hot V” setup, by comparison, intake-charged air enters through the lower outside of the heads and exits through the top inside – where the turbochargers are integrated with the exhaust manifolds. This results in a quick spool-up, translating into more immediate power delivery. The design also enables closer mounting of the catalytic converters, for efficient packaging. The turbos feature a twin-scroll design broadens their performance capability, offering quicker response and greater efficiency. Instead of a single spiral chamber (scroll) feeding exhaust gas from the exhaust manifold to drive the turbine on each turbocharger, the engine’s twin-scroll design has a divided housing with two exhaust gas inlets and two nozzles to drive the turbine. Generally, one of the nozzles contributes to quicker response and boost production, while the other contributes to overall peak performance.

Each of the engine’s integrated exhaust manifolds/turbocharger housings splits the exhaust channels from the cylinder head so the exhaust flows through separate scrolls based on the engine’s exhaust pulses. When matched with precise valve timing, that separation leverages exhaust-scavenging techniques to optimize gas flow, improves turbine efficiency and reduces turbo lag.

The electronically controlled wastegates – one per turbocharger – are used for more precise management of the engine’s boost pressure and subsequent torque response for smoother, more consistent performance. They are independently controlled on each cylinder bank to balance the turbo compressors’ output, for greater boost pressure response. An efficient water-to-air charge-cooling system contributes to the engine’s performance, enhancing the turbochargers’ effectiveness. Similar in concept to an engine’s radiator, the system’s intercoolers cool the boosted air charge before it enters the cylinders. Cooler air is denser, which means there is more oxygen in a given volume, resulting in optimal combustion and resulting more power.

The system on Cadillac’s 4.2L Twin-Turbo V-8 LTA engine features a pair of heat exchangers located above the valley-mounted exhaust manifold/turbocharger housings. The turbos pump pressurized air directly through the heat exchangers and into the cylinder heads. The heat exchangers are cooled by their own coolant circuit.

The intercoolers lower the air charge temperature by more than 130 degrees F (74 C), packing the combustion chambers with cooler, denser air. Also, the system achieves more than 80 percent cooling efficiency with only about 1 psi (7 kPa) flow restriction at peak power, which contributes to fast torque production. Before entering the combustion chambers, the cooled air charge flows through a pair of throttle bodies, one for each engine bank. Each electronically-controlled throttle body has a 59mm diameter opening.

See complete details about and specifications on the Cadillac Twin-Turbo V-8 engine the LTA. 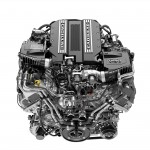 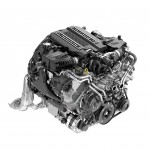 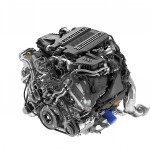