Just hours ago, Chevrolet announced when it would reveal its upcoming 2019 Silverado 4500 and 5500 Medium Duty Trucks while also sharing a teaser image of the vehicle. After manipulating the teaser in graphic design software, GM Authority was able to enhance the image in such a way so as to see more of the front end of the upcoming Silverado Medium Duty truck.

Starting at the top, we see that the 2019 Silverado Medium Duty will have five amber marker lights on the roof: one on each side of the roof flanking three lights grouped in the middle. Large, tow-style wing mirrors with amber marker lights are also clearly visible. All that was clearly visible on the teaser image, with no enhancement needed… so let’s get to the good stuff.

Enhancing the teaser reveals that the front end of the 2019 Silverado 4500 and 5500 will have a huge Chevy Truck-style dual port upper grille as well as double-stacked headlights. The lower facia features a set of rectangular fog lamps flanking a trapezoidal intake. The overall design is very much reminiscent of the front end of the K2 platform 2014-2015 Silverado 1500 (pictured below).

It also looks like the 2019 Silverado Medium Duty will feature a rather large hood, whose design is defined by three elevated elements running longitudinally – one on each side of the hood and another in the middle. As it gets closer to the front end, the hood tapers both inward and vertically, which is somewhat reminiscent of the 2014-2015 K2 Silverado.

The rather larger and prominent gap between the upper and lower facias would suggest that the 2019 Silverado 4500 and 5500 engine bay will be accessed by tilting the hood, grille and headlamp assembly forward. 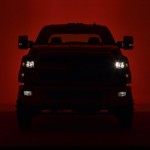 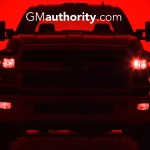 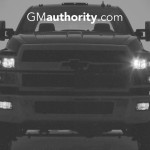 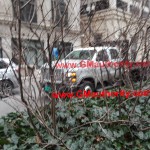 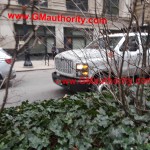 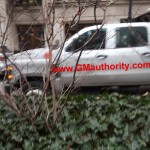 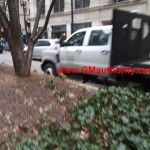 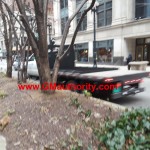 In October 2015, GM announced that it has reached an agreement with Navistar to co-develop and bring to market medium duty commercial trucks. In March 2017, GM’s Chevrolet brand announced plans to introduce a new flagship Chevrolet Medium Duty truck that would powered by a Duramax Diesel engine and Allison transmission.

In September 2017, the brand announced that the vehicle will actually consist of two models: one will be a Class 4 truck – the Silverado 4500HD – and the second will be a Class 5 truck – Silverado 5500HD. Chevrolet says that both trucks will:

In December 2017, GM Authority obtained exclusive spy shots of the vehicles undergoing testing. Then, in January 2018, Chevrolet announced that the new all-new Silverado 4500 and Silverado 5500 will be revealed at the 2018 Work Truck Show taking place March 6-9 in Indianapolis, Indiana and that both of the vehicles are expected to go into production in late 2018. Until then, be sure to follow our Chevy Silverado news coverage.