Earlier in January, we shared our expectations for the upcoming 2019 Camaro refresh, and today we have some pretty solid evidence to support our beliefs. Specifically, it seems that the 2019 Camaro will introduce a new trim level called 3LT.

That much is according to GM’s official VIN decoding document for 2019 model year vehicles filed with NHTSA on December 14th, 2017, which shows a new 3LT model with either a manual or automatic transmission joining previously-existing trim levels for the gen six Camaro. By comparison, GM’s 2018 model year VIN decoder doc made no reference to a Camaro 3LT – making the trim level new for the 2019 model year.

For the sake of comparison, the 2018 model year Camaro was offered in 1LS, 1LT, 2LT 1SS, 2SS and ZL1 trim levels. The LS and LT trims come standard with the turbocharged 2.0L I-4 LTG engine, with the atmospheric 3.6L V-6 LGX engine being optional. Meanwhile, SS models come exclusively with the atmospheric 6.2L V-8 LT1 engine, and the ZL1 is equipped with the supercharged 6.2L V-8 LT4.

Outside of adding the 3LT trim, the rest of the 2019 VIN decoder document lists the same engines as the one for the 2018 model year… which might change in the near future (read on below) 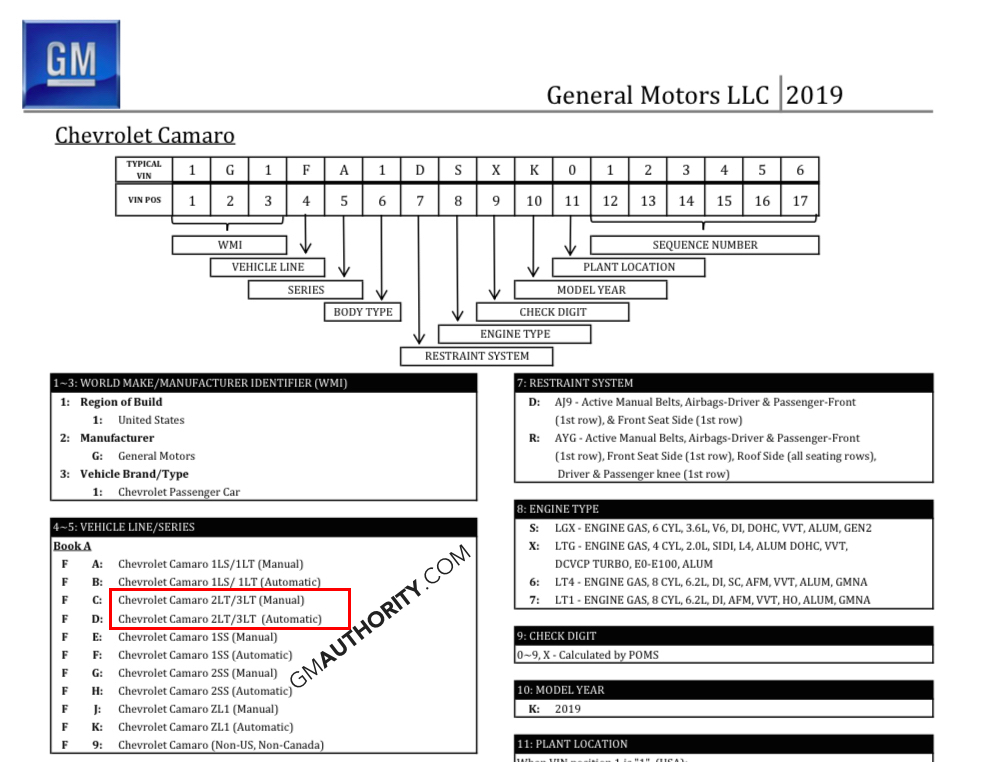 Despite delivering notable product-level improvements, the sixth-generation Camaro – which was first introduced for the 2016 model year – has seen lackluster sales. Meanwhile, its direct competitors – the Ford Mustang and Dodge Challenger – have seen significantly greater sales volume success with their sports cars. Arguably the biggest reason for the turn of events is that the gen six Camaro is notably more expensive than the fifth-gen model in replaces. As such, Chevrolet is rumored to be working on rearranging the trim levels structure for the 2019 Camaro refresh in order to become more competitive, most likely by hitting a lower price point.

Though we have no confirmation of the following, we would expect that the addition of a 3LT trim level will result in the repositioning of the 1LS, 1LT and 2LT models on the 2019 Camaro that will see these models remove content and get a lower starting price.

It’s worth noting that the VIN decoder doesn’t show any changes to the trim level structure of the V8-powered Camaro SS. The move is peculiar, given that some believe that the lack of a more affordable SS model is holding back sales of the sixth-gen Camaro. However, it could be possible that the assumption is false, and that Chevrolet believes that it can drum up sales by improving the Camaro’s value on the lower end of the spectrum.

In fact, Todd Christensen of Chevy Performance Marketing may have alluded to doing just that when he told us that Chevy still needs “to put attention on the 2.0L”. “Not that we ever abandoned it, but I think there are some things we can do to improve that a little bit,” he said.

Before we let you go, here are some words of warning: Chevrolet has yet to officially announce anything related to the 2019 Camaro refresh. As such, the information could be incorrect. In fact, GM can submit data to the NHTSA 60 days prior to commencing production of 2019 model year vehicles. And, given that production of 2019 model year GM models is still months away, the automaker has plenty of time to file changes, so we could see many more changes to the 2019 Camaro in terms of the trim level structure and even powertrain (such as the addition of a new 7-speed manual transmission). Even so, we have reason to believe that the introduction of the 3LT trim will happen.

The 2019 Camaro will represent the fourth model year of the sixth-generation Chevrolet Camaro. Outside of the aforementioned re-arrangement of trim levels, equipment, features and the pricing structure, the sports car will feature new front and rear facias – as shown by the camouflage on the front and rear ends of prototype models captured by our spy shooters. Other updates are also possible, including changes to the interior and powertrain (in the form of new engines and transmissions), along with the introduction of a Z/28 model.