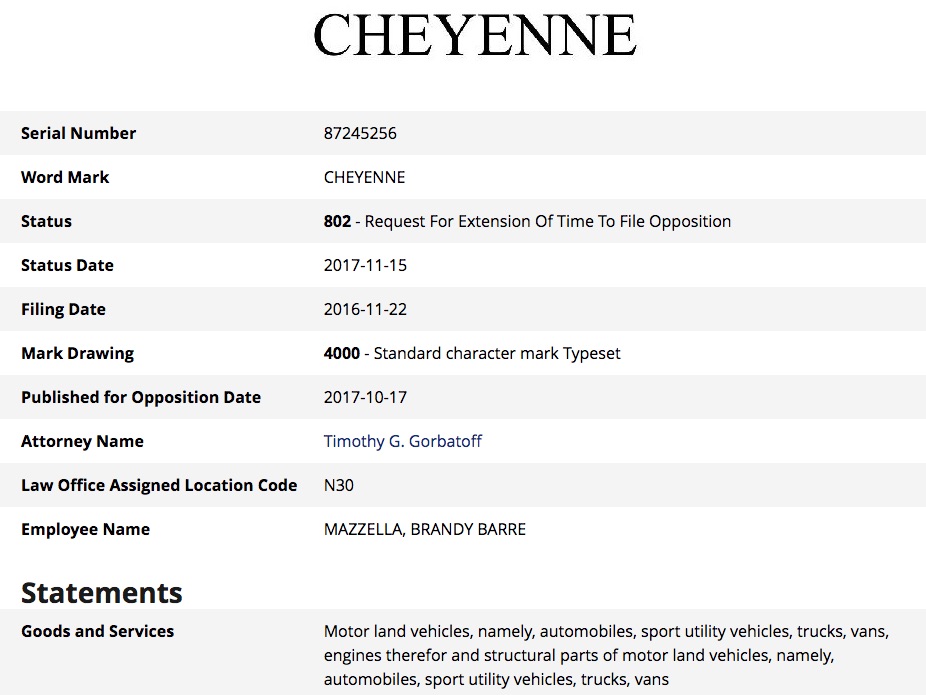 Since the initial filing date, the application has had some movement, but arguably the biggest came just recently: on October 17th, 2017, the application was filed for opposition – a part of the trademark process where the trademark application gets published in the official USPTO gazette, giving those who believe they would be damaged by the registration of a mark an opportunity to oppose its registration. Then, on November 15th, the USPTO received a request to extend the time to oppose, meaning that a person or organization has requested time to oppose GM’s application.

We don’t anticipate that this recent development will prevent GM from completing the registration of the Cheyenne trademark. Rather, it’s likely that the automaker will either modify its application or hash it out with whomever is opposing the application. But one thing is clear: GM has definitive plans to use the Cheyenne name on a real product. 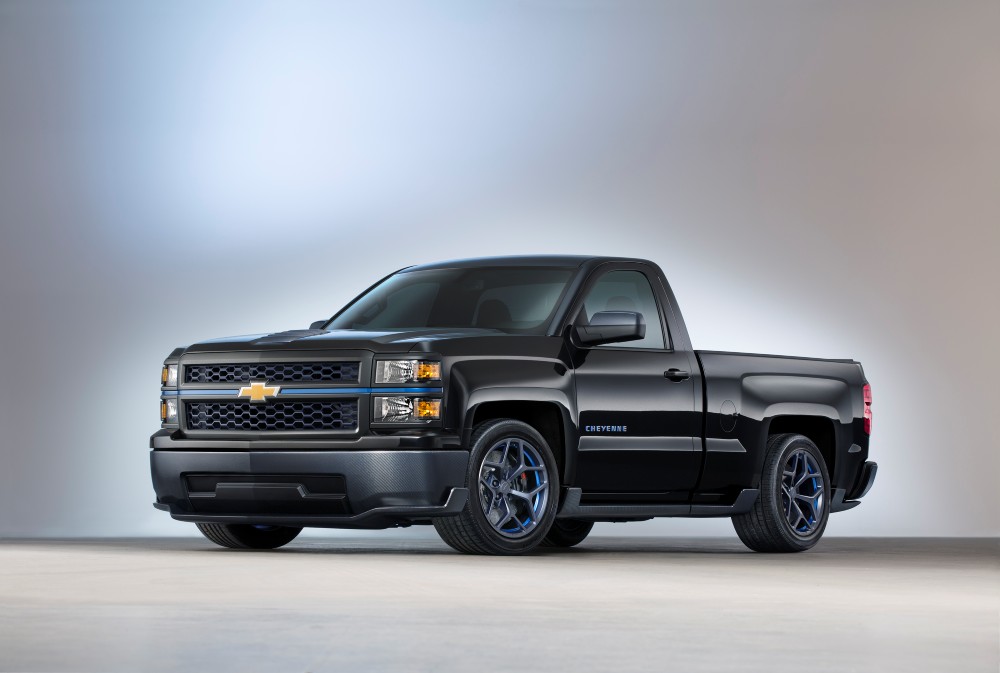 At the 2013 SEMA show, Chevrolet unveiled the Silverado Cheyenne Concept that foreshadowed a high-performance Silverado that never came to be.

The show car was a regular cab Silverado 1500 with the 6.2L V-8 L86 EcoTec3 engine making 420 horses and 460 pound-feet of torque, a motor that the GM K2 platform Silverado did not offer in the regular/single cab configuration. Engineers gave the concept an improved power-to-weight ratio, shedding 200 pounds by using a carbon fiber front and rear bumpers, side skirts, and tailgate. The diet also deletes the trailer hitch, spare tire, center console, while integrating an aluminum driveshaft and composite rear leaf springs. The show truck also featured aerodynamic enhancements in the front and the rear, with an integrated rear spoiler on the tailgate, and a hood extractor vent inspired by the fifth-generation Camaro Z/28. 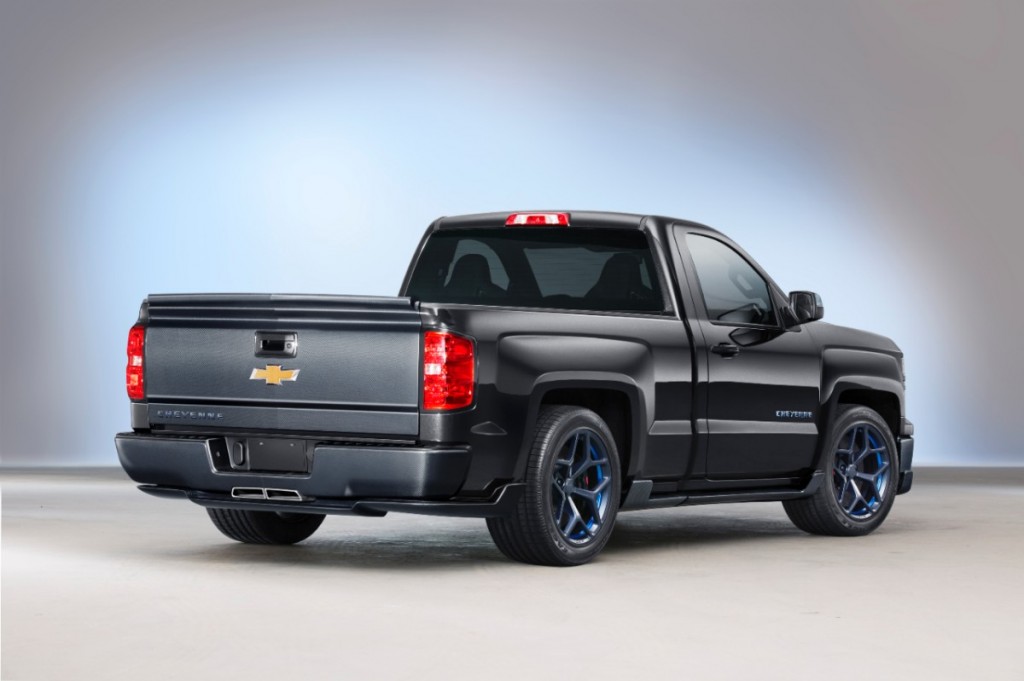 Nods to the 2014 Camaro Z/28 don’t stop there: the Brembo carbon ceramic brakes from the Camaro Z/28 were added. Not only do the units decrease stopping distance, but they also help save weight since the carbon ceramic-matrix rotors are significantly lighter than conventional steel rotors. The concept also sported the same minimalist aluminum wheels as the fifth-gen Camaro Z/28. On the inside, the Silverado Cheyenne Concept featured Recaro sport seats and a flat-bottom steering wheel.

The vehicle was well received but never saw the light of day for the current K2 Silverado. As such, it could be that a high-performance street truck called the Cheyenne would become part of the 2019 Silverado lineup. 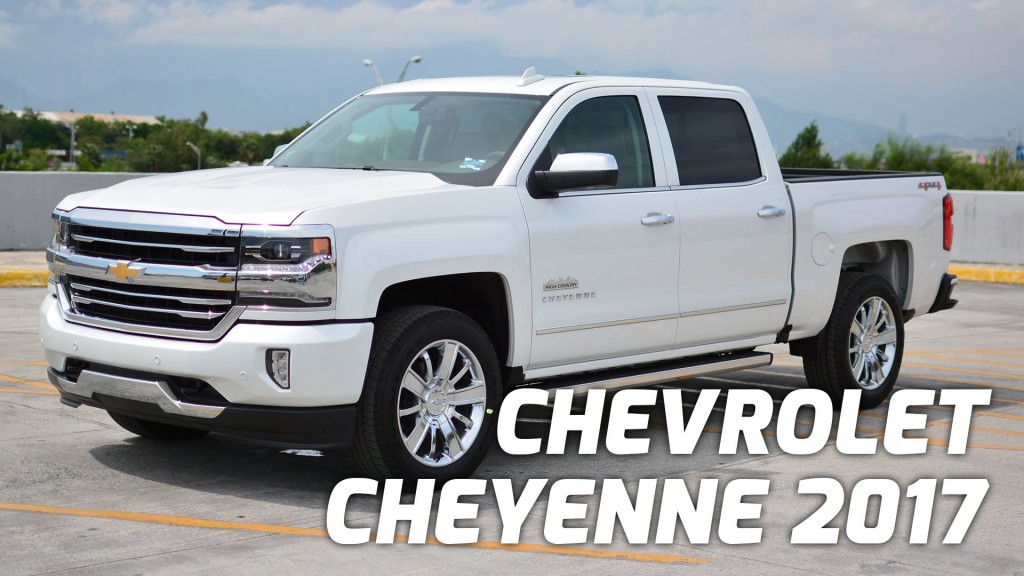 So, it could be that GM will split off the work truck model of the 2019 Silverado, calling it “Silverado”, while naming the rest of the range as “Cheyenne”. This would be a rather extreme change that we don’t necessarily see taking place. However, we do see a benefit to the dual-name strategy, since it enables Chevrolet to name work truck models – which are typically ordered/purchased by fleets rather than individual/retail customers – as a separate vehicle from the higher-end models, which would likely have a net positive impact on residual/resale values of the more high-end models.

It could end up being that Chevy pulls a fast one and introduces the Cheyenne name on a surprise variant of the Silverado we haven’t thought of yet, perhaps a high-end model to slot above or below High Country.

Whatever GM/Chevy’s plans for the Cheyenne name, we’re certain that they’re related to the 2019 Silverado. Stay tuned to GM Authority as we follow this one closely and, be sure to check out these Silverado-related resources: