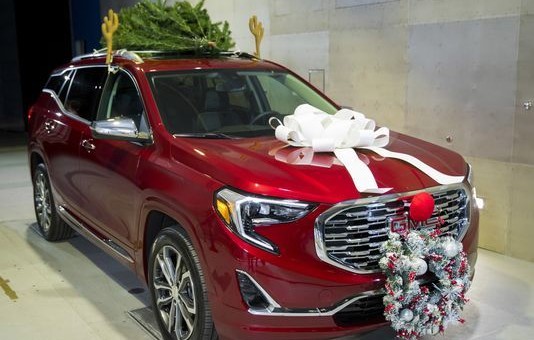 It’s the holiday season, which means numerous vehicles putzing around shopping-mall parking lots will undoubtedly boast a goofy, yet popular trend: reindeer antlers and a bright red nose strapped to the grille.

Unsurprisingly, the fun decorations don’t do any favors for fuel economy or aerodynamics. General Motors engineers strapped typical Christmas and other holiday decorations to a 2018 GMC Terrain to see their effects in the wind tunnel. With the fake antlers and Rudolph’s nose, fuel economy dropped by 1 mpg on the highway and caused a 3 percent increase in the Terrain’s drag coefficient.

Those are the most common vehicle decorations we’ve seen, but GM engineers went further. They also tacked on a roof-mounted bow, which decreased fuel economy by 3.5 mpg on the highway and increased drag by 15 percent. For those bringing home a live Christmas tree strapping it onto the roof will reduce fuel economy by 30 percent on the highway and increase the car’s drag by around 70 percent.

Finally, engineers looked at a wreath laid around the vehicle’s grille. While it didn’t have an impact on aerodynamics, the team found it could hurt cooling systems in the engine.

“It might be best to let Rudolph lead Santa’s sleigh instead of your ride this holiday season,” said Joel Ruschman, GM aero performance engineer.

Holiday cheer is good. Fake reindeer antlers are not so good.