Only 3,500 exist, and one of them is for sale via Bring a Trailer. This is a 1990 Pontiac Grand Prix with modifications by ASC-McLaren, and it’s modifications aren’t minor.

For those who don’t know, ASC-McLaren tacked on a turbocharger to the Grand Prix‘s 3.1-liter V6 engine, which boosted output from a measly 130 horsepower to 205 hp. The company also reworked the front and rear fascias and included functional hood louvers—the only sign there’s more performance under the hood. A four-speed automatic handles shifting duties,

This example is in pretty good shape, too. It has just 78,000 miles on the odometer and everything remains in working order. The owner does admit an ABS fault exists, which flashes the light and causes the pump to cycle. Otherwise, things are in good shape. 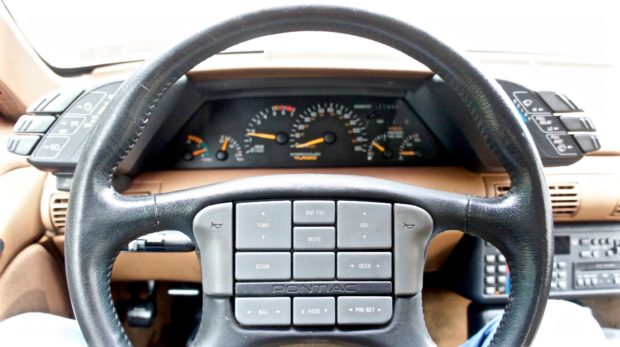 Inside, anyone familiar with General Motors in the late 1980s and early 1990s will flash back to a see of buttons and dials. The car also features the kind of neat color display, which includes a calendar, clock and an animated compass.

The car is going with no reserve and the current price is just $4,600. We don’t know if it’s a solid “classic car” investment, but it’s certainly an oddball with a premise.