I had just graduated high school when the first-generation Buick Enclave rolled off the line, in 2007. It wasn’t long before my mother leased one to replace her GMC Envoy XL, as she needed something spacious enough to cart around our family of six when the occasion struck. That’s of course to say nothing of her incredible gardening hobby that took advantage of the fold-flat rear seats. She enjoyed the Buick Enclave enough to get another one when her first lease was up. Over the span of those 10 years, Buick saw the first-generation Enclave cosmetically refreshed once. The CD player and faux ventiports persevered. Counterintuitively, the Buick Enclave continued to vault upwards in sales through the latter half of its lifecycle, from under 30,000 units in 2007 to a record high of 62,300 units in 2014 here in the United States. The Enclave remained a success, and helped change the face, and perception, of Buick through those 10 years. The rest of the lineup followed in its footsteps.

It’s not farfetched to say that the Enclave is the most significant vehicle Buick has launched in the new millennium thus far. It wasn’t a second coming of a Regal GNX, nor did it leverage the crowds of the more traditional audience that prefers the boaty Century and LeSabre to the coming of the crossover. It entered a new frontier, and was welcomed by large upper middle class families in flocks. Soon after, it was a posterchild for the still-ongoing, refreshingly consistent (if not a little cheesy) “That’s a Buick!” ad campaign. In the midst of all the welcoming allure, Buick also spawned a practical lineup, now with three crossovers that account for 77 percent of all brand sales here in America. It all started with the Enclave.

In the legacy of the first-generation Enclave, the all-new 2018 Buick Enclave has one important mission: Don’t f*ck it up.

With that being the unofficial mission, the 2018 Buick Enclave retains a familiar size and shape. 3 rows, for seven passengers. The second-row bench seat makes way for more premium captain chairs across all trim levels. This is fitting because not only was the take rate less than five percent for the second-row bench, but the Enclave also saw it’s upper-end trim levels make up roughly 90 percent of total sales volume. This in turn motivated the Buick team to send the Enclave a few more notches upmarket, including a higher MSRP with the newly introduced Avenir trim level, ($56,690).

What does the 2018 Buick Enclave Avenir provide us, over all things? Seven seated serenity. The entire car feels designed, engineered and built around that phrase. There isn’t anybody out there who, after driving one, thinks the 120-inch wheelbase SUV is either loud or crude. If so, they’re lying. The wind noise? Even quieter than before. The seats are noticeably relaxing. A bumpy ride is absent. The 310 hp, 266 lb-ft 3.6L LFY V6 is even more hushed, and its stop/start system is as seamless as it gets today. Best of all, the 9-speed transmission is barely noticed, save for a few low speed agitations. For now we’d call them outliers. 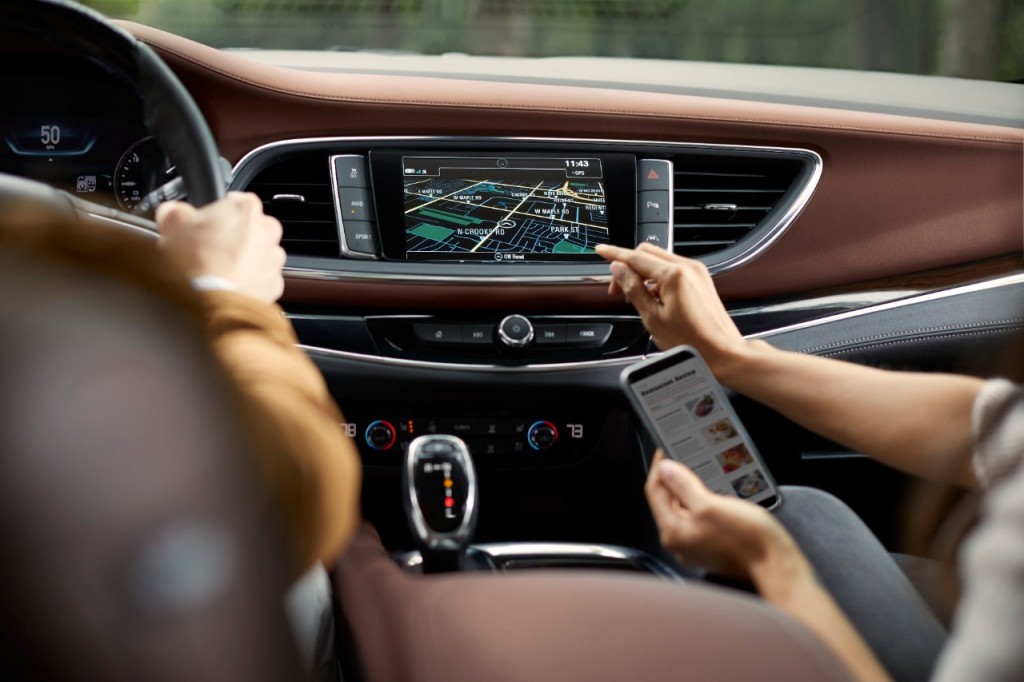 Seeing as this is a family vehicle, the 2018 Buick Enclave Avenir comes equipped with six USB ports, a 120-volt outlet, an OnStar 4G LTE Wi-Fi hotspot and five years of the OnStar Basic Plan (at no additional cost). Other technologies include an industry-leading myBuick app, which helps owners keep tabs on their maintenance schedules, as well as being able to unlock/lock and start the 2018 Enclave remotely from a phone. And for the first time ever in a Buick, there’s an integrated cabin ionizer in the Enclave Avenir. While it’s no HEPA filter, its charged emissions of ionized particles will cling to various allergens and odorous materials, at which point they won’t be part of the floating air anymore.

this connectivity plan features OnStar Smart Driver, an opt-in service designed to help owners maximize their vehicle’s overall performance and (based on an all-too-vague framework such as speed and acceleration/braking methods) become better drivers. There’s also Teen Driver, Rear Seat Reminder, along with Apple CarPlay and Android Auto compatibility. Safety features are a long list, highlighted by seven airbags, ultrasonic forward and rear cross traffic alert, the safety alert seat, and lane departure warning with lane keep assist. The expensive safety tech will always be good. But an aware and skilled driver will always be better, and cheaper, in our opinion.

In terms of fit and finish, the Buick Enclave Avenir ranks somewhere above its 2018 Chevrolet Traverse High Country cousin, but below the rank of something like an Audi Q7. But the German can be much more expensive, so one could say it’s apples and oranges. The interior comes off as inoffensively modern and sleek, with the touch screen embedded straight into the dash serving as the main centerpiece. Pretty much everything that somebody would touch regularly is well textured and confident to the touch, but points have to be docked for a headliner that seems to have come from ten years ago, and real wood shouldn’t be this hard to ask for in a vehicle that scrapes sixty grand. I’d voice about how the Enclave Avenir should also have something of a stronger engine than the updated 3.6L from the last-gen model, but I know I’ll be outvoted as that’s not why people buy this thing. Then again, the LFY V6 didn’t come off as overly lethargic or protesting under the weight of the vehicle and the duress of my right foot. Simply put, it was sufficient.

The 2018 Buick Enclave Avenir we tested also came with a GKN-sourced twin-clutch all-wheel-drive system, as seen on vehicles ranging from the Ford Focus RS to Range Rovers. This system cleverly modulates torque sent to either rear wheel in the name of grip, which will come in handy for those family trips to Marquette during the winter, while making use of its 5,000-pound maximum towing capacity. Unhitch that trailer, and the 4,300+lbs Buick Enclave Avenir handles well enough to the point that it calls the lower-slung and surprisingly athletic (yet slow-selling) LaCrosse into question. It simply drives smaller than its proportions suggest. This was made evident as it spent hours ebbing and flowing through the nearly mystic pavement noodled throughout northern Georgia and into South Carolina. No, it’s not a performance SUV. It’s just wonderfully compliant. This was perhaps the biggest surprise from our brief experience with the 2018 Buick Enclave. We knew the cabin was going to be hushed. We knew it was packed with a suite of technological conveniences. Now we know the handling is proportionately as well done as everything else.

With the strong familiarity in my mind of the outgoing Buick Enclave, and how well it served as a premium multi-tool for a family of six, it would have been easy for the new vehicle to misstep hard into another direction and miss the allure of why people people bought the original one in the first place. With the mission clear, the 2018 Buick Enclave has improved upon every facet that made the old one such a sales stalwart. And with the addition of the Avenir, the nameplate has all of that is necessary to gracefully ascend to new heights. They definitely didn’t f*ck it up.