Maybe too similar to the modern day auto market, the collector-car market has begun to favor trucks and SUVs. We’ve seen values for Blazers, Broncos and other vintage utility vehicles start to skyrocket as they cross auction blocks across the United States.

Chevrolet itself is aware, and as part of its centennial truck celebrations, it highlighted nine six-figure Chevy pickups sold at auction in the past few years. Not surprisingly, all of them were sold in the past eleven years, just as the collector car market caught its hot streak and as SUVs and trucks gained popularity. Without further ado, here are nine six-figure Chevy pickups. 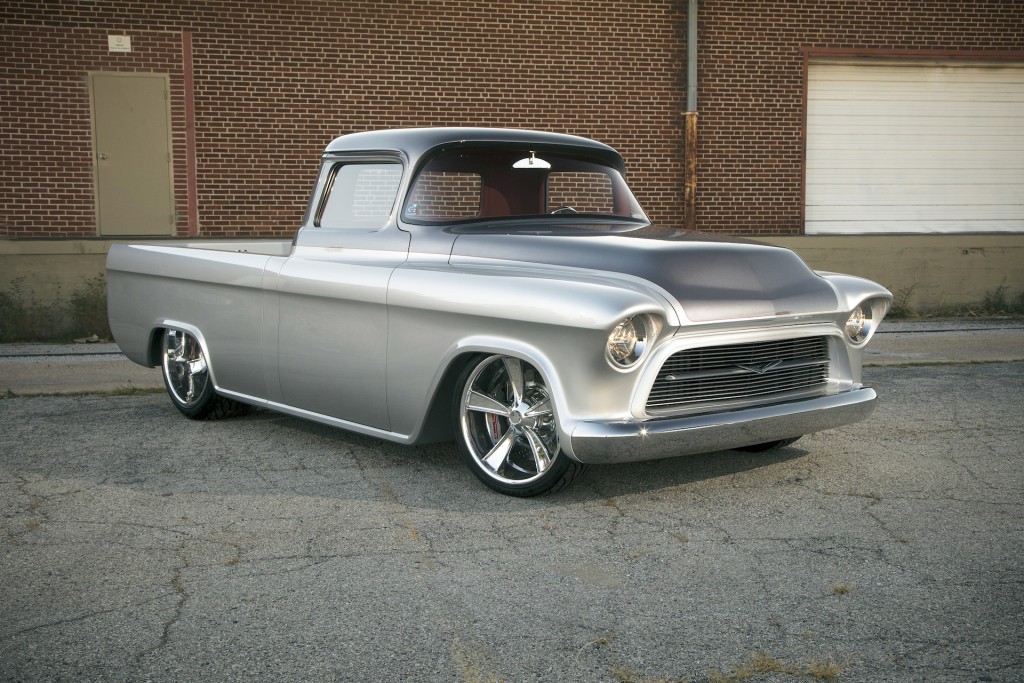 This 1957 Chevrolet 3100 Custom Truck, better known as “Quicksilver,” is a 2014 Barrett-Jackson Cup winner and has been recognized as “one of the finest custom truck builds of all times,” according to Barret-Jackson Auction House. Laying claim to this honor came with a hefty price tag, and the truck was sold for $214,500 in Scottsdale, Arizona in 2016. Nearly everything on this vehicle, from the 540 big block, 650 horsepower Chevy engine, to the handmade and reshaped body panels, was customized by Hot Rod Garage in Sand Springs, Oklahoma. 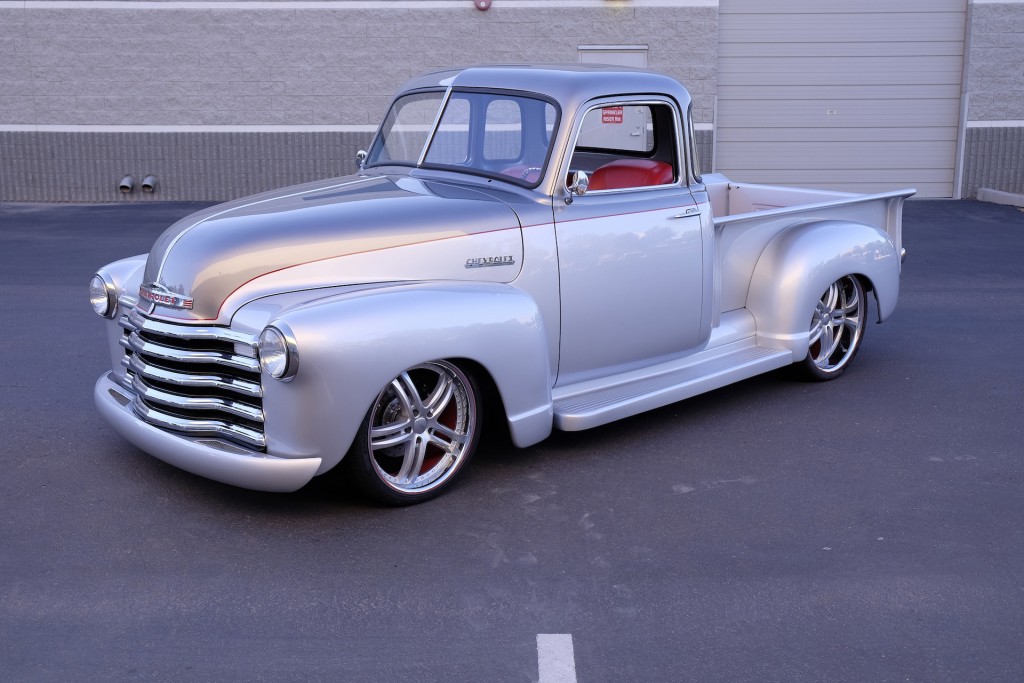 You’d be hard-pressed to find a single part on this 1950 Chevrolet 3100 Custom Pickup that has not been customized. First showcased at the SEMA show, this vehicle sold for $205,700 in Scottsdale, Arizona in 2017. The truck features extensive modifications including an all-new TCI custom chassis with independent front suspension and a 500 horsepower Chevrolet Performance Hot Cam LS3 crate engine with 4L65E automatic transmission. Inside the truck features a reshaped dash and handmade, redesigned bench seat, console, door panels and headliner. 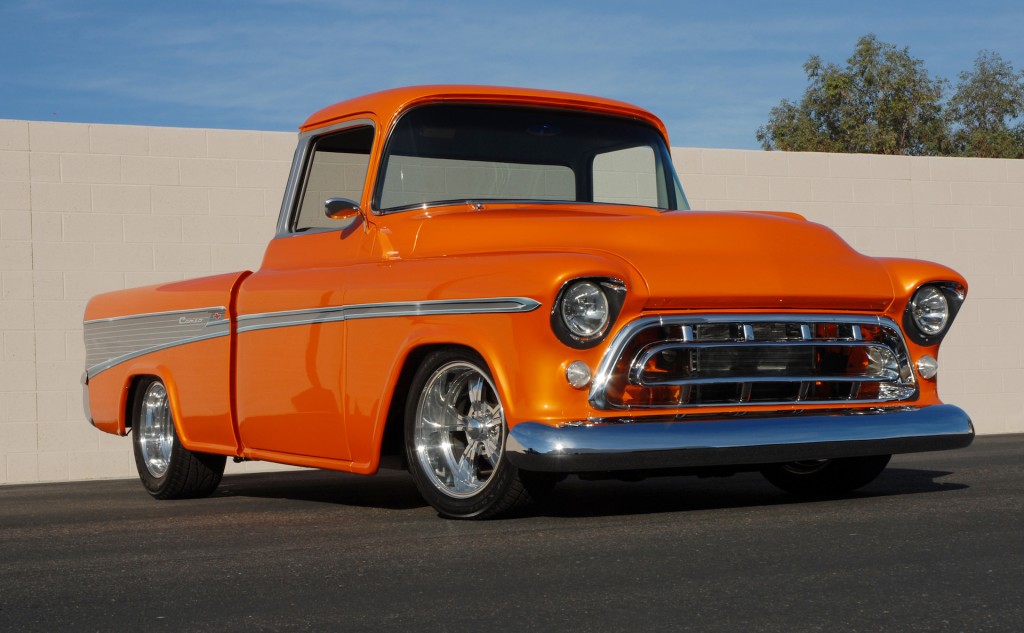 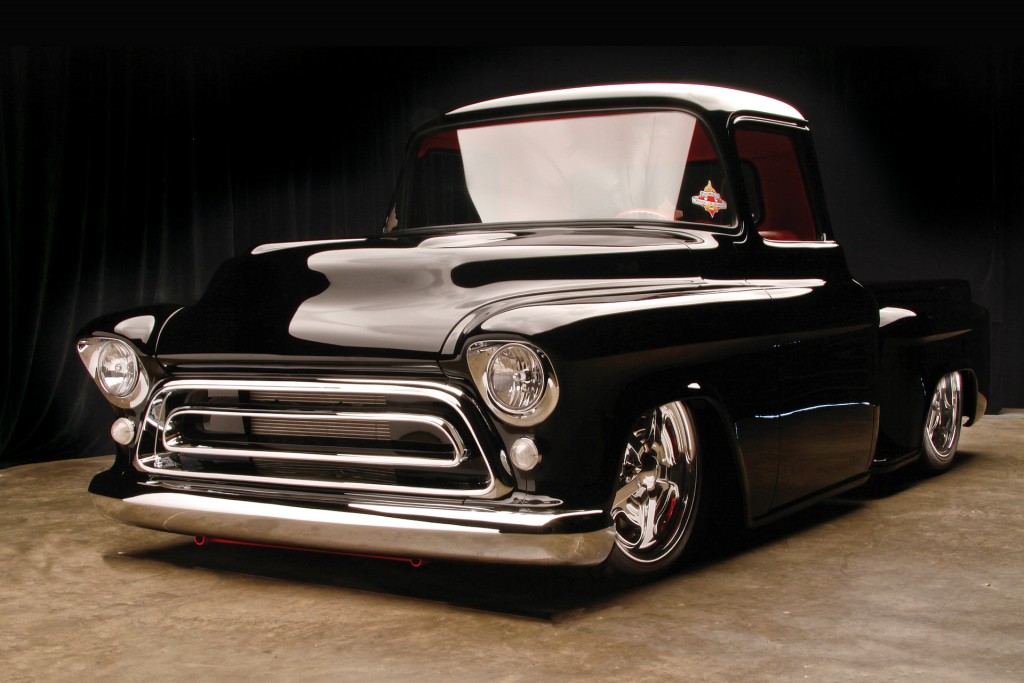 It took 7,000 man hours and thousands of one-off, hand crafted parts to build this 1957 Chevrolet C-6 Custom Pickup, sold for $148,500 in Las Vegas in 2011. This truck comes with a 402cid LS3 motor, a complete Corvette C6 suspension and drivetrain with a 6-speed transaxle and a full Air Ride suspension. If that wasn’t enough, this truck is also a recipient of a GM Design award at SEMA 2009 and a Mothers Choice Award at SEMA 2010. 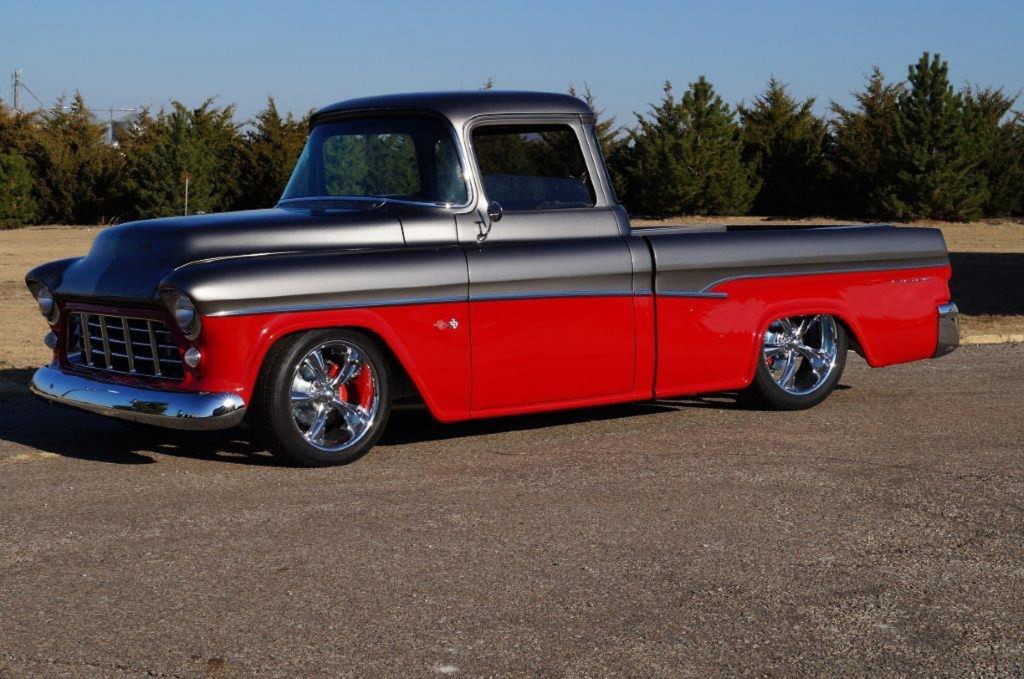 This professionally-built 1955 Chevrolet Cameo Custom Pickup features several eye-catching outer modifications including a tailgate inspired by the 1955 Nomad, reformed cab corners to flow with the 1957 Bel Air side trim and an engine bay that is smoothed over with covers. The Titanium Grey and Lipstick Red exterior is complemented by a red leather interior, complete with Dakota Digital VHX gauges, a graphite-wrapped Billet Specialties wheel and a Kenwood stereo system. 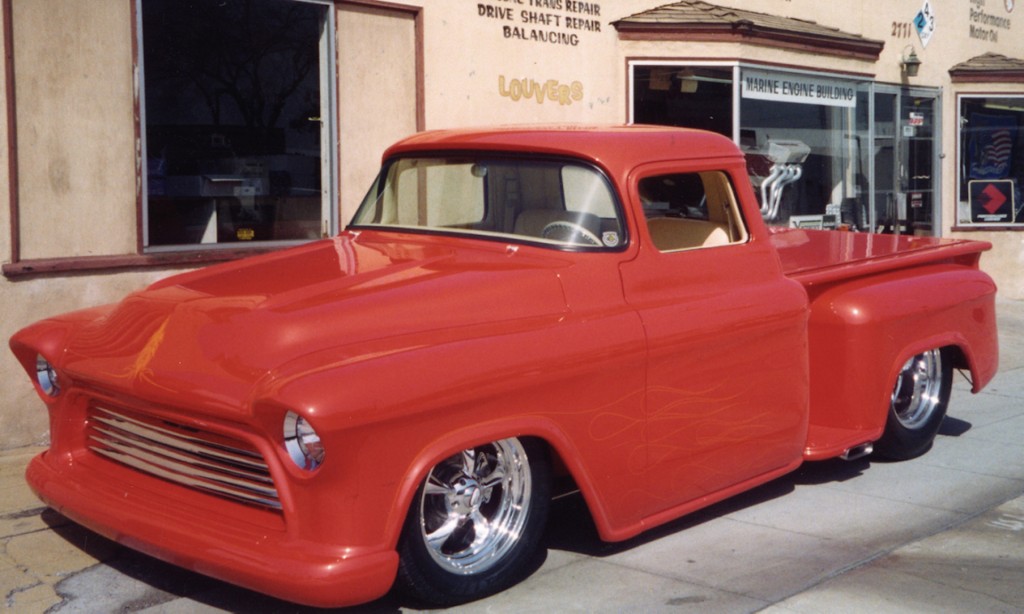 With six years of customization work and six magazine appearances, it’s no wonder that this 1955 Chevrolet 3100 Custom Pickup made its way into the top ten. This pickup sold for $132,000 in Scottsdale, Arizona in 2006. The Kandy Orange exterior is complimented by a tan leather interior, both of which have been meticulously detailed by Cimtex Rods in Jarrell, Texas. Named by Street Trucks Magazine as one of the top 50 trucks of the decade, this award-winning truck can boast the Goodguys Truck of the Year 2002-2003 and a Boyds Pro Pick at Scottsdale, Arizona and Columbus, Ohio, as well as top awards at ISCA events and Super Chevy shows. 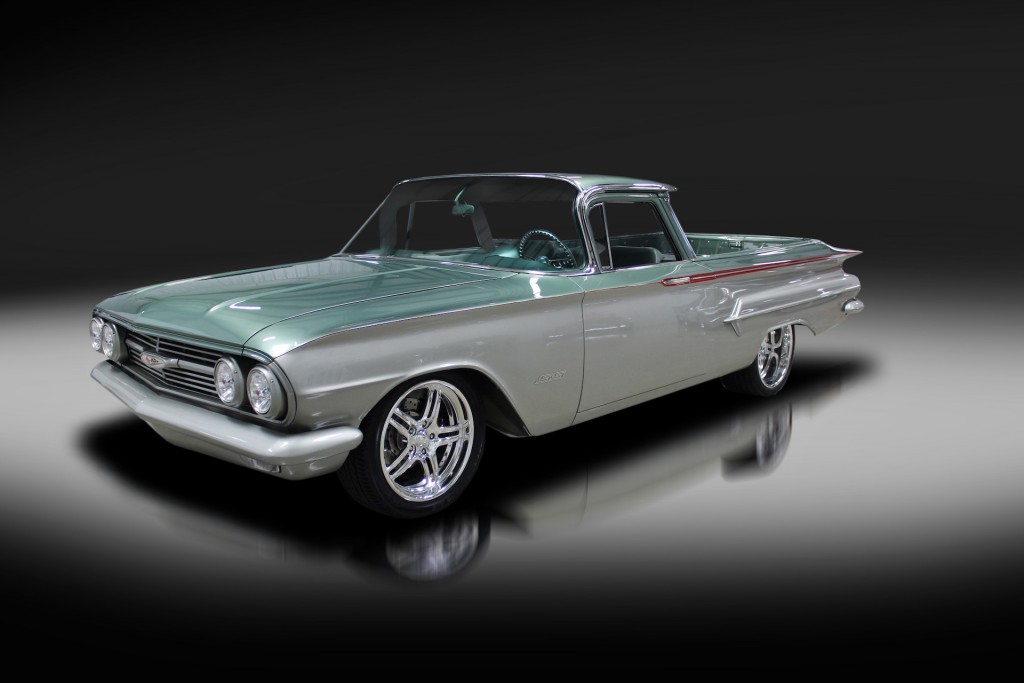 This 1960 Chevrolet El Camino Custom Pickup is a one-of-a-kind truck sold for $126,500 in Palm Beach, Florida in 2017. Nearly every piece of this vehicle has been customized, from its GM ZZ 502ci crate engine with a Ram Jet fuel-injection system to its fully custom leather interior and highly detailed and painted undercarriage. 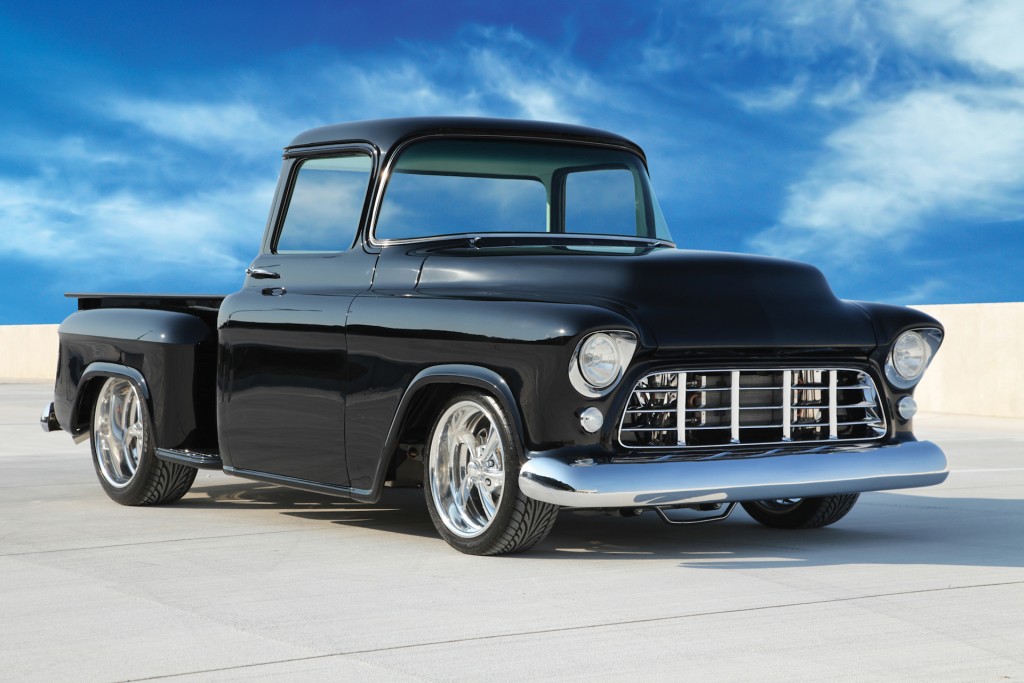 This gem of a vehicle, a 1959 Chevrolet 3100 Custom Pickup, sold for $121,000 in Scottsdale, Arizona in 2014. The truck is completely rebuilt, keeping nothing but the body from the original vehicle. It was built from the ground up beginning with a high-strength chassis complete with a 4-link setup, chrome 9″ Currie rear end with 3.70 gears and a Detroit Tru-Trac differential. In addition, a look on the inside will reveal a white leather interior with black accents, added air conditioning and green tinted glass. 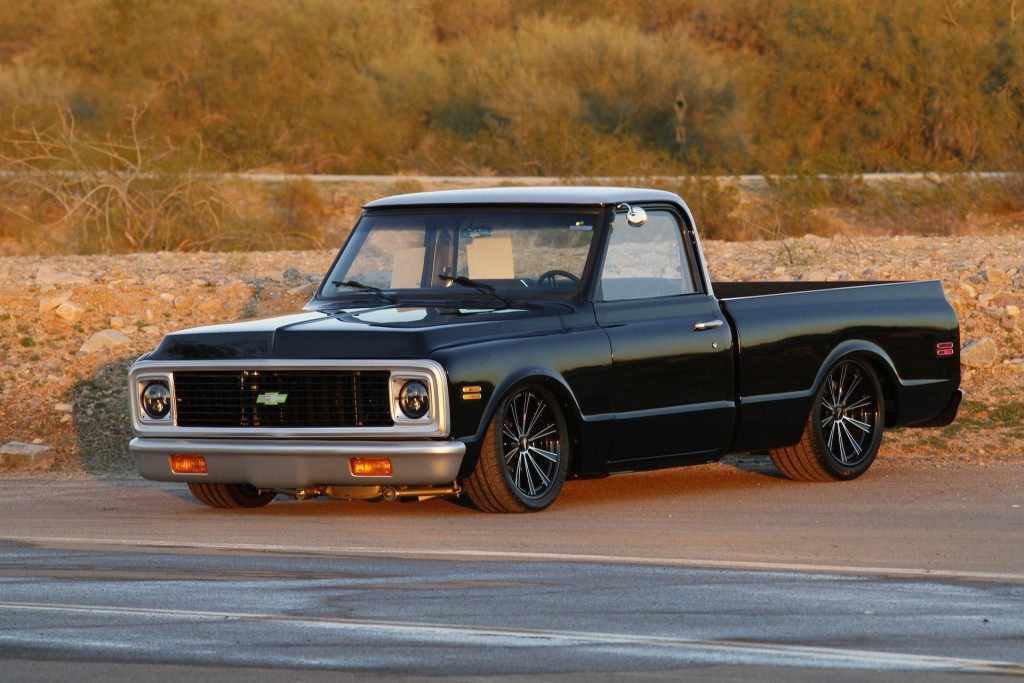 This 1971 Chevrolet C-10 Custom Pickup, lovingly called “Adel” by its previous owners, sold for $110,000 in Scottsdale, Arizona in 2014. After being donated to the Austin Hatcher Foundation for Pediatric Cancer, the truck was rebuilt and customized to be sold on behalf of the foundation. It features a Chevrolet Performance LS3 E-ROD “connect and cruise” powertrain that includes a 430 horsepower LS3, 4L65-E transmission, transmission attachment hardware and Chevrolet Performance controller kit. Additional componentry includes Odyssey Batteries, a complete air ride suspension from Ridetech, BeCool radiator system and Goodmark Industries body panels.