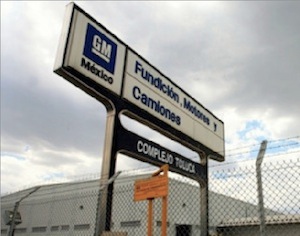 General Motors was spared in the recent Mexican earthquake that has taken the lives of nearly 300 people. Despite the widespread damage and collapsed buildings, GM’s operations were running normally, according to Automotive News.

Specifically, GM operates facilities in Toluca, outside of Mexico City, Mexico, and reported no major damage and normal operations. In general, many automakers reported their facilities were unscathed by the natural disaster that rocked the country.

It’s a testament to Mexico’s auto industry, which has grown tremendously since the late 20th century. Foremost, automakers that construct plants in the country build their facilities to coincide with their national regulations and code. Any GM plant built will, in turn, meet U.S. standards. Secondly, following the country’s disastrous 1985 earthquake, the country stepped up its efforts to take construction more seriously and implement strict standards.

“While we regret the unfortunate victims, we consider the economic impact of these earthquakes to be rather limited,” Mexican bank Banorte wrote in a research note. “Mexico has learned the lessons of previous deadly tremors, such as the quake of 1985 that cost the lives of more than 10,000 people and the collapse of more than 400 buildings.”