Despite only being around since calendar year 2009, the GMC Terrain has emerged to be the second-best selling vehicle in the brand stable, behind (but well behind) the iconic Sierra pickup truck. Largely in part of the flourishing crossover market as a whole. Eight years later, and it’s high time that the GMC Terrain found itself anew. The outgoing model may have enjoyed copious spaciousness but straddling the compact and midsize segment, but its chassis, busy interior and lame entry level engine were all ripened beyond their prime. The all-new 2018 GMC Terrain, based on the GM D2 platform, aims to amend these ailments of aging. And by launching in Denali trim out of the gate, it will also deliver a level of upmarket sophistication from the start. Today, we’re going to cover the 2018 GMC Terrain Denali. 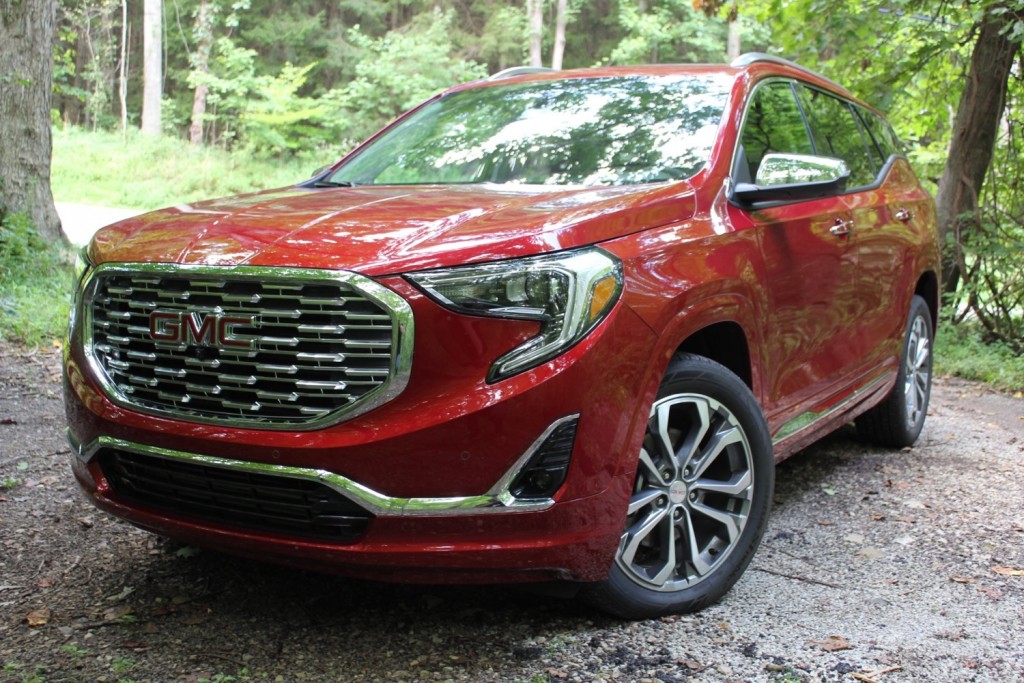 Early critiques of the 2018 Terrain design have described it as “polarizing“. At first blush, from the stock photos, it’s easy to see that. In person, it carries an individualistic sharpness from nearly every angle. Moreover, it’s a tall glass of water in a desert of risk-averse appearances in the CUV market. From that approach, it could and should attract buyers that seek the added space and ride height that this segment provides, and who are also aiming to visually separate themselves from the pack. On the inside, the 2018 Terrain Denali continues a tradition of the pickup truck archetype, borrowing the steering wheel from its larger SUV family members and similar center stack resemblance. It’s opposite of the softer, more car-like features of its platform mate, the 2018 Chevrolet Equinox. But nobody would be the wiser when judging by looks alone. 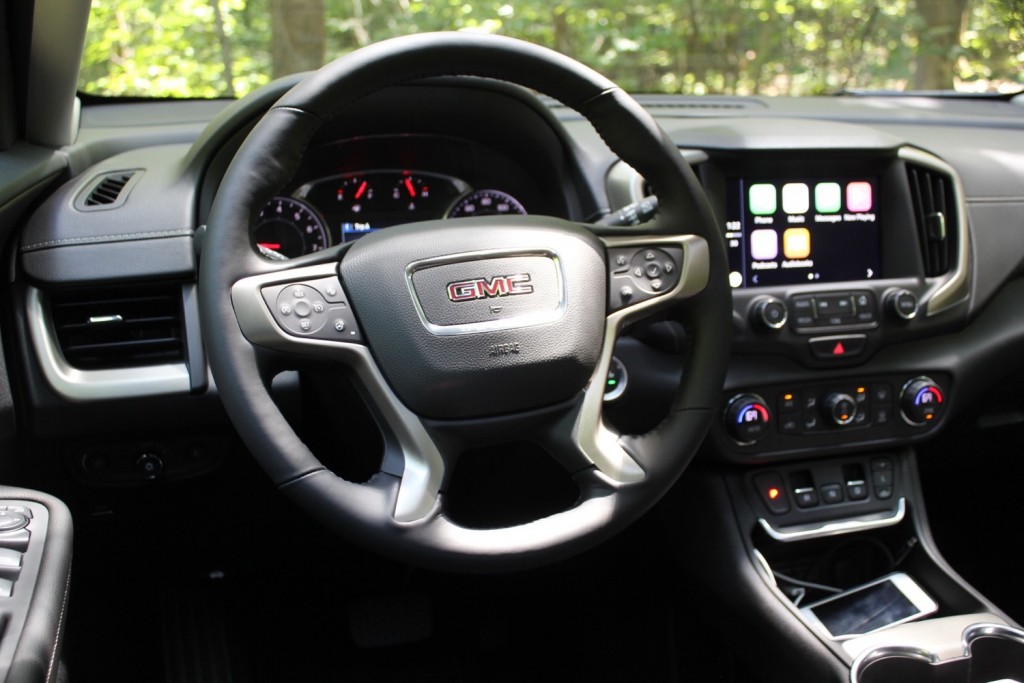 From the interior, everything is where it should be. The 2018 Terrain Denali is adorned with aluminum trim, heated/vented seats, a heated steering wheel, a digital info display screen, 8-inch “GMC Infotainment System” (suggesting that the Intellilink branding is going by the wayside), automatic headlamp/highbeam control, and an inoffensive seating position. Though we do wish that the Terrain Denali did come with real wood accents and other features like adaptive cruise control. The five-seat premium crossover comes in at $44,450 as tested, and therefore we figure it’s not too much to ask.

The main curiosity of the 2018 GMC Terrain Denali is its evolutionary gear selector. Rather than going with a traditional cabled selector (Equinox), digital shifter (as seen on Chevrolet Bolt EV and CadillacXT5, among others), or even a rotary dial, the all-new GMC Terrain features a combination of buttons and toggle switches – five selections total. Figuring it out is pretty seamless from anything more conventional, and exaggerations during its introduction are fairly unwarranted. While one may miss a lever to rest their hand on, they will at the same time appreciate the extra space that the new configuration opens up. Especially for the pocket dumpers. The ones that unload their phone, wallet, house keys, work badge, loose change, multitool, cortado, and water bottle all visibly onto the center console. The storage bin located in the middle can swallow all of those things, too.

During the test, we discovered that the 2018 Terrain gear selector will immediately shift into “Park” once the driver turns the vehicle off. So if somebody out there were to be absent-minded enough to not return the Terrain into “Park”, the nannies embedded in the vehicle will do so. This level of detail could save a life someday. As could the Rear Seat Reminder. As could the 360-degree surround view backup camera system – exclusive to the Denali trim. And who knows, that OnStar 4G LTE Wi-Fi could be clutch, as well.

The only thing we honestly didn’t enjoy about the 2018 Terrain gear selector was that the buttons and switches all felt on the cheap side. We’d overlook it in the base model, but the range-topping Denali trim deserves a more premium look and texture. Not a deal breaker by any means, but it’s the little things.

The 2018 Terrain Denali can only be configured solely with a 2.0L turbocharged engine (the familiar 2.0L turbo LTG), and should likewise solely have a special material for its Electronic Precision Shift layout over lesser trims. 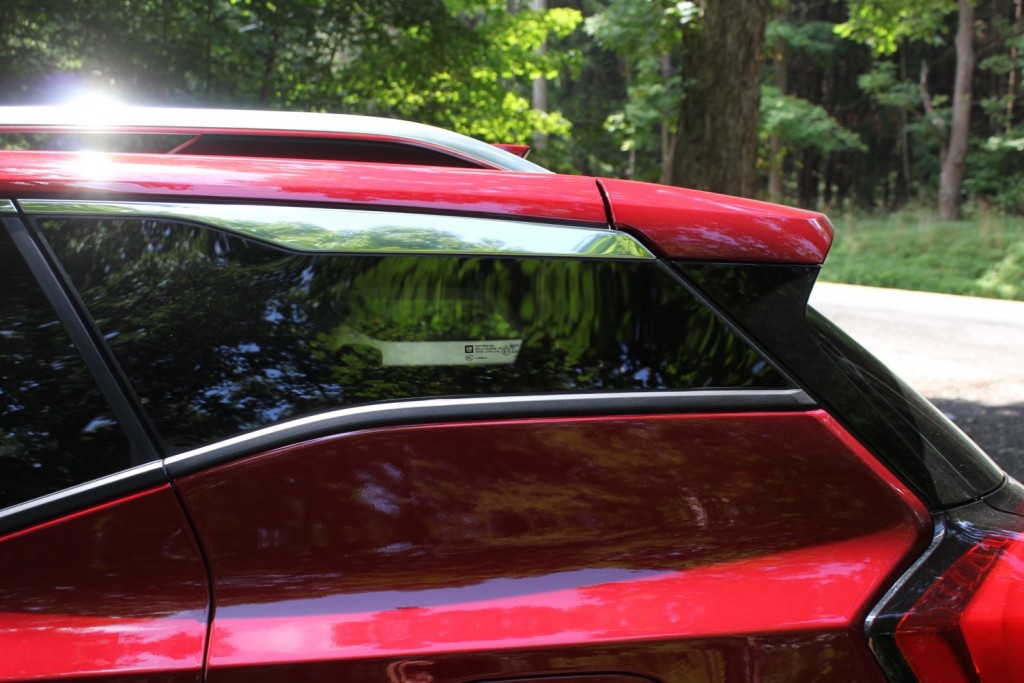 As mentioned above, the Terrain Denali has a single engine configuration. If you want a Terrain with a diesel motor, you’ll have to go with SLE or SLT trim. The GM 9-speed automatic transmission aced the hilled and twisting roads of Pennsylvania, where it constantly shifted smoothly and remained in optimal gear. The only blemish we observed in the gearbox was in stop-go traffic situations, when it would occasionally feel the need to lurch, or hunt for a gear when it didn’t need to. Other than that, it’s entirely competent.

Despite the omission of a diesel option from the 2018 Terrain Denali, the 2.0T motor pairs wonderfully with the crossover. It’s the perfect amount of punch for a vehicle of this size, and the unique suspension calibration for the Terrain Denali provides a more precise and athletic driving feel than originally anticipated. And it doesn’t even have Magnetic Ride Control. The added power, upscale interior, and the special chassis tuning definitely separates the 2018 Terrain Denali from its brethren, and even more so from its Chevy Equinox platform mate. We’ll stop short of calling it a performance SUV, but it definitely feels close.

If you’re in the market for a ~$41,000 SUV, give the Terrain Denali a look. It’s a spaceship compared to its predecessor, in that it feels sharper, boasts a more premium interior, drives more precisely, and carries an individualistic swagger. And, we promise, the new shifter configuration won’t bite you.