There has been many a complaint about Chevy not offering the mighty 6.2L V-8 L86 engine in its current 11th-generation Suburban, instead relegating its flagship SUV to only use the less powerful (and much less exciting) 5.3L V-8 L83 mill. We’re not here to discuss that. Instead, we’re here to present the differences between the “normal” Suburban and the much less-known Suburban 3500HD.

In typical GM fashion, the “HD” denotes Heavy Duty. And in the case of the Suburban 3500HD, the vehicle is available only to fleet customers. Its starting price of $80,215 is a whopping $30,000 more than the $49,915 starting price of the regular Suburban that’s available to retail and fleet customers alike. So what’s that extra $30k good for? In three words: more payload capacity. A lot more.

The Suburban 3500HD is powered by GM’s tried-and-true Small Block 6.0L Vortec V-8 L96 gasoline engine based on GM’s fourth-generation Small Block architecture. As of this writing, the architecture represents the last generation of the Small Block family, as the fifth-gen Small Blocks superseded it in 2014/2015. In the Suburban HD, The 6.0 V-8 is mated to a 6-speed 6L90 heavy-duty automatic transmission driving all four wheels. The combination makes a cumulative 360 horsepower and 380 pound-feet of torque. If that powertrain combination seems familiar, that’s because it’s the standard setup in GM’s Chevy Silverado HD/GMC Sierra HD. In the Burb HD, it delivers some very impressive standard payload capability of 4,405 pounds from an 11,000 GVWR (gross vehicle weight rating).

It’s worthy to note that the L96 is an old-school mill: it has been around for roughly a decade without many changes. Rather than being direct-injected, the motor features Sequential Fuel Injection (SFI). In fact, the biggest change to the engine was the addition of Variable Valve Timing (VVT) back in the 2008-2009 timeframe.

By contrast, the “regular” Suburban is powered by the Small Block 5.3L EcoTec3 V-8 L83 gasoline motor that is part of the current, fifth-gen Small Block family. Good for 355 horses and 383 pound-feet of torque, the L83 V-8 is mated to a 6-speed 6L80 transmission. The less beefy combination results in a GVWR of 7,500 pounds, which is much less robust (by a factor of 3,500 pounds) than that of the Suburban HD. It’s that higher GVWR that enables the HD variant to be capable of accommodating up-armor applications — such as toughening and bulletproofing… while also not doing the Suburban HD any favors in the towing department. 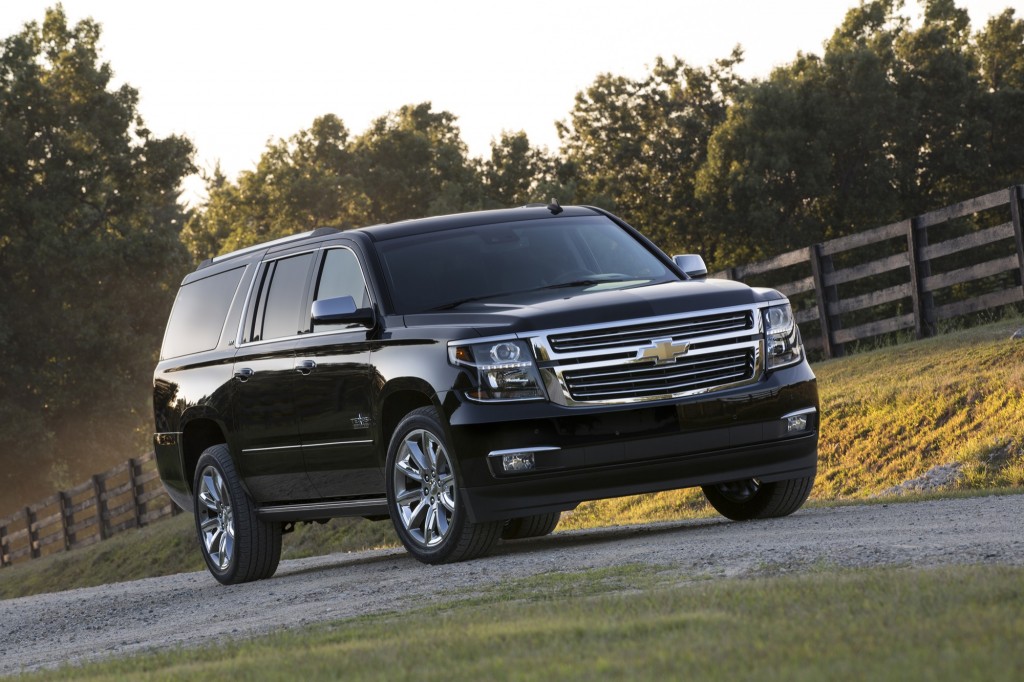 The Suburban HD also includes the G80 4.10:1 heavy-duty locking rear differential and an Autotrac 2-speed active electronic transfer case, controlled via rotary controls inside the cabin. The regular Suburban, meanwhile, gets a single-speed transfer case with a 3.08 axle as standard. The two-speed transfer case as on the Suburban HD is available as part of the optional Maximum Trailering Package, though in the non-HD model it is paired with a 3.42 axle.

What’s more, the Heavy Duty Suburban also features a standard towing package that includes a trailering hitch platform, 7-wire harness with independently-fused trailering circuits mated to a 7-way sealed connector and 2″ trailering receiver. These features can be ordered on the regular-duty Suburban as part of the aforementioned Maximum Trailering Package.

As far as trim levels go, the Suburban HD is available in two trim levels: LS (1LS) and LT (1LT). The regular-duty model, meanwhile, is also available in the LS and LT trims, while also adding the range-topping Premier (1LZ) option.

And there you have it — a comparison of the key features between the “regular” Suburban (sold to retail and fleet customers) to to the Suburban 3500HD (sold exclusively to fleet customers).