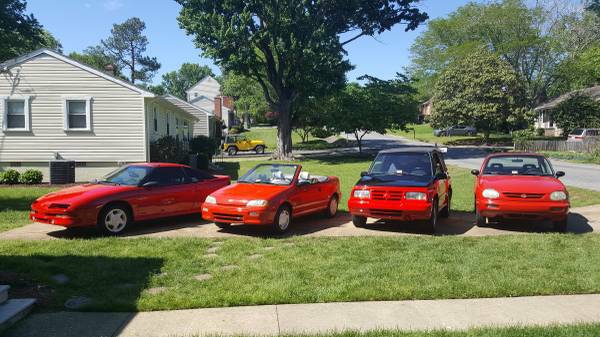 We see some oddball stuff crop up on Craigslist. This is either a super cool collection, or incredibly lame, depending on the eyes of the beholder. We’re leaning towards super cool.

Up for grabs are four Geos, the long-gone General Motors-Toyota-Suzuki-Isuzu brand tie-up in the United States. It was meant to be the “hip,” entry-level brand for the kids when it came about; its demise was not unlike Toyota’s Scion brand. You can’t tell the kids what’s cool.

We digress. The collection includes a 1996 Suzuki X-90, a 1996 Geo Tracker LSi, a 1993 Geo Metro and a 1991 Geo Storm GSi. The Metro, X-90 and Tracker each hail from Suzuki, while the Storm is based on the Isuzu Impulse. This particular Storm also features the coveted “Handling by Lotus” badge. Yes, a Japanese-American brand received a touch from the British sports car marque. The 1990s were great.

Someone is poised to pick up this obscure collection, and the price isn’t outrageous either; the seller asks just $12,000 to take all four cars to a new home.