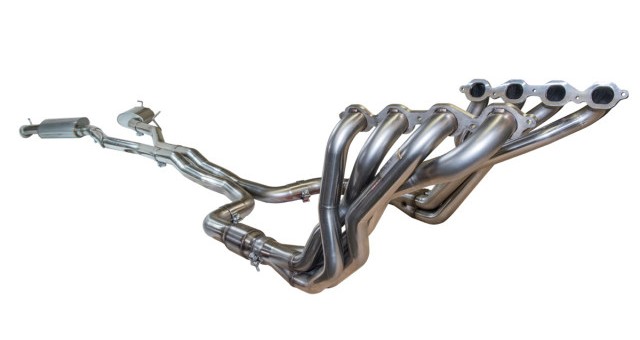 The fellas at Hot Rod recently received a question from a confused reader who cited Corvette forum “experts” as saying, “tube headers are a waste of money for street-driven vehicles.” So, they decided to investigate the matter themselves.

The feature begins by referencing a comparison done with a small block 350 V8 with the stock cast-iron exhaust manifolds versus long-tube headers with 1⅝-inch primary tubes and 3-inch collectors. Both applications utilized a 2.5-inch Hooker Headers cat-back exhaust.

Despite it being a very mild powerplant, the 350 still saw gains throughout the entire testing range of 2,200 to 5,100 RPM, and saw peak gains of 6.7 horsepower and 6.6 lb-ft of torque. This observation suggests that headers are not objectively a waste of money as it relates to performance. Though that’s not to say that, for most, the biggest difference will be heard rather than felt.

Since the reader who originally reached out to Hot Rod owns a 1968 Corvette powered by a 327 cubic-inch L79 equipped with Headman headers, the Hot Rod article kept its attention to this specific application. He suggests that — between the flat cams, Fuelie heads, and Rochester Quadrajet carb — a set of long-tube headers, like the ones Holdener used, in conjunction with a full, 2.5-inch dual exhaust and decent mufflers, should net gains of about 10 to 20 horsepower over the stock headers.

If you ask us, a growlier exhaust and a small bump in power is always welcome.

For more on header comparisons, check out this episode of Engine Masters, where they compare cast-iron manifolds, shorty-headers, and long-tube headers.